JERUSALEM — In the face of renewed public pressure, Israel decided this week to accelerate the immigration of Ethiopians who qualify under the Law of Return.

At the same time, the government is standing firm on its refusal to recognize as Jews the group referred to as Falash Mura — while authorizing humanitarian aid to those Ethiopians.

The plight of the Falash Mura — and as many as 4,000 other Ethiopians from the Kwara region whose Jewishness is not in dispute — surfaced as a major issue this week.

On Tuesday, Ethiopian immigrants staged a massive protest outside the Jerusalem convention center where the 5,000 delegates were meeting at the General Assembly of the UJA Federations of North America.

Estimates of the demonstrators — many of whom traveled hours by bus to attend the rally — ranged from several hundred to 3,000.

Scores of uniformed police officers sealed off the main entrance of the convention center as the demonstrators — many wearing kippot — prayed, chanted slogans and waved banners emblazoned, in Hebrew or English, with messages such as, "All Jewish Life Is Priceless" or "Reverse Discriminatory Policies."

The largest banner, stretching several feet long, was spray-painted in black: "In Ethiopia, Jewish children are starving and dying today."

Other signs of protest were buttons worn by members of Boston's Combined Jewish Philanthropies, which read, "I Believe in the Ethiopian Dream."

Disagreements over the Israeli government's Ethiopian immigration policy also erupted at an afternoon session of the General Assembly on Tuesday. The session was supposed to be devoted to the subject of the absorption of Ethiopian immigrants already in Israel — some of whom arrived nearly 20 years ago.

Knesset member Adisu Massala, himself an Ethiopian immigrant, was addressing a packed room of some 100 convention delegates when Ethiopian activist Yafete Alemu screamed out that Massala's description of the Falash Mura as Christian converts was "not true."

"The truth is … in front of your eyes!" exclaimed Alemu, who is a member of the activist group South Wing to Zion.

The session's moderator restored calm by promising to set aside time at the end of the program for a full discussion of the issue. He lived up to his promise, and an intense volley of conflicting positions ensued.

At issue is whether the Falash Mura deserve to immigrate to Israel. The Israeli government's position is that Falash Mura are the descendants of Jewish converts to Christianity.

Some 2,800 Falash Mura were brought to Israel following Operation Solomon in 1991 under a special application of immigration law. But according to the Israeli government, neither they nor their relatives are covered by the Law of Return, which requires the immigrant to have at least one Jewish grandparent.

Last summer, Israel called on the American Jewish Joint Distribution Committee and the North American Conference on Ethiopian Jewry, an advocacy group, to close down their Ethiopian operations. Israel contended that all eligible immigrants had been evacuated.

Since that time, thousands of additional refugees have arrived at the Jewish organizational compounds in Addis Ababa and Gondar, in the hopes of making aliyah. As a result, the North American Conference continued to provide food and religious services. Many Falash Mura are now practicing Judaism.

Israel's government claims that the North American Conference reneged on its agreement to close shop and has rained criticism on the organization in government meetings this week regarding the situation in Ethiopia.

Barbara Ribakove Gordon, the North American Conference's director, said she plans to continue serving the needs of the estimated 15,000 refugees in Addis Ababa and Gondar until their immigration applications are processed.

In one recent meeting, Israeli government ministers announced that they would sanction Jewish groups, including the Jewish Agency for Israel, the JDC and the UJA Federations of North America, to fund humanitarian aid for the refugees. But, the Israeli officials maintained, the work on the ground must be handled by a third party, one with no connection to the Israel's government.

Israel also plans to streamline its procedures for processing the immigration of Jews remaining in the Kwara and Gondar regions, who have been waiting to be cleared for aliyah for several years.

Much of the background about the situation in Ethiopia was explained in a pamphlet that the UJA Federations of North America distributed to all General Assembly delegates at registration, in anticipation of Tuesday's massive demonstration.

Ethiopian activist groups, in turn, distributed their own literature, including reports of the refugees' abysmal living conditions and appeals for donations. 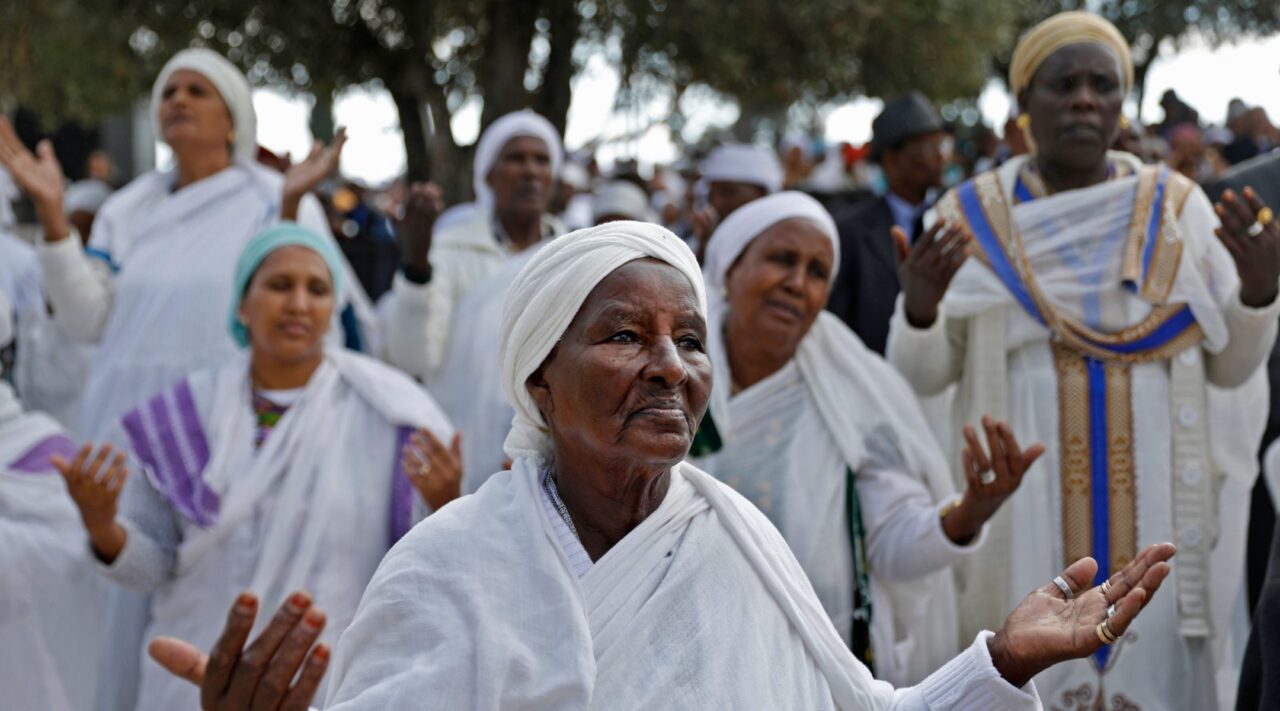