Rabbi Chanan Feld is buried on the Mount of Olives

In a torrential downpour, and with hundreds of mourners looking on, Rabbi Chanan Feld was buried Nov. 2 on Jerusalem’s Mount of Olives. It’s a prestigious final resting place, afforded only to the most righteous.

The beloved Berkeley rabbi, teacher and mohel died Oct. 28 after a yearlong battle with cancer. He was 53.

“He was just pure goodness,” remembered Feld’s friend, Rabbi Yehuda Ferris of Chabad of Berkeley. “He touched more people in the community than anyone else.”

That claim can be quantified, in part, by factoring in the estimated 7,000 brises Feld performed over his 20-year career as a mohel. He served the entire Bay Area as well as the Pacific Northwest, sometimes flying as far as Oregon or Hawaii to perform the mitzvah.

“Some days he would be in Sacramento, then down in San Jose on the same day,” Ferris added. “He put so many miles on his beat-up car. For some he was their only exposure to an Orthodox Jew.”

Feld’s son, Rabbi Dovid Feld, grew up admiring his father’s dedication and gentle way with people, especially when on the job.

“As a kid, it was a privilege to go with my father to a bris,” Dovid recalled. “It was pretty cool to have our father reach out to so many. He didn’t push things on people. That was his personality.”

Serving as a mohel was one part of his rabbinate. Torah study was the other. Along with Noach and Tamara Bittelman, Feld and his wife, Jody, co-founded Berkeley’s Beit Midrash Ohr HaChaim 10 years ago. It became a popular East Bay center of Torah study.

Jody Feld remembers her husband as a man filled with love for all people, and she says they felt that acceptance.

“He had a colorful life before he became [religious],” she said. “He was true to who he was, so he had no trouble interacting with anyone across the spectrum. He blew people away. It didn’t matter if they were religious or not.”

Chanan Feld, born Cary Feld, grew up on the north side of Chicago, and from an early age exhibited athletic prowess. By sixth grade, he had discovered soccer. He excelled, and later won a scholarship to Indiana University, where as goalie he helped lead his team to the 1976 NCAA final (in a bit of foreshadowing, Indiana lost to the University of San Francisco).

Business degree in hand, Feld headed west to California, where he got a job in the accounting department of Sierra Designs. “He said ‘I’m going to California to climb mountains and ski,’ ” remembered his father, Alvin Feld.

Though brought up in a minimally religious home, Feld’s destiny changed when he went home to Chicago one Thanksgiving when he was around 25 years old to attend the funeral of his maternal grandfather, an observant Jew.

“When Cary was growing up, he always went to synagogue with [his grandfather] on the Sabbath and holidays,” added Alvin Feld. “That’s where the seeds of deep religion were born. He said to us, ‘I will honor my grandfather,’ and that was the beginning.”

Back in the Bay Area, he shopped around for a spiritual home and one day showed up at the Berkeley Chabad House.

Ferris didn’t know then just how live. In time, Feld adopted the look and lifestyle of the Lubavitcher movement, and undertook intensive Torah study.

Around that time, Feld attended a Chabad-sponsored Lag B’Omer picnic, where he met his bride-to-be. But the budding romance would become a long-distance relationship for a while when Feld left for yeshiva, first in Los Angeles and later in Israel, where he was ordained.

“I was so in awe of him that he would go and do it,” Jody recalled. “For two years, we were writing letters. It became clear to each of us this was going in a certain direction.”

The couple married in June 1984. They had three children together. “His family was everything to him,” Jody added. “His children were his whole life, in addition to everything else.”

“Everything else” included his work as the Bay Area’s leading mohel, a profession he took on in 1987.

“You could tell he had a passion for helping people and entering the covenant,” remembered Ferris. “He always made the distinction between circumcision as a surgical procedure, and the bris — coming into a covenant with God.”

As a teacher, Feld opened up Torah to his students. That passion for teaching never flagged, even through the last 10 months battling cancer. He wrote drashes, poems and reflections, which quickly went viral through global e-mail chains.

Despite increasing health difficulties, which required hospital stays and painful procedures, Feld never stopped exhorting others to study, learn and do mitzvahs.

“We were always pushing visitors away, but he wanted tons of visitors,” said his son, Dovid, who added that the flood of e-mails wishing his father well “provided a lot of support for him. It kept him going over these difficult months. He didn’t have time because of his health to study as much, but whatever time he had, he was learning and studying.” 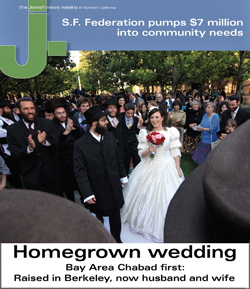