A kosher Metropolis: After buying bakery, owner gives it the Jewish touch

Ever since Robin Alexander became the head baker at Metropolis Bakery in 2003, he wanted to reinvent it as a kosher bakery.

But he had to wait nearly seven years to make it happen.

Robin Alexander looks over a tray of “water” challahs, made without eggs.    photos/stacey palevsky

In December, after Alexander bought the 20-year-old Berkeley bakery from its previous owner, one of the first things he did was contact the Vaad HaKashrus of Northern California and move forward on making the establishment kosher.

“As soon as I got the chance, I jumped all over it,” Alexander said.

He figured it would boost business, but his motivations weren’t entirely professional.

“I grew up in a Jewish family, and I have a great respect for the Jewish community,” said Alexander, 47. “And I knew it’d be awesome if it had this kind of bread.”

“This kind of bread” is artisan bread made the old-fashioned way — by hand. (The dough is mixed and kneaded by industrial mixers, but is shaped by bakery workers.)

Metropolis is a 6,000-square-foot wholesale bakery in the Berkeley flats that operates “24/7, 363 days a year,” Alexander said, and produces about 10,000 loaves and rolls daily. The bakery specializes in traditional regional Italian breads.

Sourdough loaves are ready for the oven.

Like Grace Baking Company and Semifreddi’s, Metropolis opened in the 1980s on the heels of Berkeley’s Acme Bread Company, which Steven Sullivan started in 1983. Sullivan is credited with bringing the artisan bread movement to the Bay Area.

Alexander calls the bakeries “the fab four” — and his is the last of the scratch bakers to still make all of its bread by hand.

First, all the ingredients used in Metropolis breads needed to be verified as kosher, and swapped out if they weren’t. This was a lengthy process because Metropolis uses a number of different flours for about a dozen types of dough — including a New York rye and a traditional egg and honey challah (depending on demand, the bakery may soon offer a “water challah” made without eggs).

Next, because Alexander wanted the bread to have kosher and parve labels, he had to modify some of the existing recipes that previously had used powdered milk.

Step three: cleaning. “That was a nightmare,” Alexander recalled.

He and his team of bakers scraped and chiseled every bit of carbonization off the metal shelves used to hold trays of bread. Then the rabbis torched them.

Alexander sent out all of the baking trays to be re-glazed. He and his team washed all the convection ovens and hearths, then torched those too.

At various points in the process, “the rabbis were davening,” Alexander said. “I put tefillin on and davened too.”

To maintain Metropolis’ kosher certification, Alexander — its sole Jewish baker — is the only one allowed to turn on the ovens. Eventually he’ll install a timer that prevents the temperature from dropping below 170 degrees, so that other people can increase temperature (but not have to turn the ovens on).

Going kosher “has been great for the [bakers] too,” added Alexander. “They’re developing an appreciation for kashrut.”

Alexander was 7 years old and living in a foster home in San Francisco when he was adopted by Fran and Ernie Alexander of Berkeley. Ernie, who died in 2007, was a pillar of Jewish education in the East Bay, helping start Midrasha and serving on the board of the Center for Jewish Living and Learning.

Alexander grew up attending Berkeley congregations Beth El and Beth Israel, and had his bar mitzvah at the former.

He worked at Chez Panisse busing tables and as a production manager at Semifreddi’s while in college studying geology. For several years he worked for the U.S. Geological Survey and for CalTrans. But “I didn’t picture myself at a lab under fluorescent lights,” Alexander said. “I just didn’t dig it.”

In the late ’80s, as Acme Bread began to take off, he accepted a job as a janitor. One day, when owner Sullivan asked if he’d like to learn how to mix dough, Alexander jumped at the chance.

“My baking experience has been totally visceral,” he said of his lack of formal training.

Alexander then traveled to the East Coast and to Europe, learning how to make bread, puff pastries and viennoiserie, such as croissants and brioches.

But bread he loved the most. So he moved to New York and worked at three bread bakeries simultaneously: one during the workday, one in the evenings until 3 a.m. and one on the weekends.

He returned to Berkeley in 1996 and worked again at Acme, then at Bay Breads. In 2003, he joined the staff at Metropolis.

Alexander’s love of bread is evident. As he walks through his bakery, he shows off the fine-grain flour, pushes his arms into the bin of sourdough starter in the industrial refrigerator and shapes the proofed dough while joking in Spanish with the other bakers. Specks of flour dot his upper lip.

“I’m proud to provide this bread for the Jewish community,” he said.

Metropolis Baking Company breads are available at markets across the Bay Area. For a list, check www.metropolisbaking.com or call (510) 848-7263. 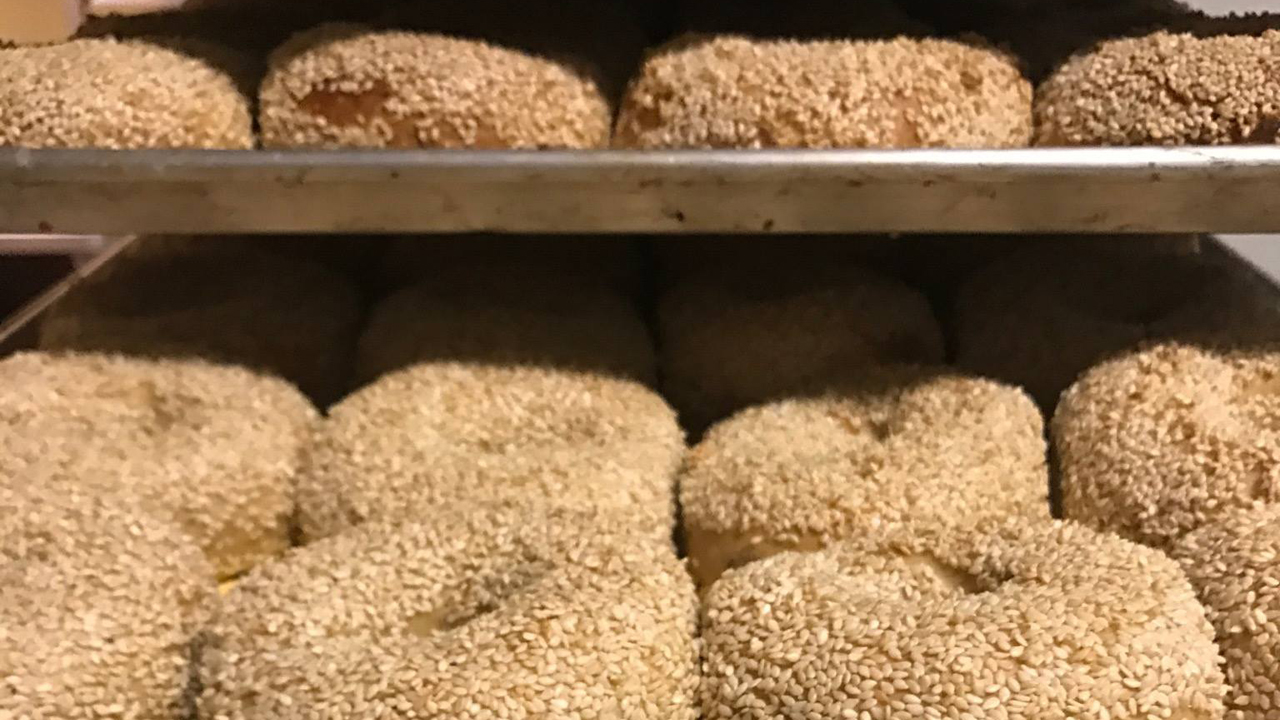