Jewish students at Berkeley Law tell their side of the story

Jewish student leaders at UC Berkeley spoke out publicly on Thursday night in the wake of a media firestorm stemming from a decision by nine law school affinity groups to ban Zionist speakers.

Jewish students said the bans, which were exposed by J. in August, subtly impacted them in the intervening weeks and months as they planned their response, but a provocative op-ed late last month exploded the issue into the national and Israeli press, prompting a flood of attention on the prestigious law school. The Jewish Journal headline was “Berkeley develops Jewish-free zones.”

A rebuttal in J., from Berkeley professors Ethan Katz and Ron Hassner, argued the university in fact has many “Jewish-filled zones,” robust Israel scholarship and a thriving Jewish community, calling the anti-Zionist bylaws “an outrage.”

In endorsing the bylaws, which were introduced by Berkeley Law Students for Justice in Palestine, the affinity groups — including Women of Berkeley Law and the Queer Caucus — pledged to support BDS and never invite speakers who “expressed and continued to hold” Zionist views.

At Thursday’s forum, organized by the S.F.-based Jewish Community Relations Council, Jewish student leaders shared what, in their view, is really going on.

Speakers included Noah Cohen and Charlotte Aaron, law students and board members of the Jewish Student Association (JSA), and Shay Cohen, an undergraduate student senator who is heavily involved with Hillel and Chabad on campus.

Ethan Katz, a professor of modern European and Jewish history at Berkeley commends "bravery" of Jewish students at the law school for pushing back against anti-Zionism and "reclaiming" Zionism which he has described as the national liberation movement of the Jewish people. pic.twitter.com/v81zbJQms9

“We need to make sure that we build capacity to be able to support these students and faculty” at Cal, Gregory said.

The Berkeley students shared deep concern about the pressure the bylaws were placing on their fellow Jewish students. Law School Dean Erwin Chemerinsky, a progressive Zionist himself, earlier criticized the bylaws, even as he has defended the free speech rights of all students. Chancellor Carol Christ called the developments “regrettable” in a letter Thursday and said she “strongly affirm[s] [her] firm stance against boycotts and antisemitism.” The chancellor added, “there is no legal basis for sanctioning, defunding, or deregistering” the student organizations “based on their constitutionally protected freedom of expression.”

Aaron, who handles communications for the JSA, said while the troubling aspects of the bylaw were not immediately clear to many students, they were painfully clear to members of the JSA, in effect demanding that Jewish students disavow an important part of their identity.

“They make Jewish students choose to either be OK denouncing an important part of who they are to be part of an organization, or to quietly exclude themselves,” she said.

Many of the adopters, she said, seemed to do so without much knowledge of the Israeli-Palestinian conflict or the effects the provision would have on Jewish students (even as Law Students for Justice in Palestine was likely aware of its impact). Some simply approved it on the advice of friends with the vague understanding that it was a matter of social justice.

“I was under the impression that people understood this was a complicated issue,” Aaron said. “Apparently that was not the case.”

She called on the administration to do more to encourage students to hear from the other side of the Israeli-Palestinian debate, adding that it’s often difficult for Jewish students to speak out in support of Israel because of widespread animosity toward Zionism.

The “last thing” many Jewish students want is “out themselves” as Zionists, she said.

They make Jewish students choose to either be OK denouncing an important part of who they are to be part of an organization, or to quietly exclude themselves

Noah Cohen, a second-year law student, said he and other Jewish student leaders were conflicted about media coverage surrounding the incident. The bylaws passed relatively quietly over the summer, which was “kind of nice for us,” he said. “It allowed us to think about how we wanted to respond.

“At the same time, it was kind of like, maybe more people should be aware of this,” he added.

J.’s initial report on the incident, published Aug. 26, attracted a relatively large audience, but the controversial op-ed a month later, which reframed the issue using language of the Third Reich, launched the issue definitively into the national spotlight. Its author, Ken Marcus, an attorney, was invited to appear on talk shows, including “Fox and Friends,” and his article was shared on Twitter by Barbra Streisand.

Cohen called for the law school to wield its administrative authority differently when it comes to student groups. As members of the JSA, for example, he and other board members had to affirm they had undergone “sensitivity training,” something required of all official student organizations. Such trainings could be used to educate students on a host of issues.

“There’s a lot of, on some level, bureaucracy you need to go through to be a registered organization at a public university,” he said. “There’s a lot of opportunity to change what people are learning.”

The university has made efforts in recent years to educate students on antisemitism, including via its Antisemitism Education Initiative, which produced a short explainer video on the history of anti-Jewish hate. AEI has tried to make its video required viewing for new student orientation.

Still, anti-Zionism remains a powerful ideology at Berkeley, as it does on college campuses across the country.

Aaron described a concerning experience after the bylaws passed. Student group leaders, many of whom were novices to the history and politics of the region, had to attend a training seminar called “Palestine 101” as a stipulation of the bylaw they had just approved.

Aaron beseeched the university administration for "institutional support" to encourage students to attend a forum sharing views from the other side of the issue. Many students knew next to nothing about the conflict, she said. pic.twitter.com/cqdNWnVKjM

The training, which Aaron attended, painted an extremely one-sided view, she said.

“The takeaway from that event was if you are a Zionist, in any way, shape or form, then you are also a settler colonialist, and you support police brutality, and all sorts of really terrible things,” she said.

Afterward a student told her that, if given the opportunity, they would be unlikely to attend a similar training presenting an opposing view. Such an event would be “harmful” to her friends, particularly to people of color and to Palestinians, considering what they had just learned about Zionists.

“It puts Jewish students in a position of walking into a room full of people, who they know have now heard, and adopted, these opinions,” Aaron said. “And that feels really, really bad.”

Shay Cohen, the undergraduate student senator, painted a dire portrait for Jewish students on campus, saying that whether one uses the word “Zionists” or “Jews” in an exclusionary bylaw made little difference to her.

“This is so much larger than we all think,” she said, noting that she was recently “slandered” for supporting Israel at a student government meeting, something that has happened before at Berkeley’s student senate.

She beseeched the Jewish community for help, though she said the problem was much greater than any one organization’s capacity to address it.

As a Zionist, she said, “there is a target on my back.” 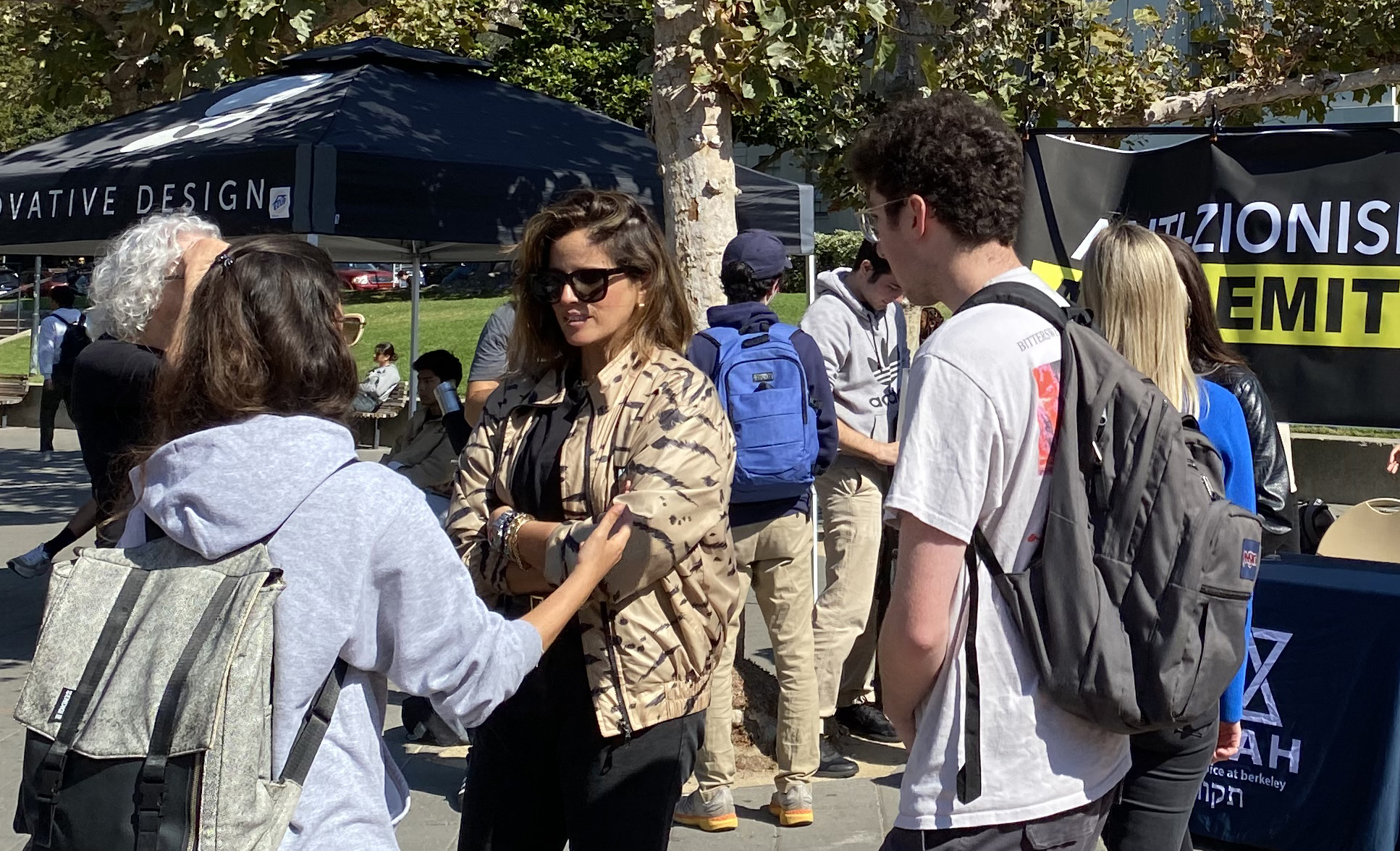