LONG ISLAND, N.Y. — A Great Neck rabbi who recently blessed the union of his assistant rabbi and her lover is now reconsidering his stance against intermarriage.

Rabbi Jerome Davidson of the Reform Temple Beth El called his assistant, Rabbi Karen Bender, and her lover to the Torah for a blessing the week before their California wedding.

Since the occasion, the liberal Davidson has been criticized — not for supporting a lesbian union — but for refusing to call intermarried couples to the bimah (synagogue platform) for an aufruf, or prenuptial celebration.

Yet he insisted he will not wed interfaith couples. Gay and interfaith marriages "are two different situations. One deals with two Jews committed to a Jewish home, even if their sexual orientation is homosexual. There's no loss of Jewish continuity there," he said.

"The other deals with a potential great loss in Jewish continuity because statisticians tell us when there's intermarriage and no conversion, there is a 75 to 90 percent chance the children will be raised as non-Jews."

Nevertheless, Davidson said he has been reconsidering his approach to intermarrying couples who want to be part of the congregation. He is planning to propose something akin to a public acknowledgment that such a couple would commit to link themselves to the Jewish community.

"I am hoping a step in that direction might be taken through a premarriage welcome. I don't know exactly what, but I feel keenly that we have to acknowledge them," the rabbi said.

Nevertheless, his approach to the same-sex union of Jews is unwavering. "Judaism sanctions the desire to live together with a life partner and to share a lifelong commitment," he said. "Of course, the Bible's view of homosexuality is an altogether different one."

Reform rabbis like himself "are looking at the spirit of Judaism," Davidson said. "As Isaiah the prophet said, `My house shall be a house of prayer for all people.'"

Davidson's support for commitment-minded Jews became a public issue in June when he performed the aufruf for the lesbian couple. Like the heterosexual couple honored before them, Bender and her partner bowed their heads under the stars with members of the congregation gathered in the outdoor sanctuary.

"I asked God to bless them with fidelity to the highest Jewish values of home and family and long years of health and joy," Davidson said.

While the service proceeded as usual, for some temple members the event was not simply another simcha (joyous occasion) in the congregation's nearly 50-year history.

Bender was hired, along with another associate rabbi, Reni Altman, last year. The reaction to the union was "mixed," said temple executive vice president Shelly Limmer, who attended the wedding a week later with her husband, Steve.

"Although some people told us they were shocked and surprised, and some were dismayed and angry that it happened…it was a small group," and most welcomed the pair, said Limmer, who was on the search committee that hired Bender.

The debate over the ceremony has echoed through Great Neck, which boasts eight sizable congregations ranging from Reform to Lubavitch.

Rabbi Yaacov Lerner of Young Israel of Great Neck, vacationing in Israel, said he "was not pleased with the situation." Homosexuality "should not be legitimized at any point," he said.

"I don't get" why critics are comparing Davidson's stands on gay unions and intermarriage, he said. "What does a marriage of two Jews have to do with intermarriage?"

"Gay people can praise God as much as straight people, in my opinion," Geller added. "If a rabbi wants to invite gay people to the bimah for an aufruf…I don't have a problem with it."

Rabbi Yossie Geisinsky of Chabad agrees that gays should be welcome in synagogue — but not publicly identified. "Traditional Judaism never rejects any Jew, whatever conduct they may do in private," he said. 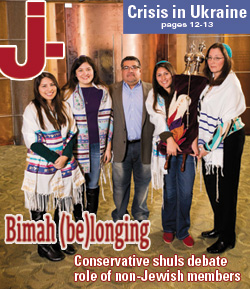