Ask 32-year-old Jason Gilbert what he likes to do on a Friday night, and he'll rattle off a variety of answers: See a play, head to a bar or go dancing. But on the second Friday night of the month, none of the usual options vie for his time.

On that night, there's one place you'll find him: San Francisco's Congregation Emanu-El, along with 1,000 other people.

Yes, 1,000 attended a recent Late Shabbat at the Reform synagogue. The ever-growing numbers have caused the congregation to start a second Late Shabbat, on the fourth Friday of the month, appropriately called Late Shabbat 2.

"The thing about services here," said Gilbert, a San Francisco resident, "is that it's on everyone's calendar. It's the second Friday — I'm going to services."

One need only look around Emanu-El's social hall, jam-packed with well-dressed young adults, to see that Gilbert is not alone in his thinking. Jewish population surveys show that young adults — loosely defined as somewhere between 20 and 40 years old — account for the largest number of unaffiliated Jews.

In the Bay Area, where an estimated 80 percent of Jews are unaffiliated, bringing in those numbers is no easy feat. New York City's Congregation B'nai Jeshurun draws an average of about 1,000 young adults to its Friday night services each week, and the Conservative Sinai Temple in Los Angeles gets up to 2,000 at its monthly "Friday Night Live" service. But that's New York and Los Angeles, both of which have significantly larger Jewish populations than San Francisco.

So what drives Emanu-El's success?

Rabbi Sydney Mintz, who leads the 7:30 p.m. service, has an idea. "We are offering much of what that age group is seeking in a very open atmosphere, so that people feel welcome," she said. "We offer spirituality, companionship and a place where they can celebrate Shabbat with people their own age."

Those who attend give many reasons for coming, and a big one seems to be Mintz herself.

Dana Ritchie, 33, who drives up regularly from San Jose, said Mintz strikes the right balance, being both thoughtful and serious as well as funny and light. "She creates a friendly atmosphere."

"I love the rabbi," agreed 38-year-old Steve Rossen of Berkeley, who attends every month. "She is sharp, and she makes the service both spiritual and meaningful."

At 36, Mintz is Emanu-El's youngest rabbi. "In five years, I'll have to give up the gig," she cracked, adding that young adults see her as a kindred spirit.

Mintz does not shy away from topics she considers controversial. At one service, for instance, she opened the floor to take comments and questions on the current situation in Israel. In the past, she's also addressed intermarriage, and the difficulties she and her partner faced as a lesbian couple adopting a child.

Mintz does not lead the service alone; she is joined by guitarist and vocalist Marsha Attie and by percussionist Eric Schoen, who give the service a summer-camp feel.

For Rossen, Attie's singing provides a chance to "connect in a way other than words."

But clearly there are other reasons for the big turnout. Just as much as the service itself, the shmoozing afterward is also a big draw.

"I am amazed at the diversity of the people coming," said Mintz. "There are people who are interdating, and people coming from Hillel, in college or grad school. There is a group from the Young Adults Division of the Jewish Community Federation, and a group of gays and lesbians and Israelis. It's not just one group, but a cross-section. We've given them a place."

The service is also extremely popular among the young adults who work for Jewish organizations.

"When I walk through the crowd there, it's hi hi hi hi," said Saar Pelles, 29, the director of marketing and public relations for the Consul General of Israel. Pelles, of San Francisco, said when he first moved to the Bay Area, he tried out a few synagogues, but the Late Shabbat at Emanu-El was where he felt most welcome.

"I know a lot of people here," said Morgan Cohen, 28, of Mountain View. "Some I see during the month, but some I see only here, and there's a real sense of community."

"With some people, if you don't come here, you don't see them," said Judith Gottesman, 33, of Berkeley. "This is the only Jewish place they come."

Judy Malkin, 34, of San Rafael, attended the service for the first time recently and said she would definitely be back. "When you go somewhere new and you're the youngest person, it's a turnoff," she said.

But another female attendee, who chose to remain anonymous, came for the first time recently, and definitely won't return.

"I felt uncomfortable from the minute I arrived," the 26-year-old said. "I constantly felt men were looking me up and down, trying to decide whether I was good enough to take home to mom."

And one gay attendee who did not want to be named said though he enjoyed the service, in terms of meeting people, it was definitely more of a straight scene.

Emanu-El's first service targeted specifically toward young adults took place in October 1999. Larissa Siegel, director of young adult programs at Emanu-El, had lived in both Chicago and Washington, D.C., two communities where she felt the young adult community was well served. When the Bay Area native moved back to San Francisco though, she felt there was a lack of programs for her age group.

Outside the Conservative Congregation Beth Sholom, which has drawn anywhere from 50 to several hundred young adults to its Shabbat services and dinner on the third Friday of the month for six years, the options — especially for Reform Jews — were limited.

For that first service, Siegel sent a postcard to all Emanu-El members born after 1961. She also invited her friends. Mintz told her friends, and the synagogue advertised the service in the San Francisco Bay Guardian and S.F. Weekly.

"We look to reach them in places they read things so we went to the alternative media," said Gary Cohn, executive director of Emanu-El, adding that they are now discussing the radio market. Pointing out that a significant proportion of Bay Area young adults are transient, Cohn said, "If someone new comes to town and doesn't know about it, we want to reach those people."

Marketing techniques aside, about 35 people showed up to that first service in the synagogue's smaller Martin Meyer sanctuary — many of them friends of Siegel and Mintz.

"We were happy with that," said Siegel. "They were 35 quality people who were excited, enthusiastic and wanted to be there."

The feedback was positive, news of the service traveled by word of mouth, and by the next month, the number had doubled. A few months later, it increased to 100. Just over a year ago, the service outgrew its original home and moved into the main sanctuary.

But at the same time, the mingling afterward does have a singles feel. Along with the cheese and crackers, fruit and other munchies offered at the oneg, He'Brew beer is served. While there used to be bottles, the large numbers of attendees have made the service into a two-keg affair.

"I knew my friends and contemporaries drank more beer than wine in socializing," said Siegel, who takes credit for offering the post-service suds, and said she received absolutely no opposition from any of the administration in doing so. "The point of the beer is not to make it into a drinking activity but to enhance it and make it enticing for people to stay and socialize."

Late Shabbat 2, which began last month, has a different emphasis. There is no socializing afterward, and while Mintz and Attie lead the service, Emanu-El's other clergy rotate leading an interactive portion, with those in attendance breaking into discussion groups, giving it a heavier emphasis on learning.

Late Shabbat also seems to be attracting people to other young adult programs at the synagogue. Siegel actually was hired to work in the membership department, but began turning her efforts toward young adults' programming when it became apparent it was needed.

"To make them members is not the point," said Siegel, "we don't have any specific membership goal."

At the same time, she said, while the young adult community is not the largest, it is the fastest-growing segment.

Cohn estimates about 30 percent of those who attend the service are members. Congregation leaders believe increased membership among young adults will be a natural consequence, said Siegel.

"We open our doors and make people feel welcome," she said, "so at the time they decide they want to join a temple, they will turn to the one that was welcoming to them, where they felt a spiritual connection, where they feel their community is."

The synagogue believes in that mission so much that Mintz has full support to devote much of her time to the young adults community — members or not.

Mintz says the time spent with young adults has changed the nature of her job, noting that she's now asked to do many more weddings than before. She also opens her office doors or speaks by phone to perhaps 10 people a week; time permitting, one doesn't have to be a member of the synagogue to request a meeting.

"The issues range from how to break it to their parents that they're joining a synagogue, to what do I think about interdating, or in a trend of today, a lot have settled here and have lost their jobs."

It seems the numbers will only keep growing, and Mintz and her colleagues at Emanu-El couldn't be happier. After the service, her work finished for the evening, the rabbi stays and shmoozes along with everyone else.

"My kids are at home, and asleep already, so I stay," she said. "I get a spiritual high from being with that group of people. This is one of my most meaningful parts of my rabbinate." 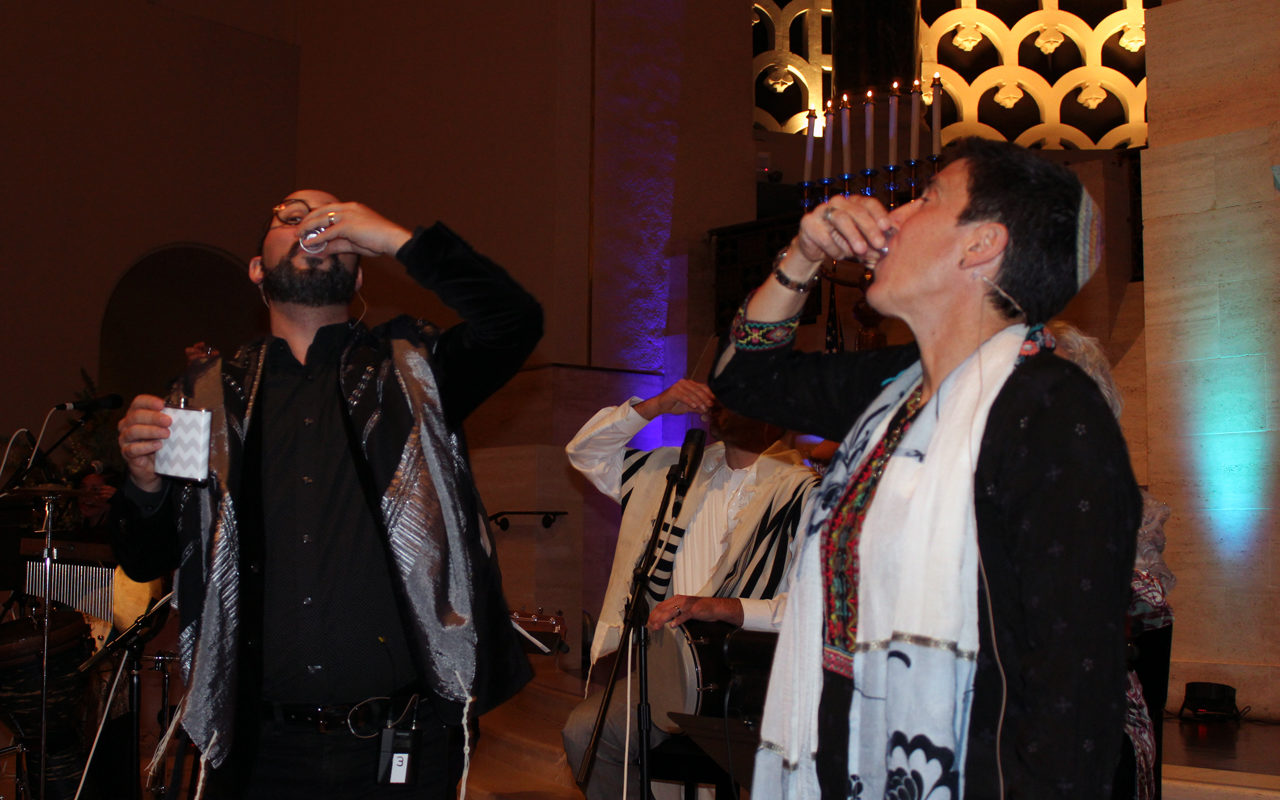