Not that long ago, I got an e-mail from a young Jewish man who wrote that a young Jewish woman friend of his told him: “There are no Jews in rock.” He said she wasn’t very proud of being Jewish — it wasn’t part of her “cool” self-image. Well, he brought her to the Web site I edit and her mouth fell open as name after name she recognized was in our rock category.

No, the rock and roll “lifestyle” is not all that compatible with being an observant Jew. Only a minority of Jews in rock maintain some degree of Jewish practice. But they are rarely reluctant to let it be known they are Jewish. Moreover, there isn’t an area of rock in which there isn’t a “cool” Jewish presence. Here are some of the Jews about to play San Francisco.

Adam Duritz, the lead singer and songwriter for the popular band Counting Crows is playing at the Fox Warfield from Monday to Friday, Dec. 8 to 12. His music is fairly reminiscent of the rock of the ’60s — intelligent lyrics and a catchy, mainstream rock beat. He is promoting his latest CD. On the same bill are The Wallflowers, a popular four-man band, of which three are Jewish: frontman Jakob Dylan, keyboardist Rami Jaffee and bass player Greg Richling.

Duritz, who mostly grew up in the Bay Area, celebrated a bar mitzvah. Dylan became a bar mitzvah in Los Angeles, and his younger brother, film director Jesse Dylan, celebrated his bar mitzvah in front of the Western Wall in Jerusalem. Jaffee grew up in an observant home in Southern California. His father, who is of Ashkenazi ancestry, and his mother, who is of Moroccan Sephardi decent, met at a wedding in Israel. He is known by many of his friends as “Rabbi Rami,” and he makes time, even on the road, to light Shabbat candles. He and his wife often celebrate Shabbat with Richling and his wife.

Also coming soon is Steve Berlin, the saxophonist with the great Chicano/rock/Tex-Mex music band Los Lobos. Berlin and Los Lobos appear at The Fillmore Friday and Saturday, Dec. 5 and 6. Most people know this band from their hit remake of Richie Valens’ “La Bamba,” which was featured in the popular 1987 film of the same name. However, the band has existed for 30 years — four Latino guys from East L.A. and a Jewish guy from Philly. Berlin joined the band in 1982 and has been an essential ingredient to their success. Berlin is also active as a producer of many bands, including Latin/rock music groups like Ozomatli.

Ozomatli is playing the Fillmore on Monday, Dec. 15. This 11-man, Grammy-winning band describes itself as a “polyglot Black-Chicano-Cuban-Japanese-Jewish-Filipino crew.” It combines Afro-Latin beats, hip-hop, rock, salsa, meringue and samba, mostly sung in Spanish. The Jewish member of the crew is Wil-dog Albers, 23, the bass player and vocalist. Albers’ parents were members of a leftist sect that has often been called “cult-like,” and I suspect he had little, if any, religious background.

Last, but not least is Bela Fleck and the Flecktones, appearing Friday, Nov. 28 at the Fillmore. Fleck has virtually reinvented the banjo, the way Jimi Hendrix re-invented the electric guitar. He has collaborated with musicians in every genre, including playing Jewish music with Andy Statman and David Grisman (“Heaven and Earth: Music of the Jewish Mystics”). No other musician besides Fleck has won Grammys in the jazz and country categories.

So, even if you’re not a rock fan, name drop a few of these “cool Jews” at your holiday parties and see the reaction. 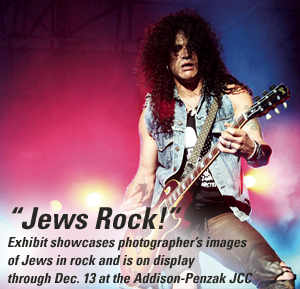