Bay Area rabbi gets a proposal to remember

The first fortune cookie appeared in a gift bag on her dining room table on Valentine’s Day. “He likes to flirt, but toward you, his intentions are honorable,” it said.

The second cookie was left two weeks later outside her dance class at the YMCA. It said: “Your love life will be happy and harmonious.”

After unsuccessfully trying to plant another one in her office or car, Roger Studley gave Chai Levy the third cookie the night before she left for Israel. The fortune said: “Your dearest wish will come true.”

Studley, 39, is assistant director for admissions and research at the University of California. Levy, 34, is assistant rabbi at Congregation Kol Shofar in Tiburon. While both of them knew a marriage proposal was imminent, Levy had no clue what was up her boyfriend’s sleeve. And Studley was going so far as to stash a new suitcase and his new passport at work, lest she see the evidence lying around his apartment.

Studley was raised in Fort Lauderdale, Fla., Levy in Richmond, Va. They met during Chanukah 2004, at a “late Shabbat,” the young adult service at San Francisco’s Congregation Emanu-El, which begs the question: What’s a Conservative rabbi doing at a Reform service? Levy had the rare Shabbat off, and decided to go with a friend.

“It’s significant that it was Chanukah,” said Levy. “It’s the time of miracles and light.”

Studley cheekily says on his blog, “Yes, I hit on a Conservative rabbi at a Reform shul by a beer keg.”

At the end of the evening, Studley asked Levy on a date, which took place two weeks later.

So by Chanukah the next year, the topic of marriage was beginning to come up, not only from Levy, but from her mother.

“She was like a mama bear protecting her cub,” is how Levy describes it.

Levy was going to lead a trip to Israel for her congregation and Berkeley’s Netivot Shalom in March. Studley had never been to Israel, and talked to Levy about joining the trip. But she was a rabbi. She didn’t feel it was appropriate to bring her boyfriend — who was not her fiancé — along on a congregational trip.

So Studley started planning. He bought a new suitcase and hiking boots. He applied for a passport. He bought a ticket to Israel. And, most importantly, he bought a diamond ring.

He did some snooping on her computer when she wasn’t around to get the trip itinerary. And while he was doing this, he told only one friend, in San Diego.

Keeping the secret was “excruciating,” said Studley. “From the very beginning, I made a decision that I couldn’t tell anyone who had any possibility of knowing Chai. I was afraid they might slip, but I also didn’t want to burden anyone with having to keep the secret.”

The night before Levy left, Studley gave her the third fortune cookie. In return, she gave him a green T-shirt she had bought from a female rabbinical student at the Jewish Theological Seminary; it said; “Real Men Marry Rabbis.” She had hoped to give it to him when he actually proposed, but the moment seemed right, so she brought it out then.

Levy left the next day. On the way, she had several missed connections, and her bags did not arrive with her. Studley left a few days later. His getting sick on the plane and almost leaving his passport, money and diamond ring in a dressing room during his London layover could have ruined his plans. But he and the fourth fortune cookie made it to Israel intact.

Speaking of that fortune cookie, Studley had gone through extraordinary lengths to make sure it arrived in one piece. He wrapped it in bubble wrap, enclosed in a Styrofoam container, in his carry-on. Going through security, it looked suspicious. He had to remove it from his bag for the security guards, who carefully examined it.

Studley, meanwhile, had good friends in Jerusalem; Bekah, a woman in her first year of rabbinical school at Hebrew Union College, and her husband, Sean. Sean converted to Judaism years ago, and had never had a bar mitzvah. It just so happened that he was being called to the Torah for the first time, and Studley timed his trip so that he could attend. Studley was honored by being given an aliyah at his friend’s bar mitzvah, his first full day in Israel.

Studley knew that Levy was staying at the Dan Panorama Hotel, just one block from Bekah and Sean’s Jerusalem apartment. For his first two days in Israel Studley carried the ring in his pocket, afraid he might bump into her on the street.

He had shared Levy’s itinerary with his friends before coming, and asked their advice as to where he should pop the question. They convinced him that Masada, with its sweeping views and its symbolic history, would be the perfect setting.

At first, he was skeptical. “That didn’t sound quite right, it’s not too happy how that story ended,” Studley recalled.

But they managed to convince him that indeed, it was the perfect place.

So, on day number two while the group toured Yad Vashem — Israel’s Holocaust memorial museum, a place where Studley knew he definitely did not want to propose — Studley headed south. He spent the night at a youth hostel at the base of Masada, and in the morning, took the first cable car up the mountain, to be sure to make it up there before his future bride.

Meanwhile, Levy had come down with horrible stomach pains. So horrible, that a doctor visited her in her hotel room. And her bags still hadn’t arrived. It was day six of the trip, and she was still wearing borrowed clothes. She almost didn’t go to Masada.

That morning, Studley’s friends Bekah and Sean stopped by Levy’s hotel. They found her eating breakfast, and delivered the fourth and final fortune cookie, which said, “Accept the next proposition you hear.”

She smiled, thinking how sweet it was that Studley went through the trouble of mailing the cookie to his friends.

Still feeling queasy, Levy decided to accompany her group to Masada anyhow. They arrived and took the cable car up the mountain. When they got to the top, Levy saw a green T-shirt from afar, with the words “Real Men Marry Rabbis.” “Oh wow,” she thought. “That’s funny, someone else has that shirt. Let me see who it is.”

It did not occur to her that it was Studley. She was a few feet away when she realized it, but it was as if she was in shock; her brain wasn’t fully processing that it was him.

They hugged, and meanwhile, Levy’s mother, who was on the trip, started to realize what was happening. Levy looked up to see Sean and Bekah, and it slowly dawned on her what Studley was up to. He took a step back and told her “Ani ohev otach,” (“I love you” in Hebrew) and then, in very formal Hebrew that Bekah had taught him, he asked, “Ha’im at maskima lehithaten iti?” (“Would you marry me?”)

Levy was still so stunned, she blurted out “ken” (“yes”), followed by another “What are you doing here?”

Studley took out the ring and put it on her finger. They took a few moments, and then went back where the group was standing.

“I want to introduce everyone to Roger, my fiancé,” said Levy. The group broke out into “Siman tov, mazel tov,” and Studley and Levy did a little a dance. Studley then opened a bottle of wine that he had brought with him for a toast.

Studley joined the group for the rest of the tour — appropriate now that he was the rabbi’s fiancé.

Looking back, Levy said,”I’ve lived in Israel for three years, and I had been feeling sad at the beginning of the trip that I wasn’t able to share this with my partner. So then we had a week together to experience everything, and had many powerful moments. It was really wonderful to be able to share it. And now Israel and loving Israel is something we can share.”

Studley agreed, saying, “It’s hard to say how moved I was by that trip. It was very meaningful. After I got back, I felt I was in the wrong place.”

The Shabbat after they returned, Levy introduced her fiancé to her congregation as the new rebbetzin starting soon at Kol Shofar. Studley even got a baseball cap in Mea She’arim that says “Rebbetzin” on it.

As for his rather unusual proposal, Studley said, “Chai is a rabbi, so proposing in Israel was something Jewish I could give her that was meaningful. It was something that I could bring to our life together.” And then he added, “It also warmed people up to me at her shul. I now have 600 Jewish mothers who are kvelling over me going to Israel and proposing. I’m being welcomed in a way that’s wonderful.”

The wedding is set for Jan. 14 in San Francisco. 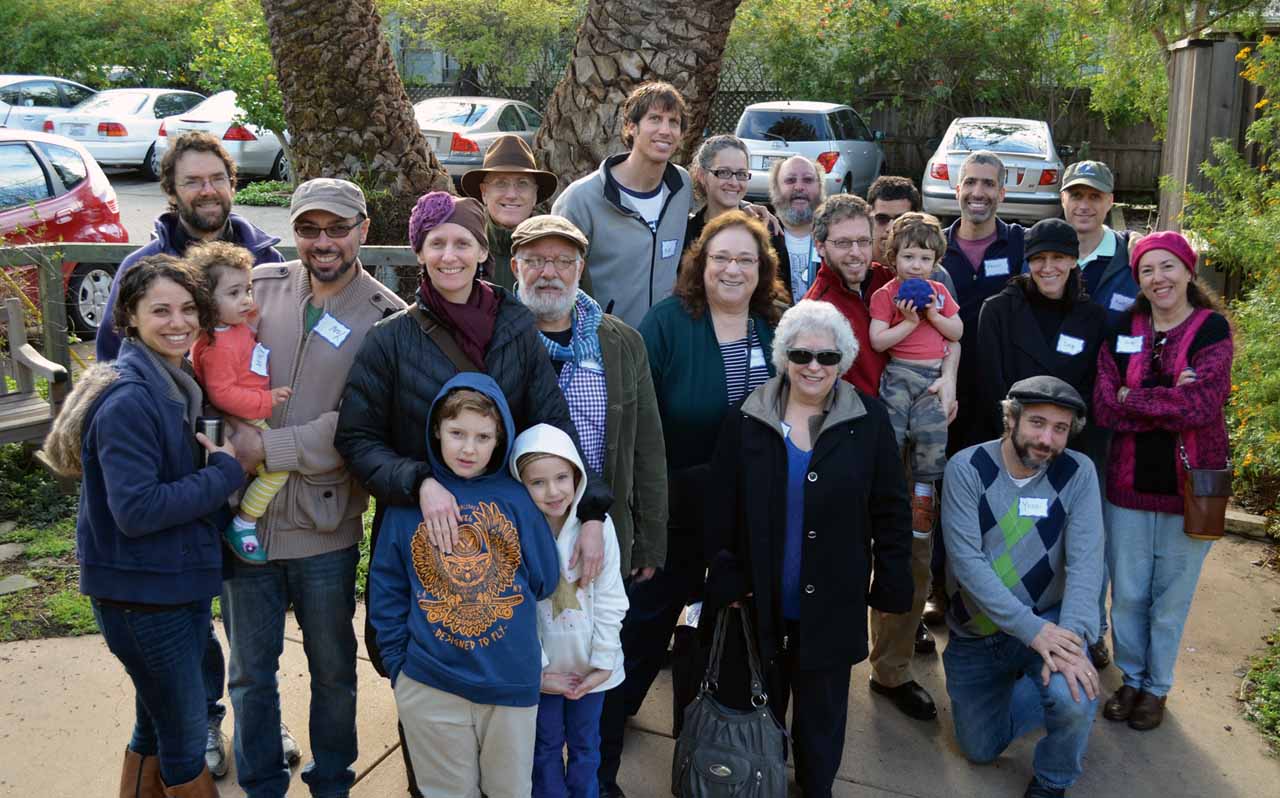