Wire creator finds a muse on the streets of Baltimore

David Simon should be delirious with joy.

After all, he’s a successful journalist, author and TV producer. He wrote the best-selling book “Homicide: A Year on the Killing Streets,” based on time spent with the Baltimore P.D. homicide squad. That became the successful NBC series “Homicide: Life on the Street.”

His next book (written with retired homicide cop Ed Burns) was “The Corner,” about the drug trade in the city. That became an HBO miniseries.

His most recent show, “The Wire,” returned for its fourth season on HBO on Sept. 10. It has won widespread critical praise (as well as a Peabody Award) for its gritty realism, its intellectual honesty and its viscerally charged stories.

So why isn’t Simon happy? Perhaps because his work on the dark side of Baltimore has left him with a sense of despair.

His description of the show: “‘The Wire’ is about the end of the American empire, about our inability to solve our own problems.”

That’s not the kind of copy HBO is likely to splash across ads promoting the series. But it does reflect the series’ storylines, especially this year when “The Wire” follows four African American middle-school students as they try to navigate the mean streets of their neighborhood. The show also focuses on the obstacles placed in front of a new and well-meaning white mayor trying to make the city better, corruption at the highest levels of government, and police brass that plays politics instead of fighting crime.

This is not simply noir; “The Wire” is midnight on a freezing, overcast, moonless night when there’s not a star visible in the heavens. It is disheartening, yet riveting.

In a phone interview, Simon, 46, talked about how his Jewish upbringing influenced his work, black anti-Semitism and the radical changes that need to be made if the nation is to be saved.

He was born in Silver Spring, Md., raised in a middle-class Conservative Jewish family in an integrated neighborhood. An apartment building across the street from his house had what he calls “a significant African American and Latino population,” and he numbered blacks, Latinos, Asians and even an Iranian child among his close friends.

Simon attended Hebrew school and had a bar mitzvah, but it wasn’t so much his religious upbringing as what he calls “the tribal aspects of Judaism” that impacted him. By that he means his faith is “very inclusive and liberal. My family was very liberal. The arguments around the dinner table weren’t liberal vs. moderate, but who would make a better president, Robert Kennedy or Eugene McCarthy. My father was all the way to the right — he supported Hubert Humphrey.

“There were lots of books in the house, including Judaica. Three newspapers were delivered to the house every day, four on weekends. We argued politics. We were a post-modern, suburban intellectual Jewish family. Friday night dinners were very much about ideas.”

Were they Shabbat dinners? “If they were on Friday nights, they were Shabbos, de facto. Shabbos licht, Kiddush, motzi. We may not have been much on shul, but family ritual was intact.”

With that background as his moral compass, Simon spent 13 years as a crime reporter for the Baltimore Sun, spending significant time for the paper, and subsequently his books, on the street, getting to know its inhabitants.

Especially when he speaks to synagogue groups regarding his experiences, he’s asked about black anti-Semitism. Typically he tells an anecdote that occurred while he was researching “The Corner.” Simon and one of the young men he wrote about stopped off to pick something up in his home office. The youngster saw a photo of Simon dressed in a tuxedo and said “Whoa, Dave, you look like a Jew.”

“I asked him what he meant and he just shrugged and smiled,” Simon says. “On some level, that was an anti-Semitic statement, but it had no meaning, no malice. He’d been hanging around me for six, eight months and religion came up. He just had a preconceived notion of some people; it was a disconnect from two tribes that don’t know each other.

“I was the only Jew these guys have seen in the last 20 years, since the Koreans took over the corner groceries. There’s no connection. [Jews] don’t exist for them.”

Ironically, Simon has been accused of anti-Semitism. There are two regular characters with Jewish names: Rhonda Pearlman, a conscientious assistant state’s attorney, is one of a handful of generally positive characters in the show. The other, Maurice Levy, is a venal, amoral drug lawyer.

“Why did we make this guy Jewish? Because when I was covering the drug trade for 13 years for the Sun, most of the major drug lawyers were Jewish. Some of them are now disbarred and others are not but came pretty close. Anyone who is anyone in law enforcement in Baltimore knows the three or four guys Maury Levy is patterned on.

“If I have people from every other tribe in Baltimore portrayed negatively, everyone is maligned in some way, how can I not do that to the Jewish guy? How can I pull that punch? At that point I’m just being hypercritical. Here are good people from my own tribe who say how can you do that, and my answer is how can I not?”

That’s not to say there haven’t been ethnic problems, but those were directed at him because he was white, not Jewish. Some people resented the fact that it was a white man telling this “black story.”

For example, in 1997 when “The Corner” was released in hardcover, Simon arranged to have one of the teens whose story he tells accompany him on a promotional tour. On a West Coast call-in radio show, Ishmael Reed, the black author and activist, called in and yelled at the teen.

Reed, says Simon, was “furious” and accused the teenager “of being manipulated and led around by this white writer who was using him to foster a negative image of African Americans. [The young man], to his great credit, said it wasn’t like there was a black writer on the corner waiting to tell this story.”

Later, when the book was being filmed for HBO, there were tensions between Charles Dutton, the director, and Simon. “I think he struggled with the fact that I’m white,” Simon remembers. “In the end we did work together, and I’d work with him again. But I think he would have preferred if I was black.”

On the other hand, Spike Lee, who once argued that only a black man could direct “X,” the biography of Malcolm X, loves the series, and came close to directing an episode this season. But the timing was bad. Perhaps next season, if HBO renews the series.

“The Wire” is one of the few shows on the air that is both entertaining and has a serious message: in this case, that something must be done about the drug trade. Simon favors legalizing it and taking the money spent fighting the war and housing drug dealers in prisons on education and social welfare programs.

Of course, he understands it’s not going to happen. The political system, he says, “is paralyzed by ideology and partisan rancor.”

And that is why David Simon isn’t smiling. 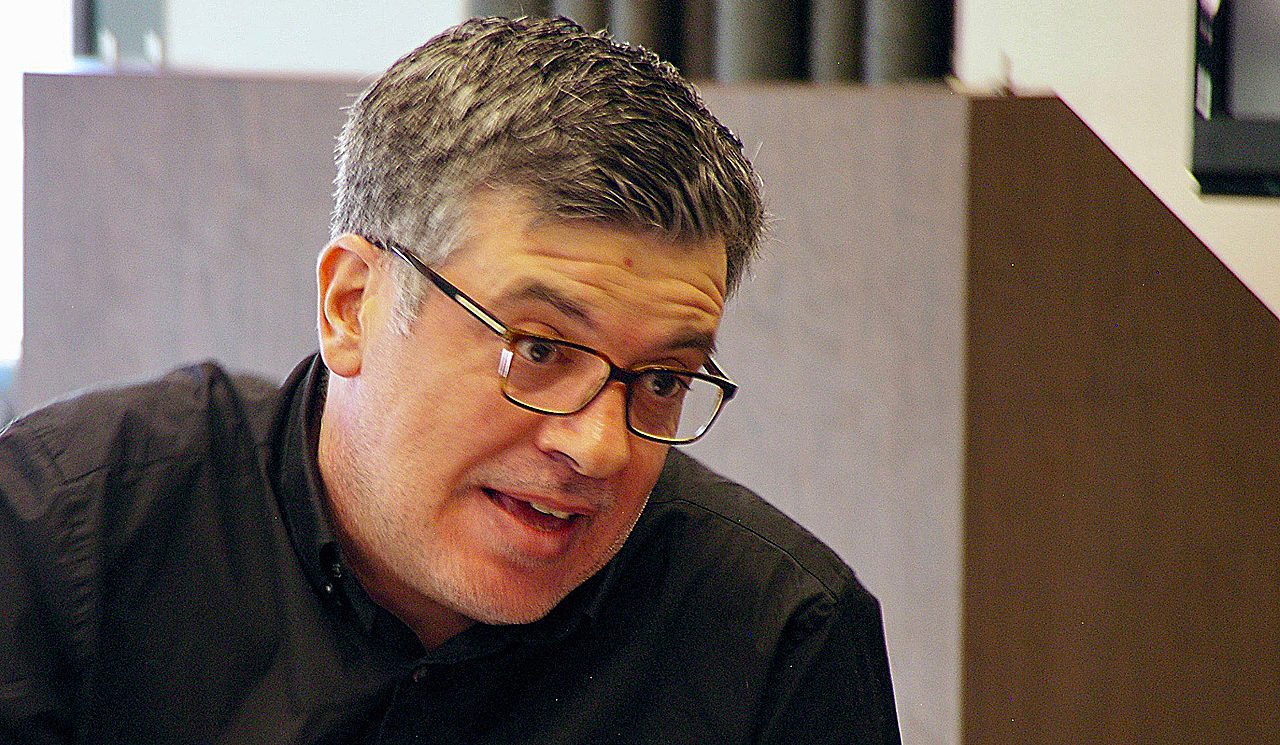