During a typical performance, often taking place in a seedy Berlin club, Daniel Kahn squeezes the accordion, tickles the piano keys, blows into a harmonica and strums the ukulele and guitar. He also sings to the audience — through a megaphone.

Clearly, Kahn is a man who wants to be heard.

Among other roles, Kahn is the leader of the Painted Bird, a Berlin-based, klezmer-punk-meets-Yiddish-folk act he formed in 2005. Along with the Painted Bird, the Detroit native also performs in a Russian disco band, a Gypsy hip-hop act and a multilingual group that covers the Rolling Stone’s “Sympathy for the Devil” in Yiddish.

Kahn will bring the Painted Bird stateside this month as part of the Jewish Music Festival. The group will perform in three Bay Area concerts beginning Thursday, March 26 at the Rickshaw Stop in San Francisco. They also will perform March 30 at Don Quixote Music Hall in Felton, and April 2 at Congregation Beth Am in Los Altos Hills.

The San Francisco concert could have been a homecoming of sorts for Kahn, if fate hadn’t stepped in in 2005. After spending some time in New Orleans, Kahn was planning on moving to the Bay Area when he met a fellow klezmer musician while working at Canadian music camp KlezKanada. The musician convinced Kahn he should go check out the growing klezmer scene in Berlin — and even offered to let Kahn crash in his empty apartment for a few months.

Daniel Kahn and the Painted Bird

The musician then offered Kahn one note of advice: “Be aware, in Germany you’re going to made be more aware of your Jewishness than ever before.”

Kahn was raised in an assimilated, suburban Jewish household in Michigan. He was bar mitzvahed and spent time performing in Jewish theater, but felt disillusioned by the “mainstream Jewish community.” It wasn’t until he went to KlezKanada and eventually Berlin that he reconnected with his Jewish roots.

“I originally went to KlezKanada to engage with the music, not identity politics,” he explains. “I was almost looking for a way back into Judaism, but on my own terms — I found that through klezmer and Yiddish culture.”

Kahn also found that once he moved to Berlin, his Jewishness was indeed unavoidable — as was the realization that he had a lot to learn about Germany’s Jewish history.

“The history of Jews in Europe that I’d been given in Hebrew school and through Hollywood wasn’t sufficient to explore the actual dynamic of the world that was destroyed,” he says. “We are only taught about those last five years [of life in Germany] — the Holocaust is not Jewish culture. The Jews were the object of that, not the subject.”

In creating music for the Painted Bird, Kahn mined the rich musical history of Europe’s Jews, along with old Yiddish poems (he is fluent in English, German and Yiddish, and speaks some Russian).

On the Painted Bird’s newest album, “Partisans and Parasites,” Kahn used a variety of sources as lyrical and musical inspiration. The album includes a 60-year-old Yiddish ditty, a German cabaret song, some klezmer folk tunes and his interpretation of an old Chassidic song, along with original pieces.

Now that their second album is out, Kahn is once again taking his act on the road with the rest of the Painted Bird, which includes Michael Tuttle on bass, Hampus Melin on drums, Michael Winograd on clarinet, and Dan Blacksberg on trombone. The group has performed all over Berlin and Europe, from JCCs to klezmer festivals to cabarets — but more often then not, they play dingy underground punk clubs.

“I enjoy playing Jewish festivals, but I also value playing in punk rock clubs, in places where people wouldn’t expect it — and they usually really dig it,” Kahn says.

Kahn may one day leave the chaos and bright lights of Berlin for a calmer existence in the Bay Area, but it won’t be until he’s ready to settle down.

“I love Northern California. It is the only place on the planet that I could imagine ending up in — the weather, the politics, even the darker side of it all,” Kahn says. “I’ve been avoiding [moving there] because I’d never want to leave.”

For more information on Daniel Kahn and the Painted Bird visit www.paintedbird.net. 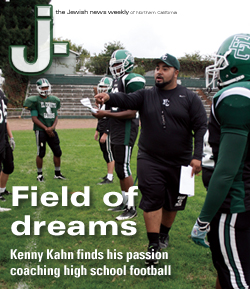