It was a moment 50 years in the making.

The late Benno Elkan, a prominent metal sculptor who fled the Nazis and later was knighted by Queen Elizabeth in England, was having his papers installed in Germany’s national archives earlier this month in Berlin.

But it wasn’t just “papers.”

It was old photos of Elkan’s sculptures (most notably the famous menorah at the Knesset in Jerusalem and two bronze candelabra at Westminster Abbey). It was glass slides of his world travels. It was a letter to Elkan from Winston Churchill and his wife, Clementine.

And it was a 1933 letter from the Nazis demanding Elkan halt his work in Germany. He did, moving to London, where he died in 1960.

The guest of honor at the Oct. 7 ceremony in Berlin was Beryn Hammil, Elkan’s granddaughter. The resident of Corte Madera in Marin County didn’t understand a word of the proceedings, all in German, but the smile on her face couldn’t have been any bigger.

For she knew the whole amazing story, the story of how the treasure trove of her grandfather’s belongings was almost lost forever.

Elkan was a Jew, born in Germany in 1877, who created famous busts, medallions, plaques and monuments, mostly out of metal. Following his death in 1960, his son, Wolf Elkan, went to London to collect his father’s things. Of the multitude of items (including laundry receipts and other evidence of daily life), Elkan’s lifetime belongings were condensed into six moving boxes.

Wolf kept the boxes for 20 years, and after he died, his son Tony inherited them. But Tony never even opened them, instead letting the boxes languish in his Berkeley garage for another 30 years.

Finally, the boxes were brought to Hammil’s Corte Madera home in the fall of 2008.

“Tony said, ‘It’s your turn,’ ” Hammil recalled of the day her cousin gave her the six boxes. “I asked what was in them and he didn’t know. He never looked inside. And that’s when this thing opened up like Pandora’s box.”

What was supposed to be a quick drop-off turned into a four-hour foray into the past, as Hammil and Tony Elkan extracted vestiges of a nearly comprehensive account of their grandfather’s life and career.

Beryn Hammil skims the pages of the coffee table book she created of her grandfather’s work. photo/stacey palevsky

“The things we saw were amazing,” Hammil said.

Inside the old boxes were stacks of photos of Elkan’s works, fragile glass slides of his life’s travels and his travelogues. There was also the ink-stained letter from Churchill, and additional letters from other famous people.

Another letter gripped Hammil instantly. It was written in 1933 by Nazis, demanding Elkan halt his work in Germany.

Then they came across a manuscript of Elkan’s unpublished autobiography, with his handwritten notes in the margins, and appendix and addendums. Hammil calls the 1,000 or so pages “the most significant body of work” among the findings.

The two cousins started separating the items into categories: all photographs were placed in one area, papers (mostly written in German) in a different spot, and newspaper and magazine articles in another.

Next they sorted the images, the majority of which depicted Elkan’s most famous works — the menorah outside the Knesset, and two bronze candelabra featuring images from the Hebrew and Christian Bibles at Westminster Abbey. Mixed in were photographs of busts of renowned politicians, patrons of the arts and the wealthy who commissioned Elkan to memorialize them in bronze.

Elkan did the first statue in Britain of Sir Walter Raleigh, and he also created Frankfurt’s Great War Memorial, using mourning mothers as symbols of loss in World War I. It  was removed by the Nazis in 1933 and re-erected in 1946.

In addition to Churchill and Raleigh, notable Elkan pieces include John D. Rockefeller, Chaim Weizmann, the first president of Israel, economist John Maynard Keynes and Yehudi Menuhin, a Jewish American violinist and conductor whose distinguished career was one of the longest of the 20th century.

Perhaps the most eye-opening find for Hammil was a set of letters her parents had written to Elkan and his wife, Hedwig Einstein Elkan, in London after World War II.

The letters, Hammil said, “dispelled myths, rumors and innuendo that existed in my family.”

Hammil said she “got a [family] history for the first time in my life. They were very touching, charming letters. But now those are part of the archives. I don’t need them. I know what they contain. I am complete now.”

Hammil knew right away that the content of those boxes was too significant to store in the same spot her uncle and cousin had used — the garage.

“I don’t have children to inherit the collection,” she said. “So my practical concern was if I have these papers, what happens to them when I’m gone? They are bigger than I am and they belong with history, where scholars and others can avail themselves of them.”

Shortly thereafter, Hammil connected with Wolfgang Trautwein, the director of the archive at the Akademie der Künst (home of Germany’s national archives) in Berlin. He needed little convincing to include Elkan’s materials in the archives.

While on business in California, Trautwein stopped by Hammil’s home to peer through the collection.

To prepare for the visit, Hammil put out several of her grandfather’s medallions and plaster casts of Adam and Eve from the Westminster Abbey candelabra. Then, while placing a silver cup containing Elkan’s old pens onto the table, tears began to well in her eyes.

“I knew I was in touch with something more significant than just me,” she said. “Dr. Trautwein was very impressed — and after lunch, he was like a kid at Christmas time. He could not wait to see what was in the boxes.”

After taking page after page of notes, Trautwein put his notebook aside and told Hammil, “Of course we’ll take your grandfather’s papers.” And late last summer, Akademie archivists began cataloguing the materials that Hammil donated.

In September 2009, Hammil traveled to Berlin to see the building that now houses her grandfather’s archives. While enjoying lunch at restaurant overlooking the city, she experienced a feeling of contentment. It’s what her grandfather would have wanted, she thought.

“All of Berlin was in front of me, the German flag was flying and I got that my grandfather was smiling and very happy,” she said.

“I cry when I think about it. Before I had the boxes, I was oblivious. If you don’t know something exists, then you don’t know what you’ve been missing.”

Hammil said she has few childhood memories of her Grandpa Benno and her Grandma Hedwig. She does remember having a children’s book read to her — a book that was written and illustrated by her grandfather.

She also knows that she saw them twice on visits to New York, once when she was just an infant and again when she was 7. She has no recollection of the first encounter, and relies mostly on photographs to stimulate her memory of the second.

Most of the details of visiting with her grandparents on their trips to the United States are murky, but what she does remember makes her smile and laugh.

Hammil grew up more familiar with Elkan’s work than with the man himself. She says what impresses her most was his depth of knowledge of Judaica and the history of Judaism. That he dedicated works of the latter part of his career to commemorating Jews in the wake of the Holocaust instills in her a sense of pride.

“Everybody knows the Knesset menorah,” Hammil said, “just like everybody knows the Statue of Liberty. But nobody knows the artists behind the works. Who that person was becomes less important than their contribution to humanity. If I can do something in my lifetime to keep my grandfather’s image alive, I’ll do it.”

Elkan is perhaps known best for the seven-branched menorah that stands more than 15 feet high on the edge of the Rose Garden outside the Knesset. It depicts the spiritual struggles of the Jewish people — spanning the centuries from biblical times until the formation of the State of Israel.

Members of the British Parliament donated the bronze monument in 1956 to honor and celebrate Israel’s eighth Independence Day.

Engraved with the passage, “Not by strength and not by power, but by my spirit, says the Lord who rules over all,” the menorah includes about 30 important events, idioms, characters and terms from the Jewish history. It is considered a “visual textbook.”

Elkan’s final piece, a memorial to the victims of the Holocaust, never got beyond clay. It disintegrated in an abandoned warehouse after his death.

It is Hammil’s dream to have it recreated.

She would also like to see all 110 of her grandfather’s original medallions in a museum exhibit. Her challenge now, she says, is to find a sponsor to fund the project, which she envisions would travel throughout the United States and Europe.

For now, Hammil has a self-published coffee table book with pictures of Elkan’s busts, and she recently developed a website of links (sites.google.com/site/bennoelkan/home).

Asked how this experience has changed her, Hammil said, “I cry more often. It’s an interesting process to go rummaging through the past. Finding out the truth can be cathartic and freeing. So that’s a good thing.”

Before the dedication, archivists at the Akademie der Kunst took Hammil to a display case of her grandfather’s work. Not being able to speak German didn’t prevent her from conveying her emotions.

“I was beyond words,” Hammil said. “All I could do was clutch my heart and show other gestures of gratitude that transcend language.” 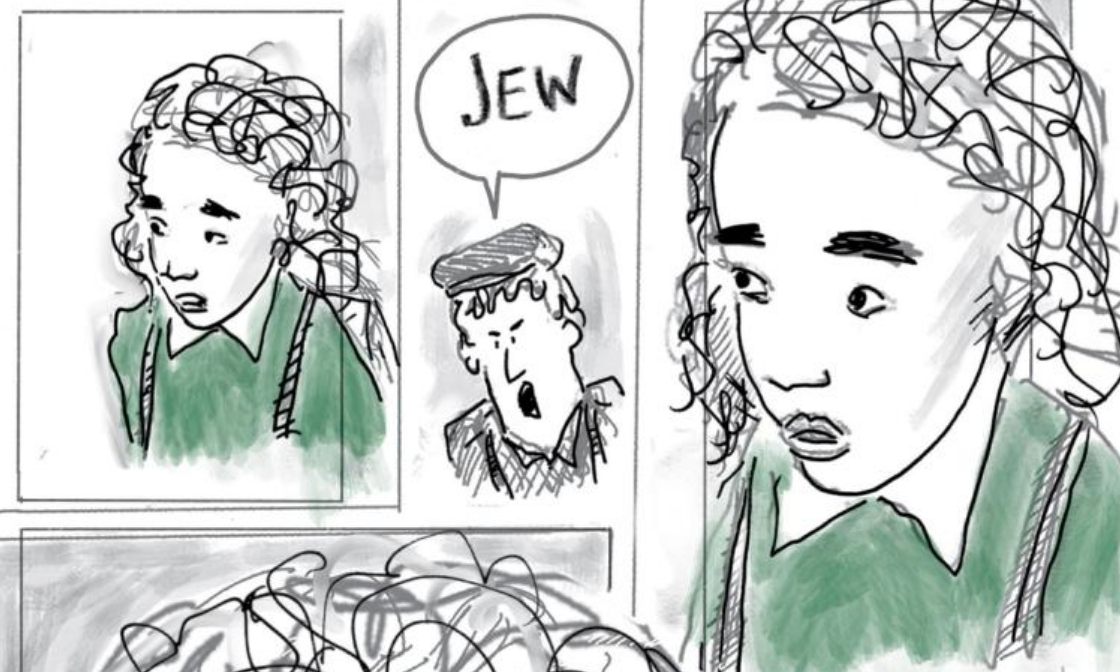