Jaden Jarmel-Schneider, 11, of San Francisco, took third place in the Celebrate America Creative Writing Contest on the topic “Why I Am Glad America Is a Nation of Immigrants.” A fifth-grader at Alice Fong Yu Elementary School, Jaden wrote a creative essay about a young man who finds a letter written by his grandfather as he was leaving Düsseldorf to escape the Holocaust.

“If my family survives and I have not been heard from, tell them that I was most likely killed on my way to America.  I hear that the people there aren’t against Jews and that we are treated fairly,” he wrote.

The contest, sponsored by the Northern California chapter of the American Immigration Lawyers Association, is open to fifth-graders and designed to nurture dialogue on the benefits of living in a nation of immigrants. About the issue, Jaden added, “If I lived in a country where everyone celebrated the same holidays and ate the same food, life would be dreary. Having immigration helps America be a very exciting place with stimulating cultures.”

Stewart Florsheim writes that his first reading for “A Split Second of Light,” his recently published book of poetry for which he won an honorable mention in the San Francisco Book Festival, was at Tmol Shilshom bookstore in Jerusalem. “It was quite wonderful!”  he said. It was also a “humbling experience” because it is the same bookstore in which the renowned late Israeli poet Yehuda Amichai often read. If you missed the reading in Israel, you can hear the Berkeley poet in June at bookstores in San Francisco and Berkeley. Visit www.StewartFlorsheim.com for dates … Ezra Barany of Oakland likens his first book, “The Torah Codes,” to a “Jewish version of ‘The Da Vinci Code.’ ”  According to the book’s website, Barany has been fascinated by codes and puzzles since he was a kid.  His interest in Bible codes was piqued during an Aish HaTorah Discovery Seminar in Jerusalem. Barany is donating a portion of the proceeds from book sales to local Jewish schools … Another Israel–Bay Area connection: Lauren Wilner, of San Rafael, has been living in Israel for the past couple of years and is blogging about cooking on www.MyJerusalemKitchen.wordpress.com. Wilner includes recipes she’s found, developed or inherited from her Persian grandparents, along with a little chat.

Eleanor Levin of Los Altos writes that her son, Scott Levin-Gesundheit, was selected to give the traditionally humorous Ivy Oration for Class Day on May 25, held the day before commencement from Harvard College, one of two schools within  Harvard University. He was on stage with comic Amy Poehler, the main speaker. Levin-Gesundheit was an editor of the Harvard Lampoon. His presentation is now on YouTube. P.S. In case you were wondering, Levin says Scott’s dad, Neil Gesundheit, is a descendant of the Gesundheit family of Poland and related to Rabbi Yaacov Gesundheit, the chief rabbi of Poland from 1870 to 1874. The name means “good health.”

Tikkun magazine’s Rabbi Michael Lerner, Dave Belden and Peter Gabel received Utne Reader’s Independent Press Award in the category of body/spirit coverage. In announcing the award in an email, Lerner noted that, ironically, the magazine needs to raise money to print its summer edition. It is online at  www.tikkun.org … Paul Schwarzbart, a Holocaust survivor, and his wife, Sharry Schwarzbart, of San Rafael, were guests at a May 2 Yom HaShoah commemoration at the state Capitol in Sacramento, where they delivered copies of Paul’s autobiography to members of the California Legislature. 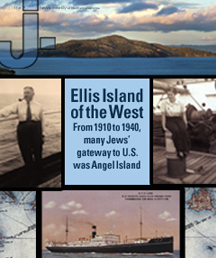