Linda Mankin has been making music her entire life, and she doesn’t plan on stopping anytime soon. When she was a little girl in Yonkers, N.Y., her father would sing popular songs and Jewish folk songs to her and ask her to play them by ear on the piano.

“Little did I know I would be teaching and playing those songs all these years later,” said the sharp and youthful Mankin, who is still going strong musically and otherwise at the age of 84. She maintains a schedule that even younger people would have a hard time keeping up with.

Mankin, who lives at the Moldaw Family Residences in Palo Alto, is director of the Moldaw Singers. Since she took over the combined role of arranger-accompanist-conductor for the choral group early this year, it quickly grew from just four members to 24.

“We are all having wonderful fun,” Mankin said one Monday evening as the group prepared for a winter concert. They were practicing a repertoire combining traditional Chanukah songs such as “Ma’oz Tzur” and the Ladino “Ocho Kandelikas” with holiday-season standards from the Great American Songbook.

The Moldaw Singers is merely one of Mankin’s many musical commitments on the Peninsula and in the South Bay. A keyboard specialist, she plays with the Serenaders, a 15-piece dance band and the “official” band of Sunnyvale (the group performed at celebrations for the city’s 100th anniversary in late summer). She also plays with the Unicorns, another dance band, as well as with the six-piece combo Les Sophisticats. All of the groups play Big Band music from the 1930s and ‘40s, and Mankin was the only female player in any of them until recently, when another woman joined the Sophisticats.

In a typical week, Mankin plays a couple of gigs with these groups and directs the Moldaw Singers on Monday night. A lifelong music teacher, she continues to give jazz lessons, and she occasionally sings with a madrigal choir. As accomplished as she is, Mankin still takes lessons. “I’m currently taking a harmonica class to improve my breathing technique,” she said. She also finds time to regularly attend Torah study class at Congregation Beth Am in Los Altos Hills.

The daughter of immigrants from Bialystok, Poland (where her father taught music and art), Mankin began studying piano at age 5. As she got older, she sang in the Westchester All-County Chorus, and in 1949 she earned a music education degree from New York University. There, she directed a Jewish choir, though eventually it became an interfaith group. “We recruited non-Jewish male students to join us,” she recalled. “We didn’t have enough Jewish guys for all the male parts.”

While in college, she also sang with the Robert Shaw Collegiate Chorale and got to perform Beethoven and Toscanini under the direction of Leonard Bernstein at Carnegie Hall. The summer after graduation, she earned a scholarship to the prestigious Tanglewood music center in Massachusetts to study with Aaron Copland. It was at Tanglewood where her late husband, Herbert, a dentist, proposed marriage to her.

Several years later, the couple moved to the Palo Alto-Los Altos area, where Mankin has lived for the past 50 years and she and her husband raised their family (save for a period during the Vietnam War, when Herbert was posted in Columbia, S.C. While there, “I sang in a radio commercial for ham,” Mankin recalled with a laugh).

Mankin has a daughter and two sons, six grandchildren and five great-grandchildren. The great-grandchildren, the children of a granddaughter who made aliyah, live in Israel. Mankin, who characterizes her upbringing as “not religious, but very Zionist,” has visited Israel four times, most recently this past summer.

She taught music at Foothill College in Los Altos Hills for 30 years, and earned a master’s in music composition from Stanford.

Not long after her husband died in 2007, Mankin moved to the Moldaw senior residences on the Taube Koret Campus for Jewish Life. When a couple of fellow residents asked if she would take on the Moldaw Singers, it wasn’t a difficult decision. “I thought for a day and said, sure.”

Performances at Moldaw and other venues, such as Avenidas, the senior center in Palo Alto, give the group specific goals to work toward. But just as important, the weekly practices give the seniors a chance to socialize with one another. “It gets them stimulated and projective. They find their voice and sing out,” Mankin said. “It’s such an upper.”

And she keeps them upbeat; as Mankin conducts simple arrangements and partner songs from behind her keyboard positioned at the front of the rehearsal space, she encourages the singers with comments like, “This group is so brilliant!”

Paul Kent sat in the back row at a recent rehearsal. The vigorous 92-year-old is one of the oldest members of the group. He’s also one of the newest. “They needed another man’s voice, so I figured, why not?” said Kent, who downplayed his singing abilities. “I’m really more of a shower singer … though I did sing with a boys’ choir when I lived in Vienna before I left in 1938,” he said.

Kent did not need to worry about being rusty. Mankin led him and the others through some preparatory breathing exercises, and patiently directed them to use pencils to mark notes on their song sheets to help them remember when to hold a note, or when to pause.

“I never thought I’d still be doing this at my age,” Mankin reflected. “But I don’t intend on slowing down.” n 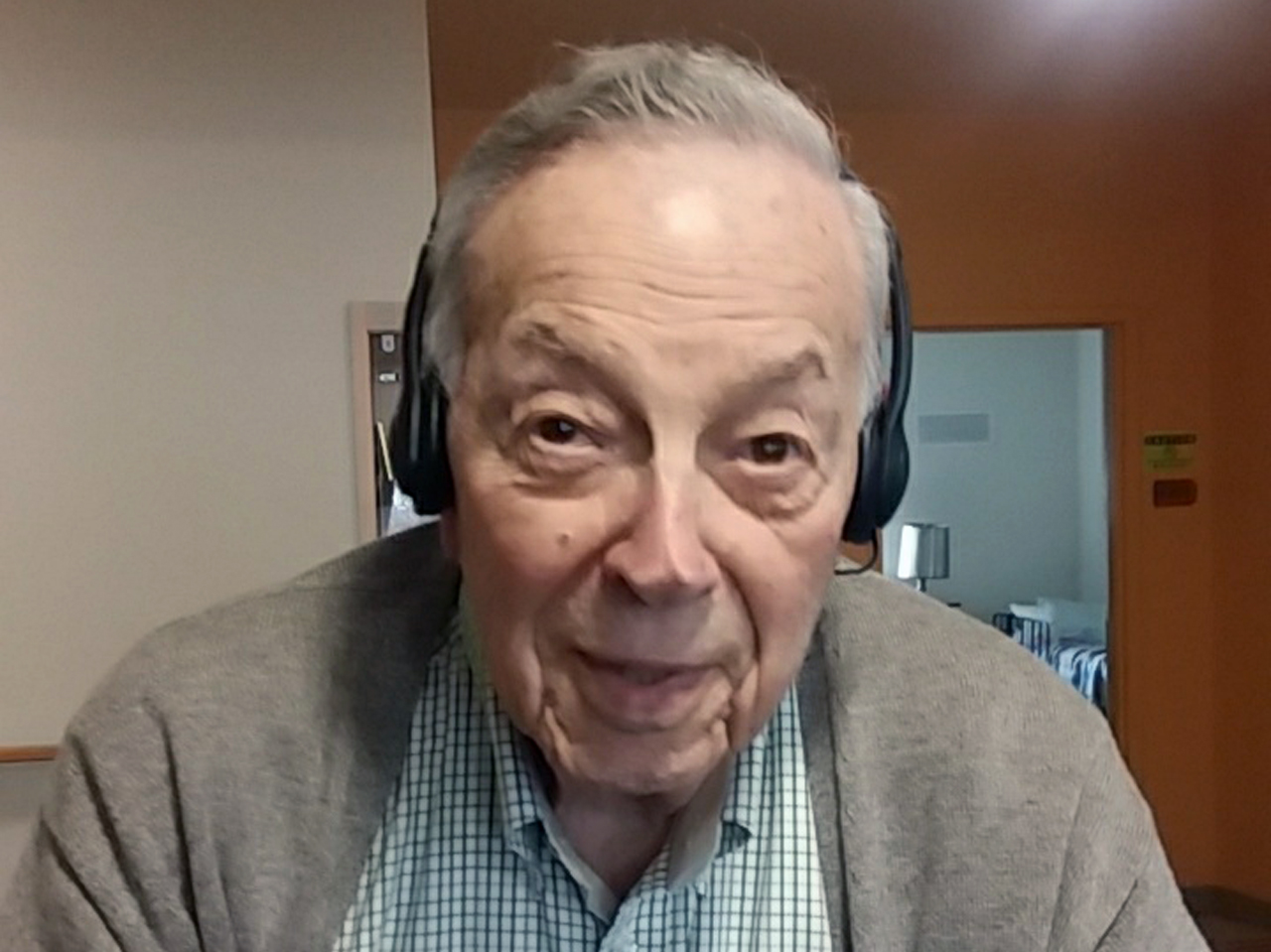