Like a 10-year-old who finds out a candy factory is being built in his neighborhood: That’s how I felt when I learned that a real Jewish delicatessen would open only two blocks from my office.

Blintzes and pastrami and matzah balls and chopped liver just a three-minute walk away? Tremendous!

Located in downtown San Francisco across from the Crocker Galleria, Shorty Goldstein’s opened in early March to much anticipation. Like many eateries in the Financial District, it’s open only on weekdays, closing at 4 p.m.

The small, narrow restaurant has a modern nostalgic look. One long wall is brick, and the other side looks like a black chalkboard. Scrawled at the back is owner-chef Michael Siegel’s family tree, and the menu is written at the front. Family pictures hang in between.

The nostalgic portion of the décor backs up the restaurant’s moniker: Goldstein was the maiden name of one of Siegel’s great-grandmas, and Shorty was her nickname (she stood only 4-foot-10). Many of the recipes were handed down from Siegel’s relatives.

But the spot is sleek and modern, too, with hardwood floors and bright, fashionably uncomfortable turquoise stools. There are only 23 of them, all along counters, so it’s not an ideal spot for larger parties. You order at the front counter, take a number, and wait for your food to come out of the small, practically makeshift open kitchen.

For my first visit, I waited a few weeks until the long lines had petered out a bit, giving Siegel and his crew a chance to find their groove.

Most of what I tried was really good, especially the pastrami sandwich and the chopped liver. The pastrami, like all of Shorty’s meats, is cured in house, and it was fatty and sliced thick, piled diagonally on the rye to give it some decent girth. It reminded me a bit of the much-ballyhooed brisket sandwich at Mile End Deli in Brooklyn, N.Y.

Chef-owner Michael Siegel (center) talking to customers in his deli

Shorty’s housemade mustard on the pastrami sandwich (with more in a small tureen nearby) was too spicy for one person in my group, but I loved its piercing, pointed finishing kick. For now, all of the sandwiches are served on a mild, unseedy rye bread, and there are no bagels.

Nanna’s Chopped Liver, served in stout jam jars, is a little eggier than some, but it is smooth and flavorful. It’s served with toasted rye points and pickles.

Shorty’s house-brined pickle lineup is large, with pickled cauliflower, beets, fennel, carrots and asparagus. I’m more of a pickle traditionalist, so those don’t really cut it for me — especially when I’m looking for a big, crunchy sour dill, or even half-sour. Shorty’s does serve a more traditional pickle spear alongside some items, but it has spices that take it away from the old-time deli pickle experience.

While I’m not always a fan of modern twists on classics, some are grand slams, such as Shorty’s salted caramel New York–style egg cream. Chocolate and vanilla are also available.

Half a pastrami sandwich

Siegel, a native of Tucson, Ariz., worked as a chef for five years at San Francisco’s Betelnut, where he excelled in putting a contemporary spin on Asian delicacies. He even became a “mochi master,” working for a year to perfect the process of making the small Japanese rice cake and creating new flavors and textures.

But Jewish food runs through his veins. “I grew up with this food,” he said. “My family is from Philadelphia and New York.”

Shorty Goldstein’s is more along the lines of a Wise Sons or Mile End deli, taking old favorites and adding creative ingredients to bring them into a contemporary milieu. But make no mistake about it, Shorty’s does have classic Jewish offerings: noodle kugel, pan-roasted brisket, prakas (beef-stuffed cabbage), latkes, matzah brie and “Shorty’s potato knish” (Great-Grandma Shorty was known for them). Fanciers of fish are limited to a gravlax plate on the brunch section of the menu and Friday’s sandwich of the day, tuna salad.

Ingredients such as roasted shallots, pickled onions and watercress make appearances every now and then; one rugelach is filled with strawberries and black pepper. And so it goes at classic-modern Jewish delis.

The place doesn’t quite smell like a Jewish deli yet. But since it has hot mustard within diners’ reach (as opposed to places where you have to ask), I’ll let Shorty’s slide on that. For the time being.
Shorty Goldstein’s

A SAD GOODBYE: For those of us who got to sink our teeth into a perfectly crusted, chewy and tasty Schmendricks bagel, this news is going to be extra hard to swallow: After going on hiatus in December, the San Francisco bagel maker has officially decided to discontinue its operation. Schmendricks will not return.

“At this point in our operation, we reached a tipping point where we outgrew our old kitchen, and looking at going forward, there was no viable option,” David Kover, one of the four partners, told me last week. “It’s a big leap to go to the next level.”

Rather than do what would have been an exhaustive search for a brick-and-mortar location, and take a big financial risk as well, the partners decided to travel other life roads. “It’s not a decision we made lightly, which is why we have been so reluctant to announce it,” Kover said.

Schmendricks hasn’t tweeted since Dec. 8, and as of this week, its website still had a notice about “going into a period of hibernation as we figure out our next step. ”

Schmendricks burst onto the scene as a pop-up in the Mission District in early 2012, getting tons of positive press, including being named the Bay Area’s best bagel by the San Francisco Chronicle and San Francisco magazine and getting national ink from Bloomberg and Sunset magazine. It sold carefully crafted, hand-rolled, $3 artisan Brooklyn-style bagels mostly from a sidewalk table on weekends, and at a video store/café a couple of days a week. A lot of time and effort went into creating the recipe and refining the production process, and the skillful use of social media helped create a mini-craze.

One of the partners, Deepa Subramanian, did the baking (and boiling) in a commercial kitchen. But the rest of the partners had full-time jobs, and now two of them, Kover and his wife, Dagny Dingman, have a 9-month-old baby, a big reason to avoid taking a “gigantic financial risk at this point,” Kover said.

“It’s really sad. We worked real hard at it,” he said. “I think we all harbor fantasies about what Schmendricks might have been.”

Kover did leave a glimmer of hope, adding that if money from an investor, or a prime location or opportunity “fell into our laps,” the Schmendricks team would “think very hard about it.”

The San Francisco Giants are trying a new thing this season called #GiantPopUp, which will feature mobile food carts serving items not currently available at games. The short list includes made-to-order pastrami sandwiches from Max’s and knishes either from Max’s or King Knish (as of this week, the team’s food people were still trying to decide). The pop-ups will be located around the ballpark, and the dates are sporadic, so follow @sfgiantfoodie on Twitter to stay in the know … Good news for bagel lovers in San Francisco: The new Upper Haight Farmers Market includes Authentic Bagel Co., which has been making high-grade East Coast–style bagels in Oakland since last summer. ABCo. has its own shop with limited hours and also supplies a handful of East Bay cafés. The farmers market launched April 3 and runs every Wednesday from 3 to 7 p.m. on Waller Street at Stanyan Street. Of note: Of the 70 markets run by Pacific Coast Farmers’ Market Association, this is the first one that has granted a spot to a bagel maker … You might remember that Oakland’s Holy Land Restaurant gave up its kosher certification last October, in part to capitalize on the large crowds at Saturday’s Grand Lake Farmer Market across the street. To that end, owner Miri Levy has started handing out free samples of falafel and hummus on the street Saturdays. April 6 was her first time out there, and she plans to keep it up for a while, so why not stop by for a taste? … The Old World Food Truck, launched last May, hit the big time last month by securing a weekly spot in Off the Grid Fort Mason, the granddaddy of all local food truck gatherings, with 30-plus trucks every Friday from 5 to 10 p.m. The Old World truck sells Jewish and Eastern European delicacies, with new world twists … The glatt kosher Jerusalem Grill and Bar in Campbell will have a booth at the JCC of Silicon Valley’s Israel Independence Day celebration, 1-5 p.m. Sunday, April 14 in Los Gatos … The Napa-based Pastranomy food truck has been showing up in Contra Costa County on evenings and weekends. There have been appearances at the Walnut Creek Farmers Market and in Concord. To stay updated, follow @Pastranomy on Twitter or check out Pastranomy on Facebook … Adam Mesnick, owner of San Francisco’s Deli Board, is quoted in a recent Bon Appetit Web posting about chefs’ tips for better sandwiches. Mesnick’s tip: “Layer hot cherry peppers on tuna salad sandwiches like you would a tomato” … Oakland resident Laurie Leiber has another bagel-making workshop ($55) scheduled for May 5. Her contact info is at www.laurieleiber.com. Six people showed up to the last class, at which Leiber boils down (so to speak) the two- or three-day bagel-making process into two-plus hours. The best story from last time: A participant, once she got home, put aside one of the bagels she made, wanting to find out if it would stay fresh longer than a store-bought bagel. Unfortunately, her husband didn’t know about her experiment, and the next thing she knew, her bagel was gone. He had eaten it. 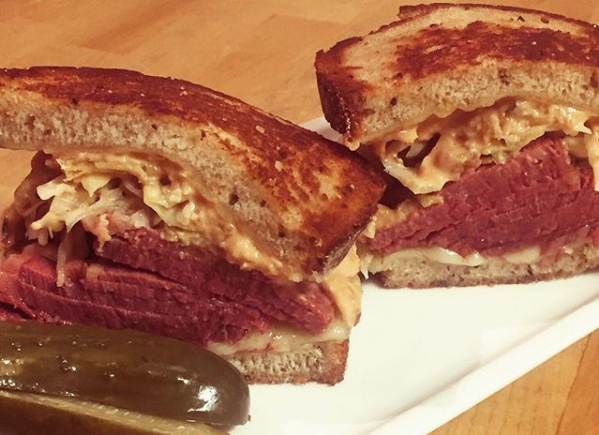