Chef at new S.F. eatery is son of a rabbi

When acclaimed Bay Area chef Daniel Patterson opens his newest restaurant, Alta CA, in San Francisco in early to mid-December, the chef manning the stoves as his executive chef will have a bit of an unusual pedigree: rabbi’s son.

Yoni — his given name is Jonathan but he’s gone by Yoni since he was young — Levy, 36, is the son of Rabbi Jerry Levy of Tiburon. Now performing rituals independently, Rabbi Levy was the founding rabbi of Congregation Shir Hadash, a Reform synagogue in Los Gatos.

Chef Levy’s mother, Jill Becker, lives in San Jose, where Levy grew up, and serves on the board of the Silicon Valley Jewish Film Festival.

Meanwhile, Levy’s sister met and married an Orthodox man from South Africa, and is now living an observant life in Melbourne, Australia, with her sixth child on the way.

“I’m the lone goat in the family who doesn’t do anything religious,” Levy says with a laugh.

Levy has strong memories of his mother’s roasted chicken on Friday nights, kugel on Passover and his favorite — sufganiyot — for Hanukkah. While he always loved food, he really didn’t consider it as a possible career choice until much later.

After a year of struggling through Sonoma State University, he had the realization “that it was hard for me to stay in the classroom; I couldn’t learn like that anymore.”

He knew that he loved to cook, but didn’t yet know that he would grow to love it even more. So he got a job in a kitchen, trading philosophy and anthropology classes for chef’s whites.

Which led to him attending the Culinary Institute of America in Hyde Park, N.Y.

“I think they were just happy to see me work really hard at something,” he says of his parents. “I’m lucky my parents have always been really supportive of me.”

He graduated from the CIA in 2001. Cooking with traif was never an issue for him, since, when he was young, he ate non-kosher food outside the home.

“My parents raised us very liberally,” he said, “definitely making sure we knew who we were, with strong Jewish identities, but without so many rules.”

Levy’s wife, Jennifer Gheith, a curator at the San Francisco Museum of Modern Art, is Palestinian on her father’s side — her father was born in Jerusalem — making Levy feel “like we come from the same place.” And he thinks he makes a damn good falafel.

“I love incorporating falafel balls into other dishes,” he says. “A few years ago, I thought ‘Wait a minute, I’m a Jew and I don’t make falafel?’ So I did all this research and came up with a good recipe.”

As a nod to his heritage, he says, “I also love smoking fish and pickling things. And I make really good pastrami.”

Ron Boyd, an owner of the Daniel Patterson Group, says “We hired Yoni because his cooking is bold, balanced and delicious. He is able to take traditional food and make it modern and interesting; we’re excited to have him on the DPG team.”

Levy has cooked at One Market in San Francisco and at Lula Cafe in Chicago. While the finishing touches are still being put on the menu at Alta CA, the Daniel Patterson Group, which also owns Coi in San Francisco and Plum and Haven in Oakland, describes it as a “New World take on Old World fare.” One of the potential menu items is house-cured pastrami.

Alta CA —  a nod to the region and to the 19th-century San Francisco newspaper that Mark Twain once worked at — is at 1420 Market St., between 8th and 9th streets.

Michael Solomonov, a Philadelphia-based Israeli American chef, hand-picked a group of chef friends to accompany him to the Jewish state to cook a memorial dinner in honor of the 10th yarhzeit of his brother David, who was killed near the Lebanese border by a sniper shortly before finishing his service in the Israel Defense Forces.

Solomonov is the chef at the popular Zahav, and soon two more restaurants in the Philly area: one Israeli and one of the Jewish diaspora. He attributes his cooking Israeli food to his brother’s death, as he was cooking Italian food before that.

When his brother was killed 10 years ago, Solomonov cooked a dinner for his brother’s friends and army unit, and wanted to repeat the gesture for his 10th yarhzeit.

Joining him from San Francisco were Mourad Lahlou, chef/owner of the Moroccan restaurant Aziza (one star from Michelin) and Adam Sobel, executive chef of RN74 (a Michael Mina restaurant South of Market). Jewish culinary expert writer and chef Joan Nathan, a few other chefs and some assorted others also went along.

While Lahlou failed to respond to an interview request, he did Instagram and Twitter his way through the trip.

Sobel also regularly tweeted from the road, calling it “the trip of a lifetime.”

Sobel, who grew up Jewish on Long Island, said that he had always wanted to go to Israel, and was thrilled to be asked to participate. He met Solomonov cooking at a charity event some years ago.

A culinary highlight of the trip for him was eating the street food and meeting Shai Seltzer, a legendary Israeli goat cheese maker who raises his own goats in the Judean hills.  “It was probably the best cheese I’ve tasted in my life,” he said.

At the memorial dinner for Solomonov’s brother, Sobel teamed up with another chef and made baby vegetables stuffed with ground lamb topped with labeneh with a caramelized pomegranate sauce.

“We cooked on the 10th day of the trip,” he said, “so we had been going through the markets and seeing what was available, and were inspired by what we saw. We kept coming across baby vegetables everywhere, so that’s how it came together.”

While the chefs had the opportunity to sample Israel’s fine dining scene, as well, Sobel maintained that the street foods — particularly sabich, shwarma and falafel — won out in his mind.

“All the street food was super-outstanding,” he said. “The fine-dining chefs are working really hard, and in a few years Tel Aviv will be a fine-dining capital of the world.”

He added, “Some restaurants are trying a bit too hard, though. They should stop trying to do the molecular side of things and embrace their own Middle Eastern culinary traditions.” 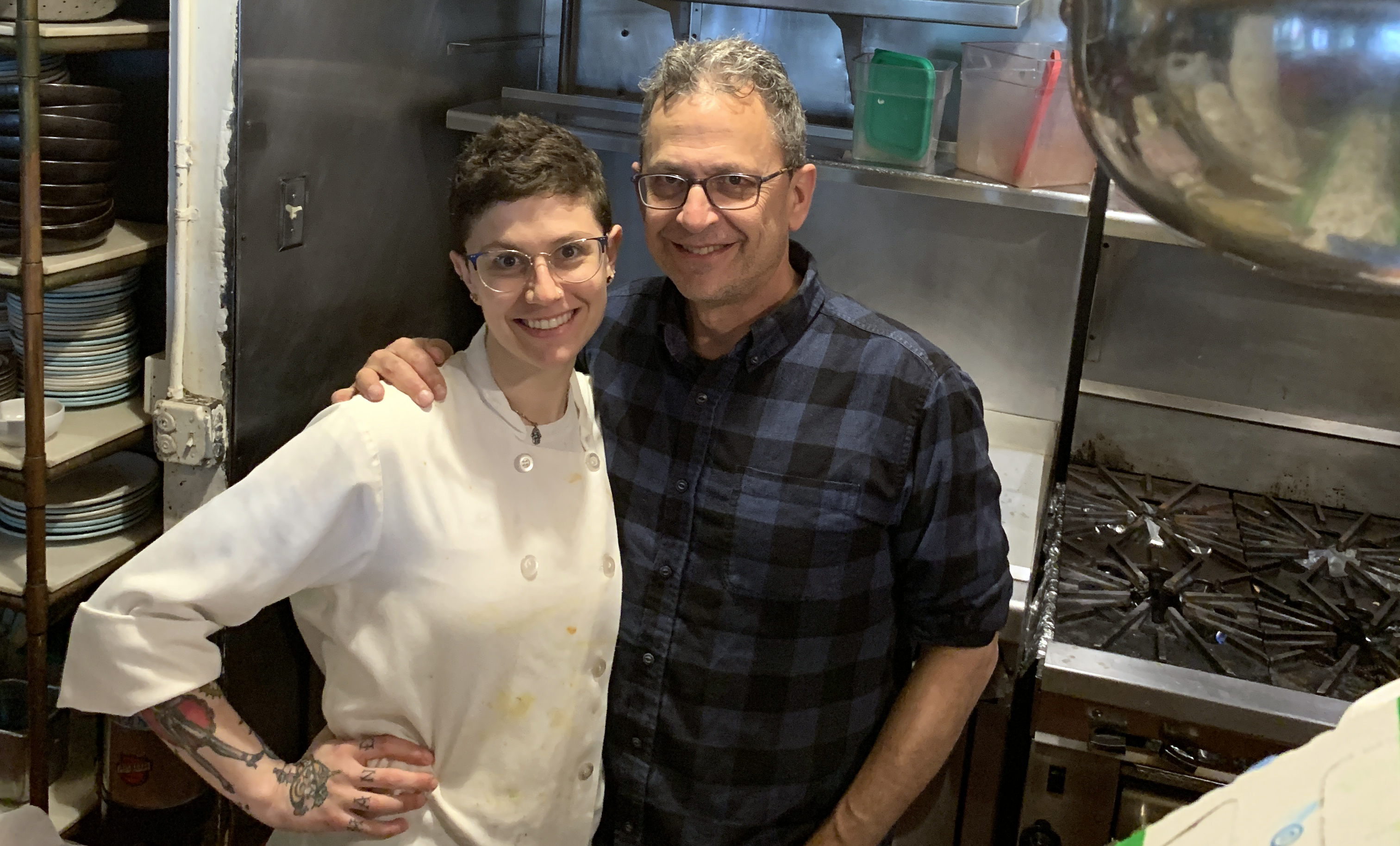