For Alina Adams, figure skating has almost always been in her blood.

The 44-year-old Soviet-born writer, who immigrated to San Francisco with her parents in 1977, is not a skater herself but spent many long hours “learning on the job” as she chaperoned her younger brother, Martin Sivorinovsky, then a competitive skater and ice dancer, to and from different skating events in the Bay Area.

“Because I was eight years older and our parents were always working, I was the one who traveled with him during skating competitions,” Adams said in a phone interview last week. “That’s how I got to know the sport so well.”

After spending years at the ice rink watching the professional skaters, Adams went on to earn her undergraduate and graduate degrees in broadcast communication from San Francisco State University. In 1995, master’s in hand, she landed a job at ABC Sports as a figure skating researcher, gathering and compiling statistics for national and international skating competitions.

The information gathered by researchers is used by announcers to share with the audience which elements of a particular routine are coming up, along with pertinent biographical information on the skaters.

Traveling with news and cable networks to sporting events, including the 1998 Winter Olympics in Nagano, Japan, Adams learned firsthand what TV networks choose to broadcast and what they don’t. She brought her observations to her just-released book, “The Figure Skating Mystery Series (5 books in 1).”

“People don’t realize how much television networks have influenced what viewers are actually seeing,” she said. In fact, it was because of the networks that the “figures” portion of the figure skating competition was removed altogether.

More than two decades ago, skaters would trace figures in the ice in addition to performing a free skate routine. The two scores were then combined.

But Adams says viewers couldn’t understand how a skater who scored higher in the figures portion but lower than fellow competitors in the flashier free skate could still win a medal.

“So the networks decided the ‘figures’ was boring and put pressure on the skating federation, and they decided to drop it,” she said. Figures were eliminated from competition in the ’90-’91 season, replaced by what is now known as the short program.

In addition to researching skating statistics for several networks in the late 1990s and early 2000s, the native Russian speaker would translate for skaters from the former Soviet Union. “Mostly I was behind the scenes, but periodically I would show up in front of the camera, so my parents could see I was alive, and they were happy about that,” Adams said.

As for which skaters American viewers end up seeing on TV, Adams — who did stints at NBC, TNT and ESPN — asserts that the majority are handpicked by producers long before they even take to the ice.

Back when she was working for the networks, “When we would go into a production broadcast, [the producers] would say, ‘What’s our storyline?’ so basically before you’ve even shot the event, before anything has even happened, television has already decided on a story they want to tell,” Adams said.

She cited the extreme example of figure skaters Nancy Kerrigan and Tonya Harding, fierce rivals who were in the media spotlight before the 1994 Olympics in Lillehammer, Norway. When Kerrigan was clubbed in the knee in the weeks leading up to the Games, an attack choreographed by Harding, the national and international attention was intense. “The media certainly pushed [the scandal] along,” Adams said.

In comparison with overseas broadcasts, she said, American networks air only a handful of skaters. “Many television producers believe Americans only want to see Americans,” she said. Foreign networks often broadcast the entire program from start to finish.

Adams left TV work in 2001 and now lives in New York, where she is a full-time writer of novels involving ice skating mysteries. And despite all of the dirty little secrets she knows about the sport, she still loves it.

“I think that what the athletes do is incredible, and one thing you lose when watching skating on television is that you have no idea how quickly the athletes move, whipping around with tiny blades on their feet,” she said.

As the Olympics get started this week in Sochi, Russia, Adams will be watching. She is looking out for three Jewish figure skaters representing the United States: pair skater Simon Shnapir, ice dancer Charlie White and solo skater Jason Brown.

“I will never be jaded about what the athletes are doing: Many of these folks are young and the work is incredible. Am I jaded about the broadcasting aspect and the narrative created around the manipulation? Yes,” she said. 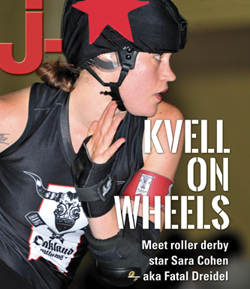