Pulling an all-nighter on Shavuot with cheese

Some Jewish holidays are celebrated by dressing up in costumes or eating meals in makeshift huts, but there’s only one holiday — Shavuot — where it’s popular to stay up all night and study.

And making it all the way through until dawn?

“That’s a mitzvah!” said Rabbi Burt Jacobson, a scholar, teacher and founding rabbi of Kehilla Community Synagogue when it was in Berkeley.

As celebrated in the Bay Area, Tikkun Leil Shavuot is a dusk-to-dawn event that involves eating cheesecake and dairy products, studying Torah and other Jewish texts, and watching the sunrise while reciting morning prayers — at least for the hearty few who can stay up that long.

“As the night goes on, it becomes more for the hardcore,” said Naomi Seidman, director of the Jewish studies program at the Graduate Theological Union in Berkeley. “Fewer people are there, but they are more into it.”

Seidman, unfortunately, can’t count herself among them. A self-proclaimed “night owl,” she used to make it all the way through until the morning, but now she stays “only” until 1 or 2 a.m.

Seidman is one of the many people who attend the East Bay’s Tikkun Leil Shavuot — which literally translates to “rectification for Shavuot night.”

One of many such events in the Bay Area, this one will be held at the JCC of the East Bay starting at 6:15 p.m. on Tuesday, June 3, and going all the way until 7 a.m. the following morning. It brings together people from across the Jewish observance spectrum — from secular teen girls to pious Hassidic men — creating a crowd of 600 to 800 people who normally would not study together.

“It’s like an everything bagel,” said Rabbi Yehuda Ferris of  Chabad of the East Bay. “Some people come on a Harley, others walk. There are almost as many different people as there are political parties in Israel.”

That’s one of the things Seidman loves about this particular event. The native New Yorker has been observing Tikkun Leil Shavuot at the JCC in Berkeley since the early ’90s; in 1996, she began bringing along her 2-week-old son, who is now 17.

“It’s really special because it brings together all segments of the community,” she said. And even with such diversity, peace and harmony are the order of the night. “This would never happen in New York,” she added.

Together, attendees not only delve into Torah and text study, but they talk in the hallways between study sessions, put their vocal chords together to sing nigguns and nosh at long tables full of dairy treats. A portion of the programming is designed for ages 2-12, and there also is free child care and a sleeping room for kids from 8 p.m. until 7 a.m.

Marcia Brooks of El Cerrito looks forward to the JCC East Bay all-nighter every year. “The hardest part of the evening is deciding what class to take,” said Brooks, who was active at the Jewish Renewal community Aquarian Minyan for many years and now runs in several Jewish circles.

Taught by rabbis, educators, various experts and lay people, this year’s classes include studying “powerful female characters of the Talmud,” a sing-along that’s a “musical tour through the holidays” and the reading of poems by Bay Area Jewish poets. Other courses have titles such as “For the Sake of Torah L’shmah,” “Does God Wear Tefillin?” and “Pious Prostitutes Among the Ancestors of King David.” In all, the preliminary schedule lists more than 50 classes, with the list of presenters reading like a who’s who of local Jewish rabbis and educators.

Jacobson, the rabbi who helped found Kehilla, couldn’t recall when the East Bay’s first Tikkun Leil Shavuot occurred, but he knew it was a turning point in East Bay Jewish history.

“It offered an interconnection between the various synagogues in the East Bay,” he said. “It was a sea change, really.” The last of three harvest festivals, Shavuot ends the 49-day period of counting the Omer, which starts at Passover. Observed for one day in Israel but for two days in the diaspora, Shavuot commemorates the giving of the Torah at Mount Sinai, and it is a tradition to study Torah all night.

The kabbalistic ritual, according to Talmud scholar Daniel Matt, a professor of Jewish spirituality at GTU from 1979 to 2000, first appears in the Zohar, a book composed in 13th-century Spain. An ancient midrash says that the Israelites overslept before receiving the Torah at Mt. Sinai. Since God and Moses had to wake them up, it is now customary to stay awake all night studying to make sure that does not happen again.

“In my younger days, I used to stay up all night,” Matt said. “Now I teach or study for a few hours. It requires great stamina, and is good spiritual training.”

Like most Jewish holidays, Shavuot involves food. Tradition calls for a smorgasbord of all things dairy, from wedges of gouda to ice cream buffets to gorgonzola pancakes — and everything in between.

The ritual has a few explanations, but one theory is thought to date back to when the Torah was received. The laws, including that of kashrut (dietary rules), were not known yet. So, without the necessary tools for kosher meat, Jews stuck to dairy.

While munching away can help some people stay awake, it still isn’t very easy to make it through the night, said Rabbi Mordecai Miller of Congregation Beth Ami in Santa Rosa. Last year, his congregation hosted its first Tikkun Leil Shavuot, but only a handful of the 60 attendees made it until morning. Many started leaving at 11 p.m.

“Singing is good and [taking a break] to walk around the block can be helpful,” said Miller. “When you are sitting, it’s easier to drop off.”

At Congregation Beth David in Saratoga, the celebration lasts until midnight, even though Rabbi Daniel Pressman points out that many of his congregants should be well-prepared.

“Here in the Silicon Valley, coders are used to all-nighters,” he said.

The majority of rabbis and leaders of Tikkun Leil Shavuot celebrations in the Bay Area note that the peak hours for the study sessions are between 9 and 11 p.m.

One of the more creative twists is the “Shavuot California Street Corridor Crawl,” an event that, according to the flier, “takes the idea of the pub crawl to new heights.” The event begins with a dinner and programming at 5:30 p.m. at Congregation Sherith Israel, then moves on to the JCC of San Francisco, Emanu-El and Beth Sholom for 10 study sessions.

It concludes at midnight — for most. As the flier says, “Study continues all night for those who are interested.”

Meanwhile, across the bay in Berkeley, Ferris will probably get another capacity crowd for his popular 1 to 2 a.m. stream-of-consciousness talk on all things Yiddishkeit and Torah. And that’s in the JCC’s spacious main auditorium.

Ferris’ trick? Throwing in a heavy dose of humor.

“People are loopy at 1 in the morning,” he said. “I could read the phone book and they could start laughing.”

Rona Teitelman of Berkeley uses her grandmother’s recipe for her family’s Shavuot potluck each year. Teitelman is donor services manager at the Jewish Federation of the East Bay and a Congregation Beth Israel member.

Her grandmother Chaike (anglicized to Ida) was born in Ukraine and immigrated to Connecticut. She was a kosher butcher’s wife and had four sons, the oldest of whom is Teitelman’s father. As Chaike got older, Teitelman’s mother, the cook in the family, observed the blintz-making in progress and recorded the recipe.

Interestingly, Chaike’s recipe has a rice-custard filling made from white rice, milk, eggs, butter and sugar, with no cheese involved. Research about such a filling turned up nothing.

“I have no idea where she got it, but it was probably something they made maybe because they had more rice than cheese back then, but who knows?” said Teitelman.

While Teitelman is happy to eat cheese blintzes, she has come to prefer these. “I think they’re more interesting. I’m not so much of a foodie person, but on Shavuot, this is my thing.” — alix wall

Cook until it has absorbed most of the liquid and turn off the heat. Let sit overnight.
The next day, add to it:
½ stick butter, melted
sugar to taste
3 eggs, beaten

Mix well and stuff into your favorite blintz crepe (Teitelman has started making gluten-free blintzes for friends who can’t have wheat) and fry until golden.

Bored of the same-old blintzes? How about French green lentil soup in a porcini mushroom broth with cardamom and sweet spices, topped with a rich, luscious goat’s milk cheese called Bodacious?

That’s just one dish on a multicourse Shavuot dinner with optional wine pairings on Sunday, June 1 offered by the Sonoma Wine Shop and La Bodega in Sonoma and Sebastopol, showcasing multiple cheeses from Bohemian Creamery, which is owned by Jewish cheesemaker Lisa Gottreich.

The Sebastopol location will also feature music and a petting zoo of cows and goats from 11 a.m. to 6 p.m. This is the sixth year such a Shavuot festival is happening, since the wine and cheese purveyor is co-owned by Israeli native Meekk Shelef and her partner/boyfriend Bryan Cooper.

Shavuot is one of Shelef’s favorite holidays because it’s such a natural tie-in to celebrate local cheesemakers.

Shelef has fond memories visiting her extended family on a kibbutz to celebrate the “First Fruits” festival. “When I first came here, I was shocked that most people didn’t know about it,” she said.

The dinners will be sourced from local farms, and are co-sponsored by Bohemian Creamery and the JCC of Sonoma County. Cost is $29 per person. For information, visit www.sonomawineshop.com.  — alix wall

Getting goaty with it

Urban Adamah is holding a goat cheesemaking workshop from 10 a.m. to 12 p.m. June 8 as part of its family education series. The workshop will include visiting time with the goats, cheesemaking, a bit of study and a meal featuring the cheese made that morning. Participants should be at least 5 years old.

Ariela Ronay-Jinich, senior farm educator and director of Hebrew school on the farm, said that Jewish law has a lot to say about how animals are treated, so she is going to teach a bit about that subject.

Unlike many other varieties of cheese, goat cheese is relatively simple to make, says Ronay-Jinich. “Also, it’s easy to add things to it, so we can look around the farm, and add some culinary herbs.”

Given that dairy is often such a large part of children’s diets, she adds, “I’m hoping that people will come away feeling more connected to where their dairy comes from.”

The workshop is limited to 30 participants and costs $8. To register, visit www.tinyurl.com/adamah-cheesemaking.  — alix wall

Asking Moshe Rosenberg his favorite kind of cheese is like asking him to choose a favorite child.

The professor of dairy science and engineering at U.C. Davis hails from Netanya and became interested in science as an undergraduate at Hebrew University. He obtained his doctorate in food engineering at the Technion, and then was recruited by Tnuva, the largest Israeli cheese manufacturer at that time, to be its chief technical officer. About 25 years ago, he was recruited by U.C. Davis.

A popular course of his is called “Life After Cheddar.”

“In that seminar, I do my best to open the minds and hearts of people to recognize the richness of the world of cheeses,” he says.

He teaches about cheese around the world and has also served as a judge in many international cheese competitions.

“There’s a cheese for every occasion. Some of the best can stink like hell but taste like heaven. Everyone can find something pleasant for their palate.”  — alix wall 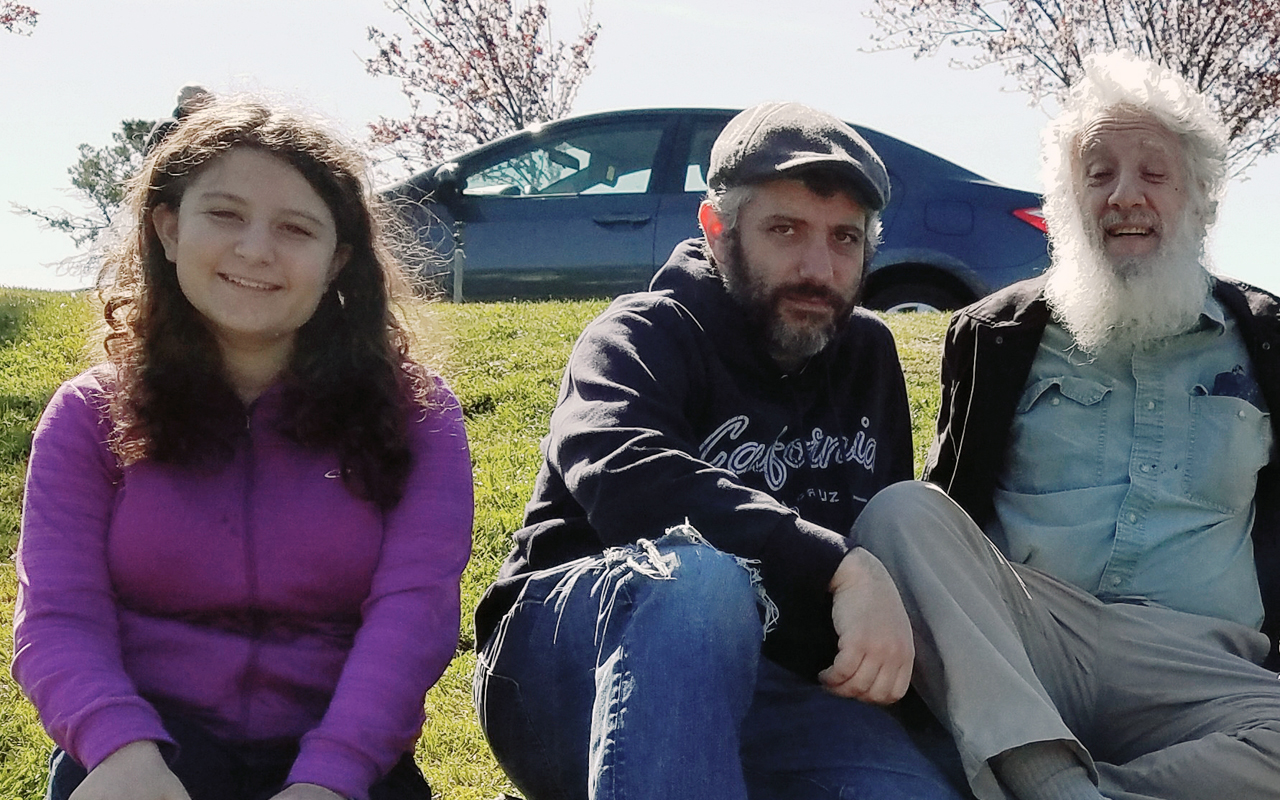