Some topped their creations with sesame or poppy seeds. Others used cinnamon and sugar. The beginners stuck with a traditional three-strand braid — or round, for the Jewish New Year — while the more adventurous tried a six-strand braid or a four-strand round.

It was the Bay Area’s first “Mega Challah Bake,” and about 180 women attended the Sept. 21 event in Piedmont. Chabad of Oakland and Piedmont was the sponsor, and there were seven participating organizations from the East Bay, including Jewish women’s clubs and Jewish day schools.

Veterans Hall in Piedmont was a sea of pink Mega Challah Bake aprons as women and girls mixed and measured, kneaded and braided, and shared tips with each other.

Shulamis Labkowski, co-director of Oakland and Piedmont Chabad with her husband, Rabbi Dovid Labkowski, said she planned the local gathering in preparation for the Jewish New Year. The Chabad event has been a huge hit in other North American cities, drawing, for example, more than 1,000 women in the Toronto area and more than 350 in the Boston area.

“It’s a beautiful show of unity for all sections of the Jewish community to come together, drawing women from all affiliations, mothers and daughters,” she said. “It’s a beautiful way to usher in the New Year by learning about a mitzvah that’s special to women.”

The bakers went through 300 pounds of flour (both regular and gluten-free) and 540 eggs.

To save themselves the trouble of making the municipal facility kosher, the women packed their loaves in foil pans and baked them at home (if the food isn’t heated, the surfaces don’t have to be kashered).

During her opening remarks, Labkowski noted that God gave the Jewish people 613 mitzvot to follow, with three of them specific to women (but this does not mean women are exempt from all the others, she clarified). The three: baking challah, keeping the family purity laws (going to the mikvah) and lighting Shabbat candles.

These three mitzvot, she said, “highlight everything that is sacred and central to Jewish life.”

Labkowski also explained how a bit of dough used to be separated out for the priests in the Temple, but since we don’t have the First or Second Temple anymore, we separate out a small bit to be burned as a sacrifice.

A short video was shown, further elaborating this theme, which also explained that women are encouraged to pray to God while kneading the dough; since they are fulfilling a mitzvah, they are closer to God during that time.

And then, flour and water, sugar and salt, yeast, oil and eggs were mixed together. The women worked in pairs and made a large enough batch of dough for four loaves (two for each of them).

Eliana Bloomfield, 12, of Piedmont, worked with her friend Katherine Mermin, 12, of Berkeley. Mermin said her family makes challah at home sometimes, and this recipe wasn’t that different from the one they used. “Smell that. It’s beautiful,” she said of the yeasty mixture.

At first, Bloomfield was disappointed that sprinkles weren’t available as a topping. However, she perked up when told there were chocolate chips. “Those will do,” she said.

Ella Sadikman of Oakland (left) and Emily Becker of Piedmont

The girls were working next to their friends, Emily Becker, 12, of Piedmont and Ella Sadikman, 12, of Oakland. Their hands got sticky mixing, while Emily’s mother, Lynh Becker, slowly added more flour. Lynh Becker said she didn’t make challah at home, but now that she saw how easy it was, she definitely would.

Kim Hoffman of Oakland came to be “with her mishpocha,” and was excited to make challah for the first time. “I’ve never made it in my life,” she said, “but now that the kids are out of preschool, they don’t make it anymore. I want to give back to them the challah they made in preschool.”

There was a 30-minute break for a nosh and a raffle — and, most importantly, to let the dough rise.

When the women returned, they dropped a nickel that organizers had left at each place setting in a collection cup, as giving tzedakah is always done before saying the blessing over making challah. As the blessing was said, women separated off a piece of the dough to burn later.

Things got more complicated as the shaping began. While Labkowski demonstrated a round challah made with four strands from the stage — projecting by video onto two screens on either side of the room — not everyone could follow her instructions.

Judy Massarano of Berkeley demonstrated a trick for making a round, crown-shaped challah that she learned from an Israeli baker on YouTube.

Whether their uncooked loaves were perfectly shaped or looked like a big lump, what was most important was that people enjoyed themselves.

“It’s so great to see so many women from different communities,” said Karen Cohen Bloom, who, as a member of Oakland Ruach Hadassah, helped host the evening. “It’s a great mix and everyone is having fun.” 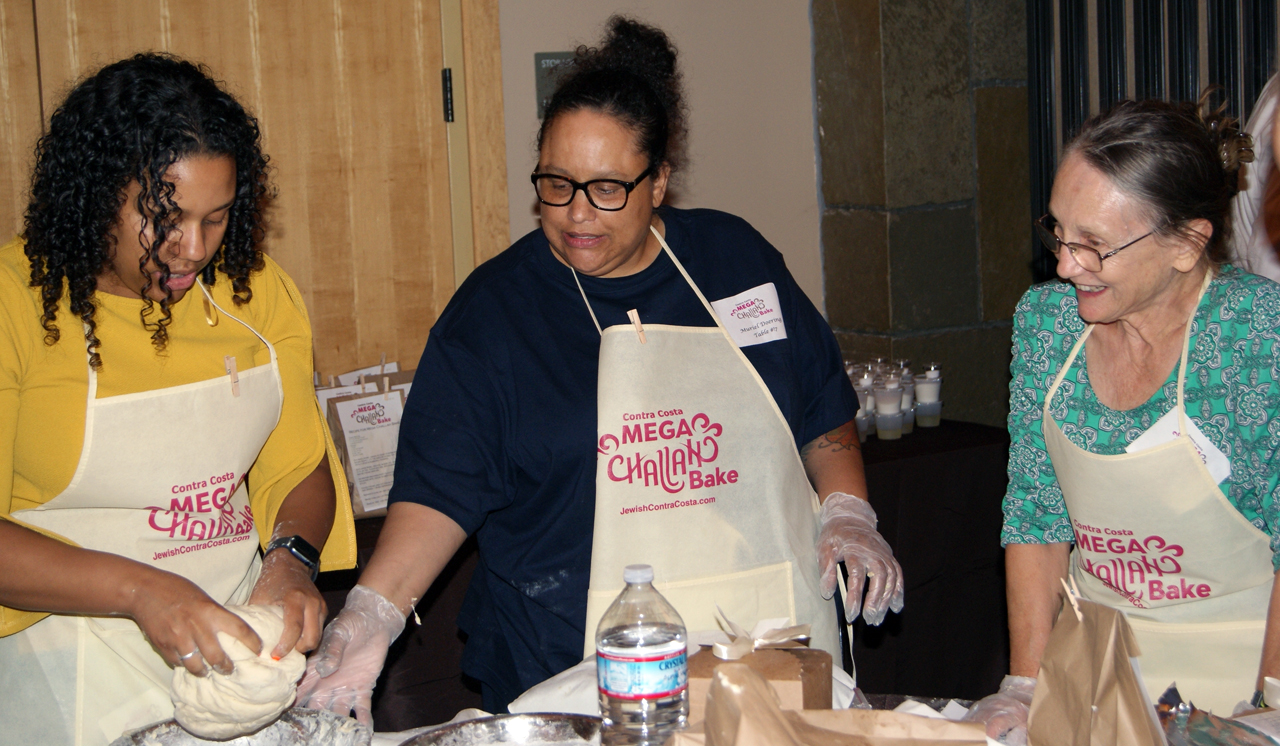 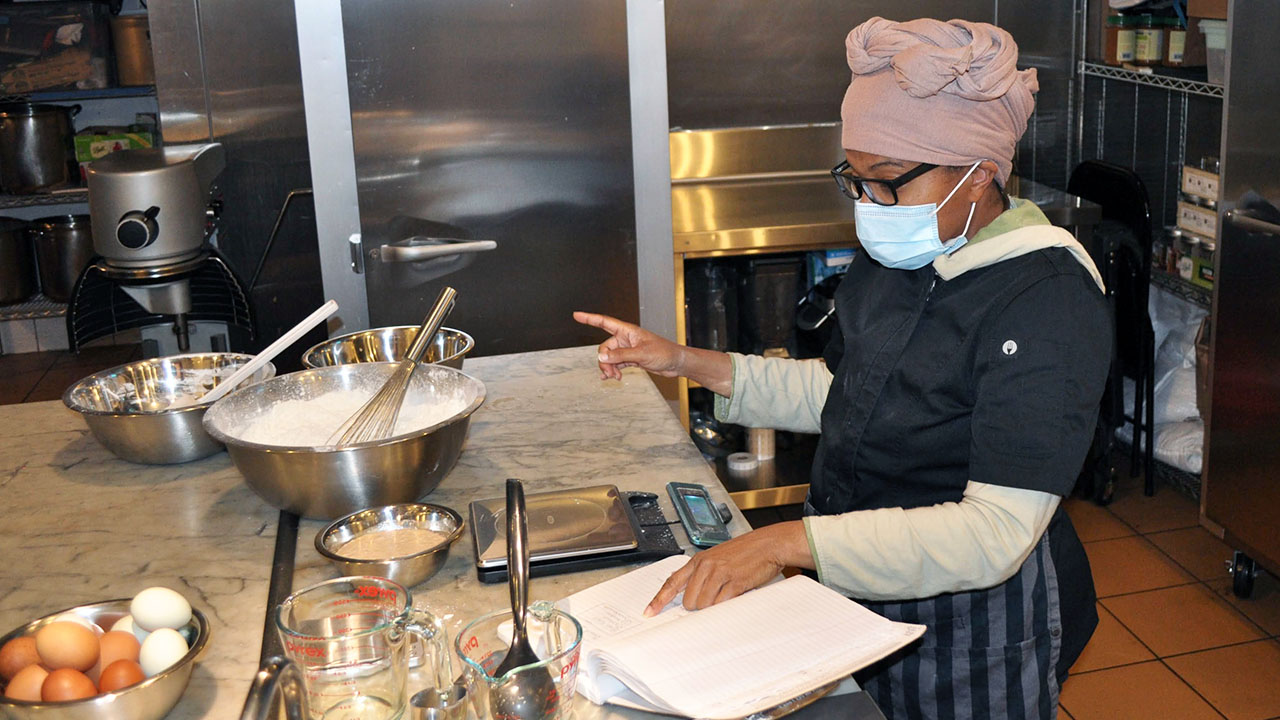