In a legal salvo that has rocked the Bay Area’s Jewish and philanthropic communities, Susan Koret, the lifetime chair of the Koret Foundation and widow of its founder, has filed a lawsuit against longtime Koret president Tad Taube and other members of the Koret board for breach of fiduciary responsibility, demanding their resignation.

Among other things, the suit asks for unspecified compensatory damages from Taube to be paid to the foundation.

In response, Taube and six other board members immediately counter-sued, demanding Susan Koret’s removal from the board. Both lawsuits were filed in San Francisco Superior Court on Oct. 7.

Language in both lawsuits didn’t pull any punches.

Susan Koret’s suit claims Taube, 83, has “autocratically” controlled the Koret Foundation “as a personal piggy bank to aggrandize his name and funnel millions of dollars annually to favored causes” — such as initiatives in his native Poland and politically conservative entities such as Stanford University’s Hoover Institution.

Such grants and causes, the lawsuit claims, were “politically and socially at odds with the core mission of the foundation.”

Koret also accused multiple board members of conflict of interest, citing the fact that several sit on boards and/or serve as officers of institutions and agencies that receive Koret funds, yet vote to grant money to those same institutions. She accused Taube of “stacking the board with directors more loyal to him than to the Foundation’s independent objectives.”

Over the years, the Koret board has included prominent Bay Area Jewish leaders such as Bernard Osher, Richard Blum and Warren Hellman. Current board members named in the lawsuit include Richard Atkinson and Richard Greene, who also serves as Tad Taube’s attorney.

Meanwhile, in the countersuit filed by Taube and the other board members, Susan Koret is referred to as a “dissident board member” unable to “perform the necessary due diligence to exercise sound business judgment.” The suit charges she “engaged in behavior for which she would have been fired from any other organization” and seeks to remove her for “incompetence.”

The lawsuit comes just as Taube is about to step down as Koret president, after serving more than 30 years in the post. Stanford economics professor Michael Boskin and S.F.-based Jewish Family and Children’s Services executive director Anita Friedman, who are set to take over as Koret co-presidents on Nov. 1, are both named as defendants.

Among her charges, Koret claims that Taube and the board have “ignored the priorities established by her late husband to help the poor and assist Jewish causes in the Bay Area and Israel.”

For evidence, she points to the many millions of dollars the foundation steered toward the creation of a new museum in Warsaw, the Museum of the History of Polish Jews, which opens to the public later this month. Poland is Taube’s birthplace, and the museum has been a grand cause of Taube’s — but Susan Koret says monies going to Poland are beyond the mission of the foundation.

In an open letter to the community sent out on Oct. 8, Taube and the seven members of the Koret board (aside from Susan Koret) expressed their “regret” at the filing of this suit. Saying that they are “proud” of the $500 million the foundation has provided to nonprofit organizations, the signatories disputed Susan Koret’s claim that funding was disproportionately funneled toward non-mission aims. “The majority of our funding has been dedicated to supporting the vulnerable and disadvantaged, children, families and the elderly,” the letter states. “Our purpose is and will remain to support Jewish organizations worldwide, and to improve the quality of life for all the residents of the Bay Area community.”

As for the conflict of interest allegations, Koret’s lawsuit castigates board members Boskin and Abraham Sofaer, both of whom are fellows with the Hoover Institution, which has been awarded more than $4 million in Koret grants since 1992. Friedman, likewise, is involved with other institutions, such as JFCS and the Shalom Hartman Institute in Israel, that have received Koret money.

At an Oct. 8 press conference called by Susan Koret and held at the Institute of Aging in San Francisco (a Koret grantee), one of Koret’s lawyers, Robert Bunzel, said it is not unheard of for directors to sit on multiple nonprofit boards that may conflict, but “they are the exception, not the rule. A huge volume of [Koret] grants goes to organizations with directors [from Koret]. There is no abstention, no independent review. The corporate culture created by Mr. Taube fostered a climate where it is the norm.”

Susan Koret at a press conference in San Francisco on Oct. 8 photo/dan pine

Bunzel also decried what he called “a huge diversion in the tens of millions of dollars to causes outside the Koret mission. Tens of millions for Eastern Europe and large grants to conservative policy organizations dedicated to trickle-down economics, contrary to the purpose of the Koret Foundation.”

That mission, according to Susan Koret, was originally limited to helping the needy as well as the Jewish communities of the Bay Area and Israel.

Accompanying materials handed out at the press conference quoted Tad Taube telling NBC Bay Area News that the social problems of hunger and poverty are “bottomless-pit challenges … I don’t think anybody has enough money to make a serious dent.”

According to those same materials, Koret gave more than $4 million to social welfare grantees between 2012 and 2013. That contrasts with $10.6 million given to Poland, the Hoover Institution and “predominantly conservative causes,” according to the materials.

In addition, the suit alleges that Taube’s personal foundation, Taube Philanthropies, “uses money and staff from [Koret] to pay for and enhance joint projects” of the two entities.

Ballard said that Koret “has given $500 million over the last 30 years to nonprofits around the world, focusing on Jewish and Bay Area organizations. The board stands by all of the grants. Susan Koret voted for many of the grants. In fact, she voted with the board 95 percent of the time. She voted for the Hoover Institution. Clearly she either does not understand what she is doing on the board, or she supported the grants she is now suing over.”

Copies of the minutes of Koret board meetings going back to 2010, provided by Ballard, show that Susan Koret voted to approve grants to conservative institutions such as the Federalist Society and the Hoover Institution.

When asked at the press conference why this was so, Susan Koret’s spokesman, Sam Singer, said, “She has always been a peacemaker.”

“[On] the last board, everyone was very supportive,” she said, “and tried to help [Susan] understand the functioning of a board. She has had a hard time fulfilling her duties as a trustee.”

Quoted in a Matier and Ross report in the San Francisco Chronicle this week, Ballard said, “Susan was a housekeeper to Joe Koret and his first wife, Stephanie, and was only married to him for a brief period. Susan is an incompetent director who lacks even a basic understanding of the foundation and its operations.”

At the Oct. 8 press conference, Susan Koret claimed her late husband “wanted to use his money to help the poor. That is not happening. I want to return the Koret Foundation to its original mission.”

Her plan included expanding the board to more than the current eight members and attempting to diversify its ethnic composition.

In June, she nominated Willie Brown, the former California Assembly speaker and ex–San Francisco mayor, for the Koret presidency. According to the lawsuit, Brown was willing to accept the post, calling it in a July 2014 letter “a great honor.” But no one on the board would second the nomination.

This is not the first time Susan Koret has sued Taube and/or the foundation board. The first lawsuit, settled in 1986, obligated independent legal counsel for the foundation and an increased board of directors to “make it more difficult for an individual director or a handful of them to control the board,” as quoted in Susan Koret’s current suit.

In the months leading up to this week’s filing, Friedman said negotiations between the parties were ongoing. “We were hopeful we’d be able to solve the issues she [Koret] had through conversations and mediation,” Friedman said. “We were very dismayed that she decided, instead of continuing, to file a lawsuit.”

Friedman added that her 10 years on the board have been a “very positive experience” with minimal acrimony.

“Only recently has Mrs. Koret decided to move in a different direction,” Friedman said, “and her behavior has really changed.” Ballard said her behavior has become “increasingly confused and erratic” and that “she has brought discord.” 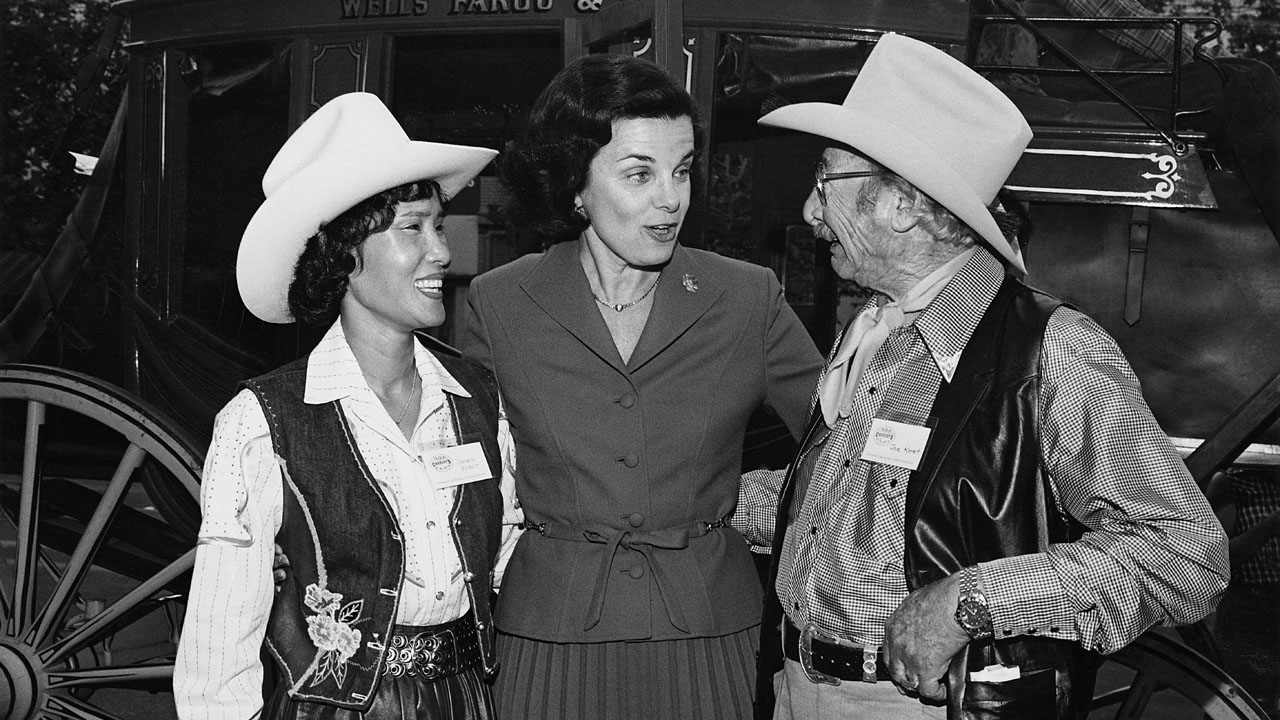