Madeleine Albright has received many distinguished honors in her lifetime. President Bill Clinton appointed her ambassador to the United Nations and the first female secretary of state. President Barack Obama awarded her with the Presidential Medal of Freedom.

But as Albright’s friend Laura Lauder told the audience of more than 500 at the S.F.-based Jewish Community Federation’s fourth annual Day of Philanthropy last week, this storied diplomat, who once earned the nickname “Madame Cojones” during an international incident with Cuba, can now add another honor to her resume: Last month, her face appeared on a Wheaties box.

On that note, Lauder, vice chair of the federation’s endowment committee, kicked off a free-ranging keynote discussion between Albright and her interviewer, radio personality Michael Krasny, at the Oct. 30 luncheon in San Francisco.

“I was raised Catholic, married an Episcopalian and found out I was Jewish,” Albright told Krasny when he pointed out that she was among “her people.” “I’m very proud of that.”

Albright, 77, discovered in her late 50s that her parents had been Jewish and many of her relatives, including her grandparents, died in the Holocaust. The daughter of a diplomat, Albright was born in Czechoslovakia but her family fled the country at the dawn of World War II. Her parents converted to Catholicism and chose not to tell their three children about their heritage.

“I think they were doing anything they could to protect us from something we couldn’t do much about,” said Albright, who was wearing a Lion of Judah pin, indicating support for her local federation. She lives in Washington, D.C. “I’m very proud of my background — all of it. I’m very proud of my parents.”

Albright has plans to travel with her siblings to Terezín, site of the Theresienstadt concentration camp where 26 of her relatives died, to dedicate a plaque in their memory.

Albright said that discovering her background strengthened her already existing commitment to Israel and horror at ethnic cleansing.

“I was ambassador at the U.N. during the ethnic cleansing in Bosnia before I knew my background,” Albright said. “It is part of my genetic background in so many ways that you cannot let people be cleansed and killed for who they are, not what they did.”

The Day of Philanthropy event at San Francisco’s Hotel Nikko brought together financial advisers, business leaders, philanthropists, nonprofit leaders and Jewish professionals around the subject of charitable giving in the Jewish world. The aim is to provide education and catalyze leaders around philanthropy.

In a nod to Game 7 of the World Series the night before, large screens showed clips of the Giants’ victory before the luncheon, and federation interim CEO Jim Offel donned a Giants cap instead of a kippah before saying hamotzi over the meal.

Tom Kasten, the federation’s board chair, noted in his remarks that the agency had distributed $182 million last year through direct grants, donor-advised funds and supporting foundations to organizations that support the Jewish community locally, globally and in Israel.

Nancy and Stephen Grand, major philanthropists in the spheres of technology, medicine and Jewish life, were the luncheon honorees. Nancy Grand was the previous president of the federation’s board of trustees. David Saxe, the federation’s Young Adult Division president, received the Lloyd W. Dinkelspiel Young Leadership Award.

The day’s program, which ran nearly 12 hours, included a tax and estate-planning seminar in the morning. The afternoon consisted of various workshops on philanthropy, estate planning, and global issues in Israel and Ukraine, and concluded with a cocktail reception.

During her talk during the two-hour luncheon, Albright pointed to the agenda of Russian President Vladimir Putin and the conflicts in the Middle East as two foreign policy issues that keep her up at night — “though I have no responsibilities,” she added wryly.

“I have rarely seen anything as complicated or in such disarray as what is happening in the Middle East,” said Albright, who participated in the failed 2000 Camp David summit between Israeli Prime Minister Ehud Barak and Palestinian Authority Chairman Yasser Arafat. “I think the U.S. can have every brilliant idea about ways of solving the problem. Unless the leaders of Israel and the Palestinians want to have an agreement, it’s not going to happen.”

Before she left the stage, Albright made a partisan nod to 2016.

“I do think Hillary Clinton would make a great president,” she said, to applause. 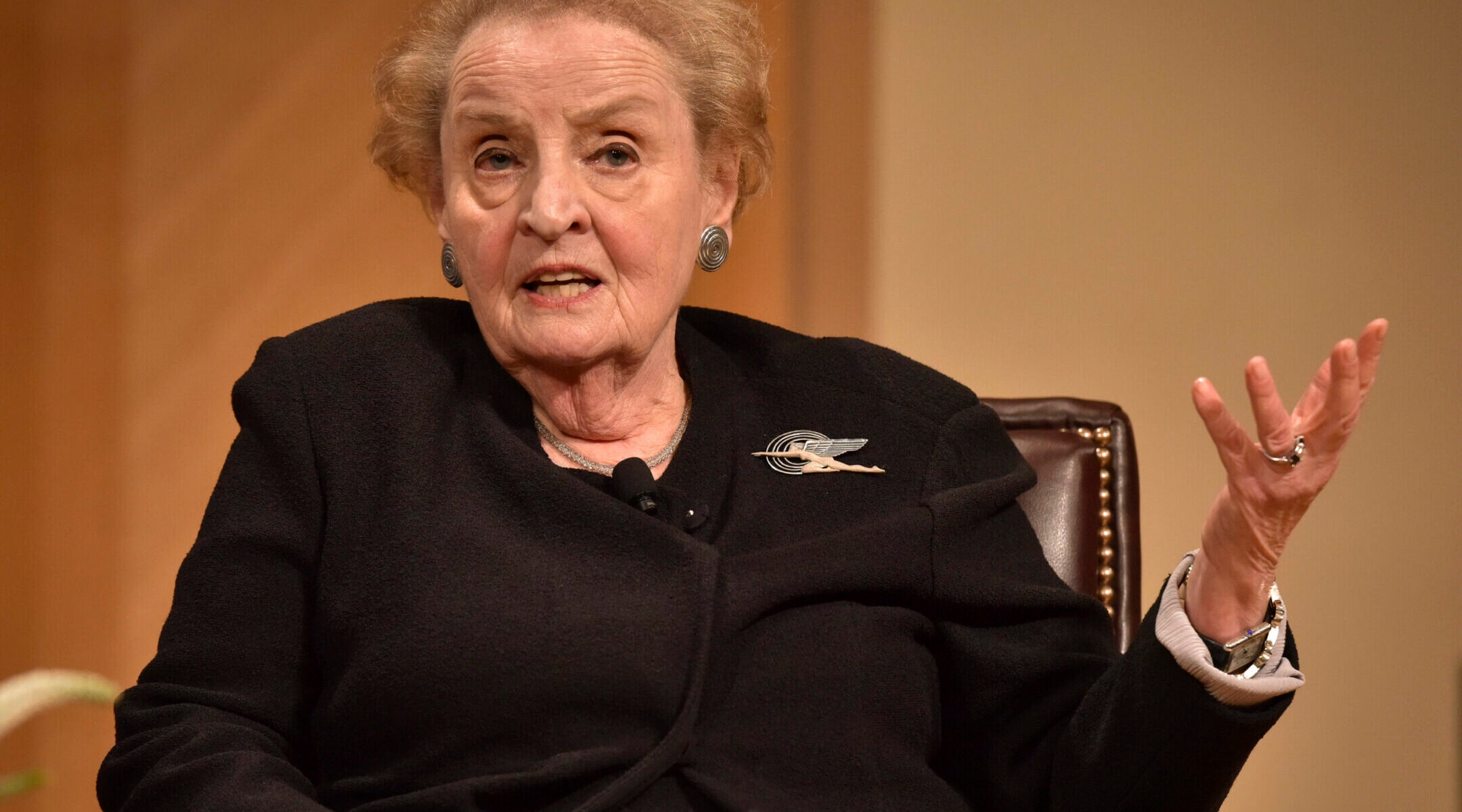