Bruce Bierman and Gilberto Melendez like to say they took their honeymoon after three months of dating, and then got married 20 years later.

They first met in 1992, when both were living in Los Angeles. Bierman, now 49, was performing in a Persian dance troupe for which the Nicaragua-born Melendez (who is older than Bierman and gives his age as “going on 17”) came in to audition.

While they noticed each other that day and talked a bit about Melendez’s love of flamenco dance, Bierman was in a relationship, and no phone numbers were exchanged. But given they were both active members of the dance community, over the course of two years they kept bumping into each other — at the ballet, the opera, the movies. They would talk about whatever they had just seen, and were struck by the fact that the conversations were always engaging — and leaving them wanting more.

Around the time of the Northridge earthquake in January 1994, a lot happened. Bierman lost an aunt with whom he was extremely close, and his romantic relationship fell apart. But he remained friends with his ex, who a few months later invited him to see a dress rehearsal of the opera “El Gato,” starring Placido Domingo.

“I was really depressed,” Bierman recalled.  “So I go, and there are only a few people in the audience, and it was an incredible production.  And this flamenco part comes on, and there is Gilberto on stage with Placido Domingo.”

The opera takes place in Seville, Spain, and during a break, Bierman went to talk to Melendez and asked him to show him some of the dance steps. Soon they were doing flamenco in the aisles of the theater, and soon after that they went on their first date to see a theatrical version of the musical “Fame.”

The show was terrible, Bierman recalled, but the date afterward was not. “We went to a ‘50s diner, had shakes and fries and laughed about how cheesy the production was,” he said. “And began to fall in love.”

On the way to the theater, Bierman told Melendez that he was reading “Don Quixote,” and the next thing you know, they were jokingly planning a trip to Spain. As it turns out, a large flamenco festival that happens every four years was coming up, making it the perfect time to visit. And three months later, their “honeymoon” to Spain began with a stopover in Paris.

In Seville, they found the exact place replicated in the scene from the opera where Bierman had first spotted Melendez performing flamenco. “There was a lot of ‘bashert-ness’ about it,” said Bierman.

On that trip, however, they also learned that their styles of travel differed. Bierman was more of a planner, while Melendez liked to meander, not knowing where he’d end up. At times they’d go on their separate adventures, but “then we couldn’t wait to come back together at the end of the day,” said Melendez.

And thus began their 20-year love story, which included a few breaks along the way, during which both said they realized they truly belonged together — which brings us to Berkeley in 2000.

Bierman and Melendez became known for leading Jewish dance — curious, since before moving here, neither of them knew anything about it.

On the topic of marriage, Bierman said he jokingly asked Melendez to marry him shortly after they returned from Spain, while cooking dinner one night in 1994.

“I never thought of saying them, but they were the most basic words from my kishkes. No one was even talking about gay marriage then, but when I said these words, they came as easily as saying ‘I love you’ to him.”

Melendez’s response was no.

“I come from a different culture where marriage is for somebody else,” Melendez explained. His Catholic upbringing and parents’ divorce left him with a negative view of marriage that he didn’t want for himself.

But over time, as gay unions became more the norm, “My father began asking when we are getting married,” said Bierman, who recently co-founded Open Tent Shul of the Arts in Berkeley. “It gave us a push in the tuchus to do it.”

Added Melendez: “I realized I do want marriage equality for everyone, not just for me, and there’s no imposition that ‘you have to do it this way.’ ”

In 2012, they were in Los Angeles on business and found themselves in front of the fountain at the Dorothy Chandler Pavilion — “which had been sort of our synagogue,” said Bierman, adding that it was where the fateful “El Gato” opera had been held.

They married on June 29 — the fact that it was Pride Day was complete coincidence, the couple say — at New Carpati Farm in Sebastopol. (Selena Polston, who lives on the farm with husband Steve Schwartz and their children, is a college friend of Bierman’s.)

Though Melendez has never converted, he says he was drawn to Judaism even before he met Bierman, and feels as if he might have some Sephardic blood somewhere. “Many people who came to the area of Central America, where I’m from, came from Andalusia,” he said.

Their celebration began when both grooms danced onto the farm property from the street, with Bierman wearing a ruffled purple tuxedo shirt with a light blue tailcoat, and Melendez wearing a black flamenco jacket. Guests gathered round while the couple danced in the center of the crowd, after which guests sat down to a potluck feast.

Both men then changed into long Indian silk tunics with embroidered necklines, with Bierman in white and Melendez in mauve.

Rabbi Lynn Gottlieb led the ketubah signing, with a ketubah she made herself. “Your marriage is an act of creation,” she said, adding, “How blessed are we to be celebrating the marriage of two men on pride day.”

After the ketubah was signed, musicians — given the couple’s omnipresence in Jewish music circles, numerous musicians from the Bay Area’s Jewish music scene were in attendance and playing throughout — led guests on a procession around the property.

The ceremony began at dusk, with roosters crowing in the background. Lior Tsarfaty, an Israeli-born Bay Area musician and music teacher, officiated, noting that “this is the first wedding where you don’t have to make everyone dance.”

When the couple circled each other seven times, they did so in a dance position, holding each other around the waist with one arm, and joining hands with the other arm aloft.

For the seven blessings, the couple invited people from seven communities important to them to speak: Naomi Newman, founder of A Traveling Jewish Theatre, represented their mentors; Yiddish singer Heather Klein represented their musician friends; others represented their queer, theater and Israel/Palestine peace-activist circles.

Since neither wear rings, the men exchanged jewelry: a chai necklace for Melendez and a bracelet with “Ani l’dodi v’dodi li” (I am my beloved’s and my beloved is mine) for Bierman.

When the glass was broken, Tsarfaty called for the walls of ignorance to break down, so everyone who wished to marry would have the right to do so.

The grooms changed again after the ceremony, with Bierman in a rainbow satin disco-ish jacket, and Melendez in a colorful patchwork Western ranchero shirt.

Given their backgrounds, Bierman was very excited by the idea of the wedding as a theatrical event, so they asked their friends  David Rosenfeld and Joti Levy to be “badchans” (traditional Jewish jesters) throughout the evening. Rosenfeld wore clown makeup as he served as master of ceremonies, while Levy changed outfits numerous times, switching between a long blond wig and an afro.

Later, guests entertained the grooms, and the music switched between klezmer and salsa, with a flamenco guitarist ending the evening. 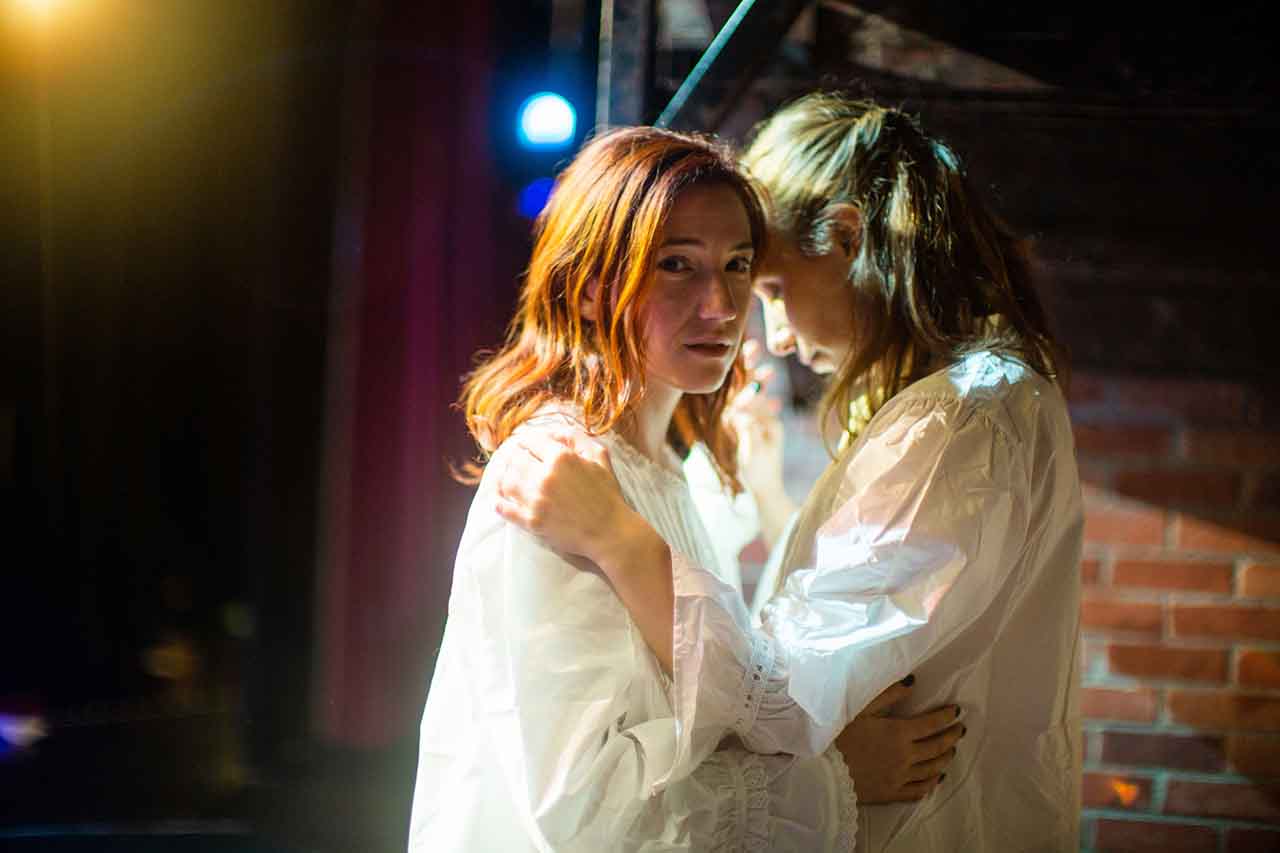