The space between | Gate is not a fence, but a passage to people and ideas

David Avidor might not be a household name, but chances are your house is full of him. As the lead package designer for Klutz publications for more than a decade, he transformed works like “Klutz Book of Inventions” and the Scoubidou craft extravaganza into artworks — a joy to behold, and a joy to hold.

An Israeli-born graduate of the California College of the Arts, the 43-year-old Walnut Creek resident recently left Klutz when it moved most of its operations to New York. Full of projects and ideas, Avidor soon turned his attention from how people open books to how they open gates. And his first gate is now “open” — the new passageway into the Temple Beth Abraham courtyard.

“When you think about it, the word for gate in Hebrew, sha’ar, and the word for lesson, shi’ur, share the same root,” Avidor said on a sunny morning as preschool children wandered around the Oakland congregation. “Learning is about opening something up for somebody educationally. And a gate is about opening up the space to them literally.”

The letters are composed in reflective stainless steel, with the idea that the “you” in the blessing comes to the fore. “Who does the blessing here?” Avidor asks. “It’s not the building, or the institution as a whole. It’s the people. Those who come and those who leave should see themselves in the place.”

The gate is a powerful symbol in Jewish life. During the final hour of Yom Kippur we acknowledge the “closing of the gates” for penitence; the mystics talk about ascending through “gates of understanding”; even the Reform movement’s prayerbook is called “Gates of Prayer.”

Avidor, a kind of artist-philosopher of the designed Jewish experience, draws on this rich symbolic heritage in his door sculpture. But he wants to push the idea even further, understanding the gate as — well, a gate into understanding the Jewish condition today.

David Avidor and the gate he designed for Temple Beth Abraham

While he was growing up on a moshav in the rural Galilee, the gates between inside and outside were fairly open, as were the gates between Jewish and Arab residents. The presence of gates and walls and fences is of course a key issue dividing Jews and Palestinians, and Avidor — without wading into politics — noted simply that the ancient gates surrounding the Old City of Jerusalem were designed both for protection and as a gathering place for all peoples.

The Temple Beth Abraham gate, like all gates, “must find the balance between protection and access. … Here we have a synagogue named for Abraham, whose tent was open on all four sides, so that everyone would feel welcome. Yet we feel it necessary to create a gate with both access code and a surveillance camera.” This delicate balance is the DNA of gates.

“A gate is not a fence,” he explains. While traditional Jews often advocate “building a fence round the Torah,” so that its essential laws and rituals aren’t violated, no one has elevated the building of a gate to the same level.

The gate is not a passive place of transit, but a moment of ritual, an experience of transition. For instance, Avidor explains that the word “mezuzah” doesn’t literally mean the encased Hebrew scroll nailed to the doorpost, but the doorpost itself. The passage of Hebrew we look up to when we cross a threshold must be connected to the passage of people from one space into another.

Avidor connects the idea of entryway, the open space connecting inside to outside, to what typography designers call “negative space.” He is especially influenced by the 20th-century type designer Adrian Frutiger, whose goal was “designing the open space, the white space. The black of the letters would fill itself in around that.”

Married with three kids, Avidor sent his children to the Temple Beth Abraham preschool. Understanding the institution from the inside was critical to creating the gate to the outside. “Fundamentally, design tells the story of what happens inside,” whether that is a book, a museum installation or a synagogue.

Just like a book doesn’t work unless it is opened, an institution cannot function unless it allows people in. And the gate, as symbol and passageway, is the calling card for the business inside.

“The connection of gate to lesson, of sha’ar to shi’ur, is even deeper when you think about someone walking through your doors,” looking to learn, or to belong. “We can create a gate made of gold and diamonds. But if we can’t open the door, if we can’t get you to come through it, nothing can happen.” 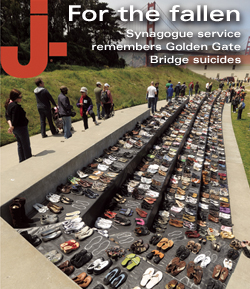