Kids to parents: Unplug and talk to me

Ten-year-old Sophia Cannon decided she’d had it. Her family was too distracted by cellphones. So she put her foot down.

First at bowling night, then during a family hike, then at her most recent birthday party, she banned the use of cellphones for anything but taking pictures. Everyone went along with it, and the results showed: They talked to each other more and texted less.

And their bowling scores improved, too.

“We were getting more strikes because our phones were down,” said Sophia, a fourth-grader at Franklin Elementary School in Burlingame.

Though stories abound in the media about young kids hooked on Facebook and texting, and teenagers who barely look up from their devices to interact, increasingly it is children who complain about smartphones interfering with family life.

Parents distracted by an incoming email — or those who stop what they’re doing at the ping of a text message or are constantly looking at Facebook — are checked out and unavailable, their children say.

Experts warn that smartphones are even changing the way our brains work, conditioning us to constant stimulation and making it more difficult to unwind or focus deeply on tasks.

In the face of this relentless onslaught of digital noise, the trend of unplugging is becoming more popular.

Inns and resorts in remote areas advertise the fact that they don’t have Internet access. Awaken Café in downtown Oakland recently announced it would turn off its Wi-Fi four days a week to encourage face-to-face connection. Digital Detox, an organization that promotes tech-free events, offers off-the-grid retreats for corporations and holds a summer camp for adults where no cellphone or Internet access is allowed.

Jewish tradition, of course, offers a built-in way to unplug every week: Shabbat.

But while Friday night dinner is a tradition for many Jewish families, most American Jews don’t observe a strictly traditional Shabbat where work is prohibited, including use of computers and cellphones.

Now, many Jews who readily drive, cook and turn on the lights on the Sabbath are looking to the tradition of Shabbat for lessons on how to balance the modern reality of being plugged in with opportunities for connection and slowing down.

Reboot, an organization that develops new approaches to Jewish traditions, started the National Day of Unplugging in 2010 as a way to bring the spirit of Shabbat to a wider audience.

One partner is the San Francisco Recreation and Parks Department, which, in conjunction with the city’s school district, is promoting the slate of activities offered on March 7 as part of the National Day of Unplugging.

Though she’s not Jewish, Sophia became inspired to ask her family to turn off their cellphones after she spent an afternoon at the JCC of San Francisco. The Jan. 31 event, Saturdays Unplugged, was open to families of all faiths and featured live music and activities for kids and drinks for adults.

Shannon Casey and daughter Sophia Cannon enjoy a hike at Mori Point in Pacifica. They put their phones in airplane mode and used them only for taking photos.

“People traditionally think of Shabbat as candles and challah and wine, but we really open the doors and say there’s more to Shabbat than just that,” said Sara Linden, community programs coordinator at the JCCSF. “The main focus is around sharing delight and spending time together — and being unplugged.”

Schevitz was at the recent Saturdays Unplugged helping kids make cellphone “sleeping bags” out of fabric. When Sophia’s dad, who lives in Hong Kong, came for a recent visit, she asked him to put his phone into the bag so they could spend quality time together.

“He’ll put the phone in the cellphone sleeping bag, and I will not let him use it for one hour,” Sophia said. “It’s me-and-him time … We’ll have a race, who can build the biggest Lego castle, we’ll throw a football back and forth, play soccer.”

Another father accompanying his daughter as she made a cellphone sleeping bag asked her, “Who is Mommy’s best friend?” She looked up and said, “Her phone.”

Tiffany Shlain, a Mill Valley filmmaker and member of the Reboot network, turned off her digital devices for Shabbat during the first National Day of Unplugging five years ago. She liked it so much that her family decided to adopt unplugging as a regular practice: Every week they observe what they call “technology Shabbat” where Shlain, her husband and two children turn off their screens.

“It’s really our favorite day of the week … We go outside quicker, we read more, we do art projects,” Shlain said. “Technologies speed up your sense of time: When you unplug, your day feels so long. What’s the day you want to feel long? It’s Saturday, your day off.”

Shlain, who founded the Webby Awards, makes films about creativity and technology. She says that unplugging allows the mind to wander and make connections that it doesn’t make in a tech-focused state.

“I really find I daydream more on my technology Shabbats,” Shlain said. “You’re basically taking a trip in your own mind.”

But it can be hard to start an unplugging practice when it runs contrary to social expectation.

Suzannah Neufeld, a psychotherapist who lives in Berkeley, decided with her husband to rethink their Shabbat observance when their oldest daughter was a year old. They call their practice Internet Shabbat. While they don’t check email or Facebook or look up random things online, they will use their phones for driving directions or to keep in touch with friends and family.

“It’s hard to [put down your tech devices] when nobody else does it. When you’re not shomer Shabbos, it’s hard to get people to take it seriously,” said Neufeld, noting that there’s no way to set an “away message” to alert people you won’t be checking text messages for a day.

One can argue that parents have always been distracted. Many people have memories of their parents sending them outside so they could make dinner or telling them to hush while they talked on the phone.

But having a smartphone that’s always in your pocket and goes with you everywhere creates a whole new level of parental distraction, according to Catherine Steiner-Adair, a clinical psychologist who wrote “The Big Disconnect: Protecting Childhood and Family Relationships in the Digital Age.”

“We’ve developed a new normative behavior,” she said. “You can be talking to your child or your husband or wife, and at the sound of a ping you turn your attention away to something else and you ask that person whom you love to stand frozen in time.”

Children develop “relational fatigue” from always having to fight for their parents’ attention, Steiner-Adair said. “The effects are kids start to feel that they don’t matter as much to their parents.”

Schevitz said that when she spoke to a class of eighth-graders in San Francisco last year about the National Day of Unplugging, they complained that their parents regularly ignore them when they try to talk to them.

“[My dad] will be on his email or on Facebook and there is just a big silence when I say something,” a student told Schevitz. “I just get angry.” Another student said when she tries to talk to her mom, often “she’s on her phone and she doesn’t even look up.”

“When we’re absorbed in email or text, we lose our awareness of where we are and who’s around us,” Steiner-Adair said. “Parents are more likely to be curt or annoyed when texting versus when they’re putting the dishes away.”

Rabbi Judy Shanks at Temple Isaiah in Lafayette was poignantly reminded of how smartphones can get in the way of communication during a recent prayer service she led for kids and their parents. When one child mentioned seeing blossoms outside that no one else had noticed because they were on their phones, Shanks asked the group what else people might miss when they’re absorbed in technology. A child, sitting next to his mom, answered.

“‘We might miss what our child says to us,’” the boy said.

“There was complete silence in the room,” Shanks said. “Several people very quietly put their phones in their pockets because they even have phones out during this prayer service.”

Steiner-Adair advises parents to establish set times to put their phones away.

“The brain needs to rest,” she said. “It’s not healthy to be in front of screens hour after hour. We have to learn how to cope with relationships, with our inner selves, our psyches and our souls.”

Shanks, who recently wrote a commentary relating a portion of Exodus to unplugging, says she worries that people miss out on too much due to smartphones.

“I think it’s an issue that keeps people from feeling a sense of awe when they’re walking around or a sense of connection with another person,” Shanks said.

The National Day of Unplugging is designed to bring the spirit of Shabbat to both Jews and non-Jews. But by encouraging people to reconsider Shabbat observance through the lens of unplugging, does it lead to greater engagement with Jewish traditions? Or does the unplugging emphasis eclipse other important elements of Shabbat?

Rabbi Joey Felsen, founder and executive director of the (Orthodox ) Jewish Study Network, said he would applaud someone who chose to unplug for Shabbat — conditionally.

“I would say, ‘That’s great. Maybe you want to look at that as a start,’ ” Felsen said. “People used to say [observing] Shabbat was impossible; now we have people saying, ‘I’m so envious that you have Shabbat.’ ”

“Shabbat happens to be this built-in mechanism that allows us the space to take a step back, to pause and to focus on other things that we don’t intentionally neglect but that we’re often not as mindful of during the week,” said Rabbi Corey Helfand of Peninsula Sinai Congregation in Foster City, a Conservative shul that is promoting participation in the National Day of Unplugging.

“It is supposed to be a God-like activity where we’re mimicking what God does,” Helfand continued. “There’s this idea that God creates the world and that Shabbat is this opportunity to be reflective, appreciate and recognize the act of creation.”

For her part, Neufeld said her family’s Internet Shabbats allow them to connect more closely with nature and with God in a meaningful way.

For local information on the National Day of Unplugging, see www.nationaldayofunplugging.com/events. 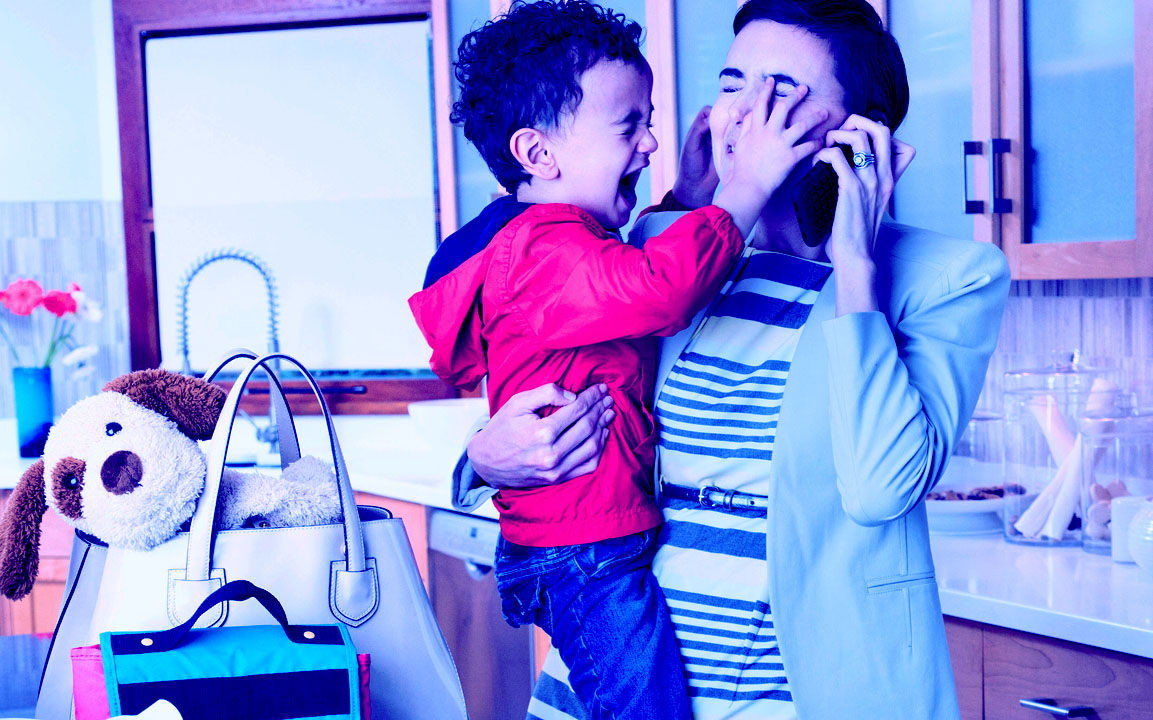