With 5776 underway and Yom Kippur’s heavy task of introspection at hand, I continued my High Holy Day shul-hopping last week. You might recall my five Rosh Hashanah hops, a mixed bag of San Francisco’s diverse offerings, from the Sept. 18 issue of J. For Yom Kippur, I made three stops, all in San Francisco: a “historically LGBTQ” synagogue, the largest congregation in the city and an energetically independent community.

I had wanted to visit Congregation Sha’ar Zahav since 2009, ever since it published its enormous, purple Siddur Sha’ar Zahav, an LGBTQ prayerbook for every occasion. It’s the rare local Jewish community whose firm sense of mission and unique history are manifest in a comprehensive set of local traditions, many of them apparent in the liturgy of their various homegrown prayerbooks.

Walking into Kol Nidre, I was immediately irked by a swaying, arms-around-your-neighbors-yes-even-­if-they’re­­­­-strangers ­rendition of “Hinei Ma Tov.” But I got over my initial irk when I read in the commentary of the pamphlet-y Kol Nidre prayerbook (itself an adaptation of the new Reform machzor, Mishkan HaNefesh), “In the early days of Sha’ar Zahav, the world was a less friendly place for LGBTQ people,” so this practice was instituted so every person begins every service with a loving embrace.

For me, forced physical greetings are always uncomfortable — but OK, I get it. And the text of “Hinei Mah Tov” was modified, too: in addition to shevet achim gam yachad (brothers dwelling together as one) we inserted achayot (sisters) and kulanu (everyone).

Though these touches of LGBTQ history and issues came up throughout, this was otherwise a rather typical Reform service of today. The people here don’t look any different from the crowd of middle-age couples and families one expects at any Reform synagogue. I guess that’s what they call “mainstreaming.”

The Kol Nidre prayer itself began with the soulful cello intro whose inclusion is something akin to law in the Reform movement. There were responsive readings in English — usually a snooze-fest, but this is a congregation that responds heartily. Reminding me greatly of my time in the Reform youth world, some congregants rose for the Shema, others sat — and about 15 percent looked around for a split-second in confusion.

The music was a typical Reform mashup of the more operatic High Holy Day tunes, camp-style sing-songy melodies that go well with guitar (though here it was piano) and points in between. The volunteer choir was unobtrusive, sometimes augmenting or leading, while rare instances of performance were tasteful; once to bring us out of the personal Amidah and back into the communal service, for example. The congregation is great at singing along, and they did so willingly. Most even gamely tried to keep up when the music was less familiar.

Cantor Sharon Bernstein and musical co-leader Jonathan Funk made a terrific singing duo, harmonizing beautifully, rarely digressing into musical territory the congregation couldn’t follow them into. When both of them and the congregation sang in unison at full tilt, the effect was wonderful.

A rabbi friend back East recently told me of her jealousy of The Kitchen. How are their services so fresh and engaging? My answer: Rabbi Noa Kushner. Of course, she doesn’t do it alone. For example, executive director Yoav Schlesinger doubled as leader of the traditionally chanted portions of the service, a notoriously intense duty on Yom Kippur. But it’s really about the tone set by Kushner’s gentle, quietly exuberant style.

Many rabbis sprinkle the service with off-the-cuff remarks about the themes of the service. Most seem a little awkward doing it, as if they need to apologize for doing so or make up for the interruption by squeezing in little jokes worthy of a small chuckle from the crowd. Kushner’s remarks are less self-conscious.

Early on in the morning, she helpfully exhorted us to keep from worrying about what we look like to others while we pray. If you’re thinking about that, there’s no way you’re present in the way Yom Kippur demands you to be — for me, the perfect message.

Sermons were blessedly absent. At The Kitchen, informally delivered, rigorously conceived divrei Torah were the order of the day. Kushner does not ask us on Yom Kippur to turn outward and consider important world issues. No politics. Rather, she turns us inward. The homiletic emphasis here is on doing the difficult work of Yom Kippur.

The crowd is heavy on the 20s and 30s adults, singles and couples, with kids and without — but all age groups are present to some extent. Numbers varied throughout the day, but at the peak at least 200 filled the pews of The Kitchen’s Yom Kippur home, Calvary Presbyterian Church in Pacific Heights. They usually sing along well, though many seem relatively awkward with the lengthier, traditionally chanted passages. Liturgically, The Kitchen does not shy away from these passages, or musically from this traditional style.

Their unique machzor is amazing, the only one I’ve ever been inclined to describe as bright and refreshing. Overall, the slim, colorful paperback is lovely, despite a dose of typos. Bonus points for this clever touch: Open it one way and it’s a Rosh Hashanah machzor, then flip it upside down and over and it’s Yom Kippur. Usually, the photos or artwork many contemporary prayerbooks include do nothing for me, but I liked some of the foldout black-and-white photos in “The Kitchen Machzor 2.0”: a wide overhead shot of a jostling crowd, an image of deep space.

This community embraces the tension between the two contradictory, even paradoxical, moods at Yom Kippur’s heart: the oppressive weight of overly-harsh self-judgment and the exuberant, slightly unhinged laughing-through-our-tears that comes at the end of an ordeal that leaves us emotionally wrecked. Most synagogues can only manage the oppressive weight; the exuberance eludes them. The Kitchen managed both.

I attended the second of Congregation Emanu-El’s two morning services, the contemporary service, which didn’t start until 11:45 a.m. and was over within two hours.

First impression: Wow. This is a very big room, and there are a lot of Jews in here. With extra space for increased High Holy Day capacity, the sanctuary seats about 1,700. It took me mouth-gaping minutes to process the sight. I briefly looked for a seat on the ground floor, but I ended up sitting in the highest Himalayan peak of the rear balcony; there, the full scope of the space hit me. This massive sanctuary is stern, imperious, overbearing. The multilevel bimah with its green marble pillars and staircases is remarkable, like an ancient temple.

This service had all the drama of the most dramatic Reform Yom Kippur service — but more singing along than I expected, and many instruments, including guitar, violin, mandolin and a deeply resonant djembe hand drum used to great effect. The range of musical choices was similar to Sha’ar Zahav, a contemporary Reform grab-bag.

There was a peppy hakafah (Torah procession), remarkably thorough; even in the stratospheric reaches of the balcony, clergy bounced around with Torahs making sure everybody got a chance to touch one.

The crowd was quite multi-age. As they filed out, some discussed Rabbi Ryan Bauer’s excellent sermon on the current refugee crisis, which proudly trumpeted the congregation’s historical role mobilizing the community to help German Jewish refugees in the 1930s.

I spent the remainder of the day at The Kitchen, where I allowed myself to slip out of my writing self and do some of the work of Yom Kippur — the “heavy lifting,” as Kushner put it a few times.

Yom Kippur closes with the Neilah service. It is our last chance. At The Kitchen, we were made to feel that great weight. The lights had been dimmed at the beginning of the afternoon service, but this final service was conducted in virtual darkness, all the lights off.

The majority of us stood for all of Neilah, crowded and bunched up together at the front of the room, people standing on the bimah, at its foot, on the stairs up to it, as close to the open ark as possible. A few little kids milled about the aisles with fluorescent glow bracelets and necklaces.

The voice of Schlesinger, the executive director, was stretched to its max, breaking here and there. We strained in the ambient light to see the words — as if they still mattered at this point. Despite the desperation obvious in all, there was yet some flicker of exuberance at the tail end. And that final tekiah gedolah — a shriek of relief. 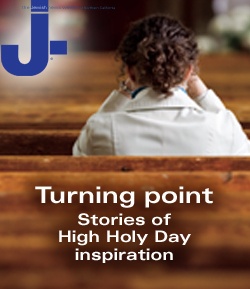