Sukkot is a seven-day riot of delightfully tactile harvest rituals. Its two most known observances — the building and use of the sukkah as a temporary dining room and the shaking of the lulav and etrog — give Sukkot a distinctive physicality; it engages the full body, which makes Sukkot a favorite of many.

But there are a couple other Sukkot rituals, less well known and unlike anything else on the Jewish calendar — and, like so much of Sukkot, all about making it rain. This year I witnessed an adaptation of the arcane Simchat Beit HaShoeivah water-drawing ceremony in Berkeley and, at a Russian-language synagogue in San Francisco, took part in the willow-beating spectacle that takes place on the holiday’s final morning.

A lively crowd turned out for Urban Adamah’s “Party in the Sukkah: Adults Only.” Though there were some older adults, most were independent-minded 20/30-somethings. They were a hip, if offbeat and mildly crunchy group. No mere vapid singles event, there was actual Jewish content, as well.

It was a beautiful Sukkot evening at the Jewish educational farm — a windy, autumnal sunset. We snacked, drank and shmoozed in and around the Urban Adamah sukkah, which had a trendily DIY, tribal aesthetic. (I’m not knocking it; it appeals to me just as much as it does to my 20s-30s peers.) For sitting, there were wooden benches, bales of hay, low floor cushions at tables made of fabric-draped milk crates. Oriental-style rugs covered much of the floor, while breezy, eclectically patterned fabrics made up the walls. Strings of bistro lights and house lamps provided mood lighting. There was a lulav and etrog in the sukkah, though I saw no one use them.

In between the noshing and shmoozing, many sat in the sukkah and committed themselves earnestly, for at least a few minutes, to an art-and-text-study activity run by the Jewish Studio Project. We were encouraged to pair off and choose from a number of themed texts (joy, liberation, etc.) to discuss. Then people drew images inspired by their discussion to hang as sukkah decorations.

I selected a text about ancestors. The handout asked my partner and I which Jewish ancestors we would invite into the sukkah. “Leonard Nimoy,” I said.

As darkness settled, Urban Adamah’s Zachary Friedman gathered everyone around a campfire for singing (and marshmallows). Friedman is a jovial, easygoing leader on the guitar, very much the camp song leader. In his intro, he called Urban Adamah “an urban farm rooted in the Jewish tradition” and noted that all its produce is given away for free — social and environmental values that resonate with this crowd, engaged progressive Jews of my generation.

Then, the ritual portion of the evening. What Friedman called a “water-drawing ceremony” turned out to be disappointingly brief, given how few had likely witnessed it before. It was based on the ecstatic Simchat Beit HaShoeivah (Celebration at the Place of Water-Drawing), described in the Talmud as part of Second Temple-period Sukkot, in which water was drawn from a well and paraded up into the Temple.

A basin of water had been placed before the campfire, in the middle of the singing crowd. “Think of something you want to draw into your life,” Friedman said. “Aside from rain. We all really want rain.” The crowd took him up on his invitation to clap and cheer as a single glass pitcher of water was drawn from the basin and held aloft, before being poured out on the nearest bed of crops.

Simchat Beit HaShoeivah has been reinterpreted and enacted in different ways by contemporary Jewish spiritual groups. Though I was glad to see one such adaptation myself, I was left wishing we had learned more about it and that more of us could have taken part in it.

Hoshanah Rabah, the seventh and final day of Sukkot, brings us one final ritualized effort at precipitating some precipitation: We beat bundles of willow branches on the ground. Lucky me, I decided to spend the morning in San Francisco’s Richmond District with the Russian-speaking Chabadniks of United Schneerson Synagogue, where the willow-thrashing is wonderfully vigorous.

A large plywood sukkah extended just off the sidewalk and into the street. To enter the synagogue, I passed under the sukkah’s tarp-flap entry, past a grizzly kippah-clad fellow who appeared to be on bouncer duty. Once inside, I was out of my depth. Between the typically chaotic style of the service and the language barrier, I spent as much time following along as being lost. The hyper-Ashkenazi style of pronouncing the Hebrew, often distorting vowels beyond recognition, didn’t help either. But Rabbi Bentzion Pil paid me close attention, periodically calling out a page number in English or checking to see if I was lost.

Hoshanah Rabah (“The Great Supplication”), coming as it does amid so much other mandatory shul-going, attracts a small crowd, the most stout of heart. With my arrival, there were a dozen present, a talkative group that did a lot of milling around. The rabbi orchestrated and kept a watchful eye on things, which regularly spun a little out of his control. A younger man in typical Chabad garb led the service, a mostly mumbled affair, everyone moving at his own pace and volume; he shouted the occasional line to catch everyone up. There were a couple younger men, the rest somewhere between middle-aged and quite elderly.

There was a women’s section in the back, though no women were in it. The small room was set up like a yeshiva, to function as both prayer room and study room, with stuffed bookcases fanning out from the ark in either direction. Seating was at a few long folding tables.

People became more talkative as the service went on, a particular group of three earning more than a few shushes from the rabbi. Eventually they took to stepping out into the sukkah to chat. Twice the rabbi went out and dragged them back as we approached prayers requiring a full minyan. But all present engaged in this Russian-language joking around and carrying on at some point; often, one would catch my eye and grin mischievously.

Before the thrashing, there are the hoshanot, seven circuits around the bimah reading psalms, shaking the arba’a minim (four species, aka lulav and etrog). Between us, we had only four sets, so the rabbi kindly passed me his remarkably girthy lulav — truly among the most handsome I’ve seen — and large, smooth-skinned etrog. I was lost as to the procedure, but an old man mercifully rescued me three circuits in by demanding the lulav and etrog for his own use.

The main event: From the sukkah, somebody brought in a bundle of loose willow branches. Then, in a last-ditch attempt at extracting some rain from the parched Sukkot skies, we beat them on the floor. Picture this: 11 men line up to take a few branches in hand, then bend down on one knee and whack them on the floor five times each, as hard as they can, leaving debris and leaves strewn about the carpeted floor. I caught schoolboy grins on every single face, mine included. 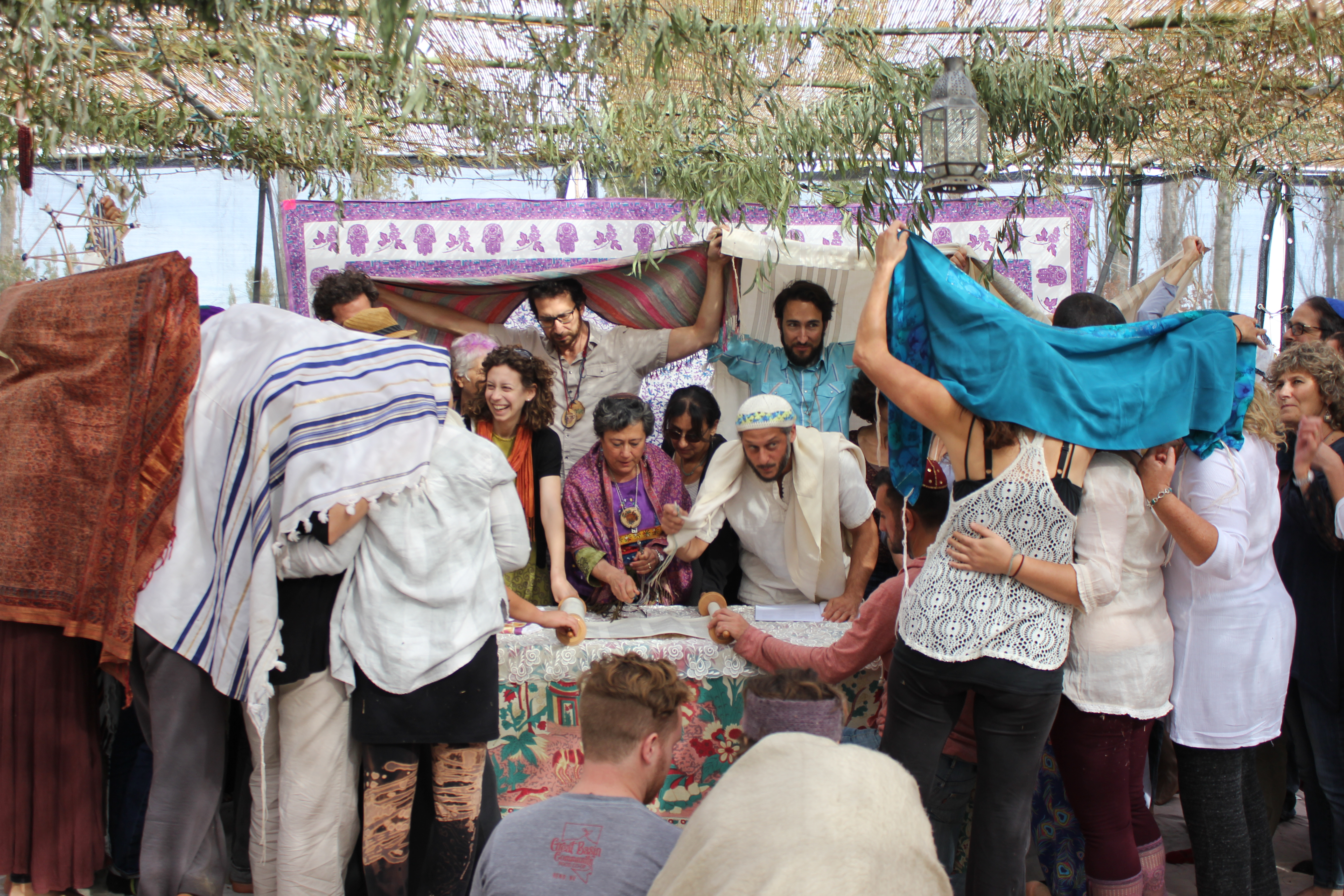