Jamie Mithi, a law student in South Africa, was taken aback when a group of South African students aligned with the anti-Israel boycott, divestment and sanctions movement stormed the stage at the University of Witwatersrand in 2014 and disrupted a campus recital by Israeli-born German pianist Yossi Rashef.

Even though many black South Africans supported the action, which occurred during Israel Apartheid Week and led Rashef to abandon his performance, Mithi was not one of them. He felt it was a violation of free speech.

“I put it on my Facebook and went to the gym, and five hours later there were like 500 [mostly angry] comments,” Mithi told students at the Hillel house in Davis, where he spoke March 29 alongside a seemingly unlikely partner: one of the activists who protested Rashef’s appearance.

Jamie Mithi at U.C. Davis Hillel house, where he defended Israel against charges of apartheid

Klaas Mokgomole, also a student at the time, was among the 50 or so protesters who disrupted the event, prompting campus security to hustle Rashef away from the scene. Some of the protesters apparently believed that the Israeli government had sponsored the recital, scheduling it as a rebuke of Israel Apartheid Week.

However, Mokgomole has since had a change of heart. He is now an outspoken critic of the BDS movement and bristles when Israel is compared to South Africa during the apartheid era.

“I’m deprived because of things that happened during apartheid,” Mokgomole told the audience at U.C. Davis. A member of the youth wing of the African National Congress, he spoke with a thick accent that he blamed on the subpar education received by many black South Africans.

“I’m here to reclaim my story, our narrative. We believe that organizations like BDS are abusing the word ‘apartheid,’ abusing our story.”

Mokgomole was part of a U.S. speaking tour sponsored by the pro-Israel group StandWithUs in partnership with South Africa-Israel Forum. Branded “Reclaiming My Story,” the tour has been featuring black South Africans defending Israel against charges of apartheid.

“It irritates us that the apartheid analogy is used,” Benji Shulman, a white South African who accompanied the tour, told the audience in Davis. “I think it annoys all sorts of Jewish communities around the world, but the difference with the South African Jewish community is that [our country] invented the thing.”

Shulman said that black Africans like Mithi and Mokgomole — who defend Israel against accusations of apartheid — are effective advocates against the claim because they and their families personally suffered under the racist policies of the South African government.

Mokgomole reversed his stand on Israel after he was among the 11 protesters disciplined by university officials for disrupting the recital. At that point, he started looking more closely at the Israel-Palestinian conflict, and he found out there was a lot he needed to learn.

“I’m actually on a campus where views must be debated and discussed, so why don’t I allow myself to be challenged by the other side,” Mokgomole recalled thinking.

He reached out to a pro-Israel South African group for materials and eventually went on a sponsored trip to Israel and the West Bank. That trip solidified his anti-BDS stance, and later in 2015 he had a piece headlined “Know how to grow. What is BDS hiding?” in the Durban-based Sunday Tribune.

Mokgomole’s article sparked a backlash in leftist South African circles. After a pro-BDS South African website reporter misrepresented an interview he did with her, implying, among other things, that Mokgomole did not speak to any opponents of Israeli policies during his visit to the region, Mokgomole wrote a correction he says was never published. He noted that he spoke to many Palestinians, from business people to street vendors, and was in fact surprised that they did not know about the BDS campaign. “They actually had better solutions to the conflict,” he wrote in his correction. “They favored a two-state solution, something BDS is not pushing at all.

“There are problems in Israel and Palestine, and the problems need solutions. We will never get solutions if the media keeps spreading wrong information to the public. The story should not be one-sided, as BDS presents it, but should cover all [sides].”

Before his talk at U.C. Davis, Mokgomole spent time in the quad wearing a hat with a South African flag taped to the side. He talked to about two dozen students, he said, noting that only a handful had “any clue” about the Israel-Palestinian conflict.

“We are pushing for people to do independent research,” Mokgomole told J. “Don’t just allow yourself to be fed. Go out there to find information.”

While Mokgomole’s speaking partner Mithi is also a product of student politics at Witwatersrand, unlike Mokgomole he never supported BDS. A top competitive debater, Mithi also quickly dismissed the apartheid analogy once he looked into the conflict. “Zionism is not any different than any other nationalism,” Mithi told J.

At Witwatersrand, Mithi helped create an independent party to run in student elections. The slate included many Jewish students who were able to fight off slander from anti-Israel activists, Mithi said.

“For the first time, you had this space where Jewish students could run for student government,” he said, and not be subjected to “the whole ‘boycott them because they’re Jews or Zionists’ thing.”

Noa Raman, Pacific Northwest campus coordinator for StandWithUs, said both Mithi and Mokgomole show that there is lively debate in South Africa about the apartheid analogy being applied to Israel. “They are a great example of going outside the box and seeing what life is like in Israel,” she said.

They also show that the claim “Israel is an apartheid state” by no means has universal support among South Africans, added Shulman. 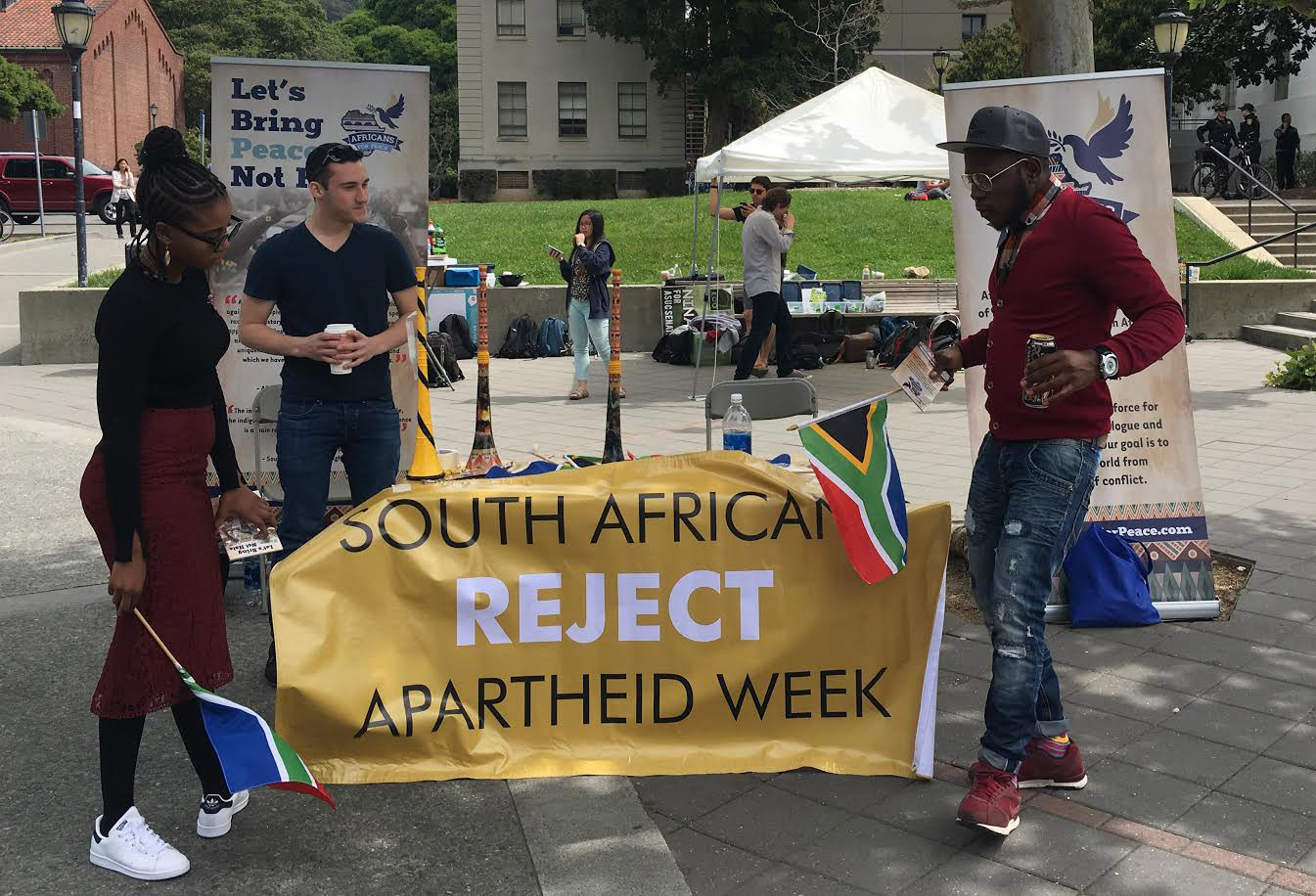