A Passover card game and other outside-the-box seders

On the Wednesday before Passover, members of Mt. Diablo Unitarian Universalist Church in Walnut Creek gathered for a seder. Even if most of the attendees weren’t Jewish, it was a recognizable seder, complete with matzah ball soup (classic, vegetarian and vegan varieties), four cups of wine — and 80 Unitarians gamely trying to sing “Dayenu.”

Church seders take place all the time; many are scheduled around Easter, relying upon the notion that the Last Supper was a seder (still a common belief even among Jews, this tale has been discredited by academics, which I first learned from Larry Hoffman’s indispensible “My People’s Passover Haggadah”). In most cases, church seders are cultural appropriation as best.

So why is this church seder different from all others? Because the Unitarian Universalist Church is different from all other churches. Embracing humanistic teachings of all religions and people of all backgrounds, UU doctrine does not include belief in a specific (or any) deity and counts many Muslims, Buddhists and Jews as members. It is not uncommon for interfaith families to end up at Unitarian churches, as well as Jews alienated from organized Judaism. There is even a group within the UU church called Unitarian Universalists for Jewish Awareness.

Though Mt. Diablo Minister Leslie Takahashi functioned as master of ceremonies, Jewish members of the congregation led the seder itself, ensuring it was truly a Jewish seder — one that just happened to have a lot of Unitarians in attendance.

This seder has been going on for five years now, initiated by a Jewish member who wanted to celebrate Passover with her chosen community. It grows every year, a popular event judging by the healthy attendance I witnessed.

In many ways, it closely resembled large community seders at Reform synagogues: child-friendly, casual, with communal singing of both traditional tunes and charming contemporary schlock like the (in)famous “Frog Song” (“one morning when Pharaoh woke in his bed, there were frogs on his head and frogs in his bed,” etc.).

The seder plate included, not surprisingly for this group, an orange, representing inclusion of LGBTQ Jews. The leaders even observed the contemporary custom of first perpetuating the apocryphal origin story of the orange (“a woman belongs on the bimah like an orange belongs on the seder plate”), then correcting it with the real story (Jewish feminist Susannah Heschel created the custom as a symbol of the fruitfulness for all Jews when LGBTQ Jews are included in communal life).

This Unitarian Universalist seder in Walnut Creek is in its fifth year. photos/david a.m. wilensky

There was also a beet on the plate, a traditional vegetarian replacement for the lamb shank, the red juice symbolizing the blood of the sacrifice. That said, the beets at this seder where white. And although the name of the photocopied internet haggadah in use was “Oranges and Olives,” there was no olive (a symbol of Middle East peace).

The old African American spiritual “Go Down Moses” is common at large Jewish communal seders. It was especially apt in this more ecumenical setting.

Many in this overwhelmingly non-Jewish crowd took part enthusiastically but carefully, with a slight hesitation. While we Jews feel free to relax and have a good time at a seder because it is unquestionably ours to relax and have a good time with, that is not always so when non-Jews join us in marking the same ritual. Many at this seder treated it is a solemn affair, not wanting to overstep or offend.

Sitting near me was a Jewish family with a young kid; an older non-Jewish gentleman who recently had been injured when he was thrown from a horse; and Polina, a Jewish immigrant from Russia who is a regular at the church but just can’t bring herself to join.

An hour and fifteen minutes in, we were eating an eclectic potluck that included ham and noodles. As we milled around and lined up to get food, we were told about a petition to get a criminal justice reform act on the November ballot in California. A commitment to social justice is a major common point for Jews and Unitarians.

At first, I was a little dismayed to hear the Last Supper legend repeated at this seder. But then I thought about how tales of shared history are often created to make two disparate groups feel closer to each other. Though in Christian settings it’s used as an excuse to co-opt Jewish practices, perhaps in this Unitarian Universalist setting it’s a harmless, useful myth.

The day before, I attended what was billed as a “Guerrilla Street Theater Seder.” Staged by San Francisco’s Congregation Emanu-El in Justin Herman Plaza during the lunchtime rush, this experiment consisted of Rabbis Jonathan Singer and Sydney Mintz and a couple others sitting around a small folding table singing “Dayenu,” “Avadim Hayinu” and “Mah Nishtanah” in a repeating loop, interspersed with extemporaneous discussions of Passover themes.

During the half-hour I was there, no one else stopped to watch. Two people handing out Emanu-El Passover information cards got quizzical looks from passersby.

Citing the congregation’s long history (founded in 1850), Mintz told me, “We can’t go with the adage of ‘It’s how we’ve always done it.’ We have to try new things.” She’ll get no argument from me, though I can’t help thinking it would have benefitted from more thorough planning. By the time I left, they were enthusiastically discussing how to do it better next year.

On the first night of Passover, my mother and I hosted a seder at my apartment to try out The Kitchen Passover Game, which is both a haggadah and a cooperative storytelling card game. (The game was created by The Kitchen, a Jewish community in S.F. to which I belong.)

The Kitchen Passover Game is both a haggadah and an interactive activity.

Here’s how it works: The 75-card deck is divvied up evenly among the participants. The person with card 1 (candlelighting) begins the seder. Whoever has card 2 (the first cup of wine) goes next, and so on, according to the order of the seder.

There are two other kind of cards: conversation cards and action cards, both of which can be played at any time. Conversation cards have prompts for discussion of Passover themes. One titled “wine” included a quote from Song of Songs (“As wine enlivens the heart, so do words of the Torah”), a suggested activity (“Take a sip of your wine, and describe it with your most flowery language, as a New York Times Wine Critic would”) and the following prompt: “Share a time where you did something under the influence of alcohol that you either regret, or don’t regret in the slightest.” That led us to some revealing stories.

The action cards are purely for fun. One might play “Drink” at any time, forcing everyone to take a drink. “Stretch” is good too, instructing everyone to get up and shake it out and/or take a dance break.

First we tried the game with six people, but we enjoyed it so much that we used it again on the second night with a crowd of 12. It worked just as well with both groups. In both cases, it was about two hours before the meal began, but we indulged in lengthy conversation-card digressions.

The game also looks great. The cards are laid out with slick, inviting graphic design.

I truly recommend it. Though we didn’t have kids at either seder, I imagine it would work pretty well with children too.

Jew in the Pew is a regular feature. Send tips about religious, ritual and spiritual goings-on to david@jweekly.com. 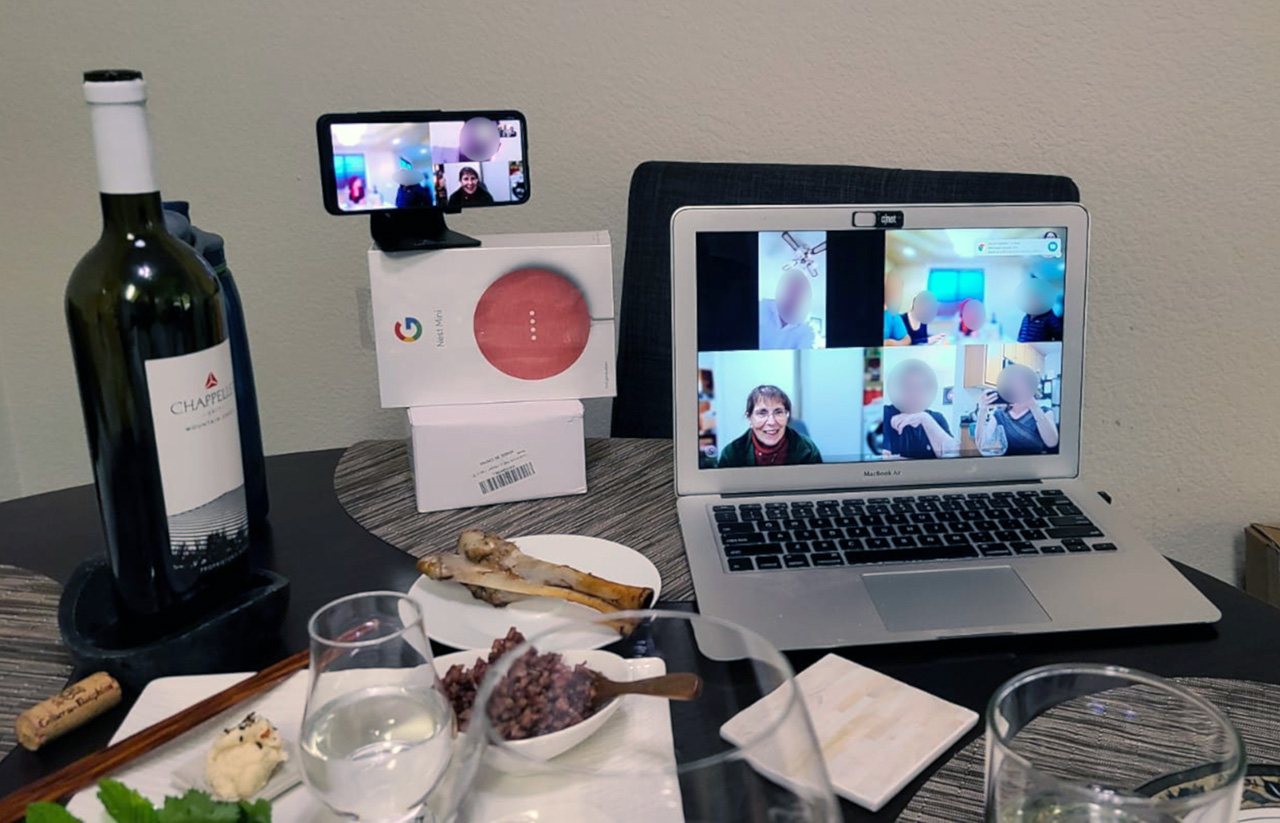 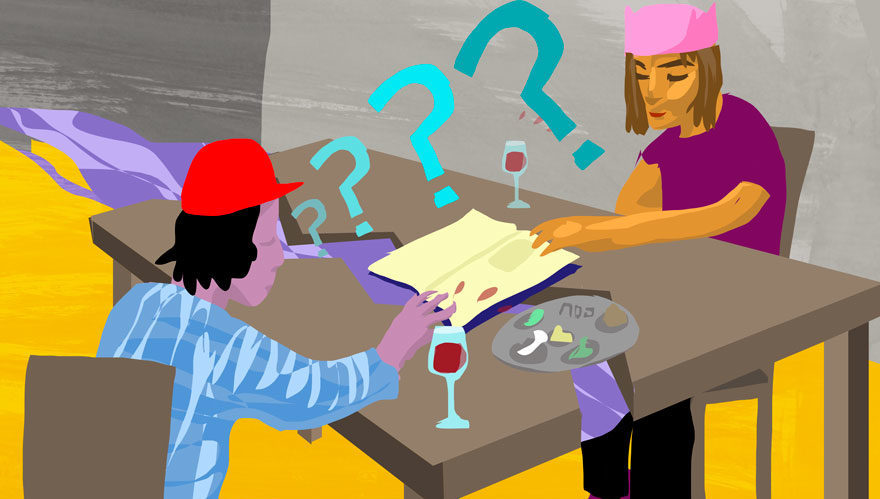