Settling into a recliner in her parents’ family room, Nomi Solwren experiences a wardrobe malfunction. The fabric on her mermaid tail shifts and reveals the cardboard underneath. Nomi is wearing the costume just for fun, but the subject under discussion is serious: her bat mitzvah.

The big day is June 4, at Temple Isaiah in Lafayette, a day that the Solwren family will be grateful to see, for when Nomi was 10, a rare and difficult-to-treat form of leukemia almost killed her.

Nomi Solwren will have her bat mitzvah in June.

After enduring an initial diagnosis and treatment that were incorrect, several serious setbacks during the proper treatment and a bone marrow transplant from her sister — without which her system would have been unable to recover from the intensity of chemotherapy — Nomi survived. With physical therapy, she has learned to walk again.

Even when wearing a mermaid tail.

Listening to this girl with the infectious grin, sparkling eyes and playful spirit, no one would ever guess what’s she been through, or just how much it means to her to be a lead dancer this spring in the show “James and the Giant Peach” at Orinda Intermediate School, where Nomi is in seventh grade.

“What I went through was sucky,” Nomi says. “I felt really sick. I couldn’t go to school, and I was isolated a lot. The medications disintegrated part of my stomach, and I lost my hair. It was depressing. But now that’s all done, and I feel good.”

Nomi, 13, lives in El Sobrante with her parents, Deena and Daniel Solwren, and her sister, Maya, who is in ninth grade at Miramonte High School. Daniel is a middle school science teacher who works with at-risk students. Deena is a psychotherapist. She closed her practice in 2014 when Nomi got sick and is now rebuilding it, specializing in helping parents whose children are diagnosed with cancer.

“All of 2014 was a nightmare for us, a terrible time,” Deena said. “So many people stepped forward to support us — family, friends, people from Nomi’s school, people at Temple Isaiah — especially the Angel Network there. It was amazing. And now we’ve all come back to life, back to normal. We’re on cloud nine.”

The day after Nomi’s bat mitzvah, family and friends will celebrate with her at the Benicia Yacht Club, a party with an ocean theme. No surprise there. But because party planner Adam Goldstein is keeping mum, everything else about the party is a secret — except that it will cost the family nothing.

Goldstein, who lives in Pleasanton, is a co-owner of Gatsby Entertainment, along with Maxwell Alegria and Jason Mitchell. “I’ve been in the entertainment business since I was 12,” said Goldstein, 33. “My dad, Frank Goldstein, was known as the ‘Mitzvah King’ and was the longtime bandleader for [Bay Area party band] Manhattan Towers.”

The Solwrens met Goldstein two years ago at a vendors’ showcase at Temple Isaiah. “We were looking for people to help us with [older sister] Maya’s bat mitzvah party, and we really liked Adam,” Deena said. “But because Nomi was so sick, I had to tell Adam exactly why I couldn’t sign a contract with a firm date, and he was a sweetheart about it.”

Goldstein, who said that in his work he has always embraced the Jewish tradition of giving back, decided to bump up Maya’s bat mitzvah party from a base package to something nicer, at no extra cost.

Around that same time, he also got the idea to start Simcha Wish Granters, a coalition of party specialists that help put on simchas for families dealing with cancer.

“We’ve sponsored events at temples and worked on parties before, but Nomi’s party is going to be a really cool event,” he said. “When I approached the people who are part of the Simcha Wish Granters, everybody wanted to help.”

“Everybody“ includes the Simcha Sisters, event planners based in Walnut Creek; Blueprint Studios, event designers in South San Francisco; Flowers by Edgar, a florist in San Jose; Cheryl Bigman Photography out of San Ramon; and Culinary Eye Catering and Events, based in San Francisco. Shana Goldberg, a co-owner with Tanya Shore of the Simcha Sisters, is the chair of Simcha Wish Granters.

Maya’s bat mitzvah was held Jan. 10, 2015, a day that her mother says was one of the best days of her life, a day filled with joy. Tears of gratitude played a part in that joy.

“Maya’s d’var Torah was about offering to be the donor for Nomi’s bone marrow transplant,” Deena said. “Maya was crying. Nomi was crying. It was very moving for many people.”

That’s likely to be the case again on June 4, when Nomi stands on the bimah and talks about her leukemia, a cancer that starts in blood stem cells. The next night, when Goldstein and his team reveal all the party surprises, Nomi will celebrate with family and friends, each thrilled to be at such a momentous event.

An hour after the mermaid tail slippage, the interview is over. Nomi pulls herself out of that cozy chair, adjusts her costume and hops down the hall to call her Hebrew tutor. No malfunctions of any sort impede her journey. 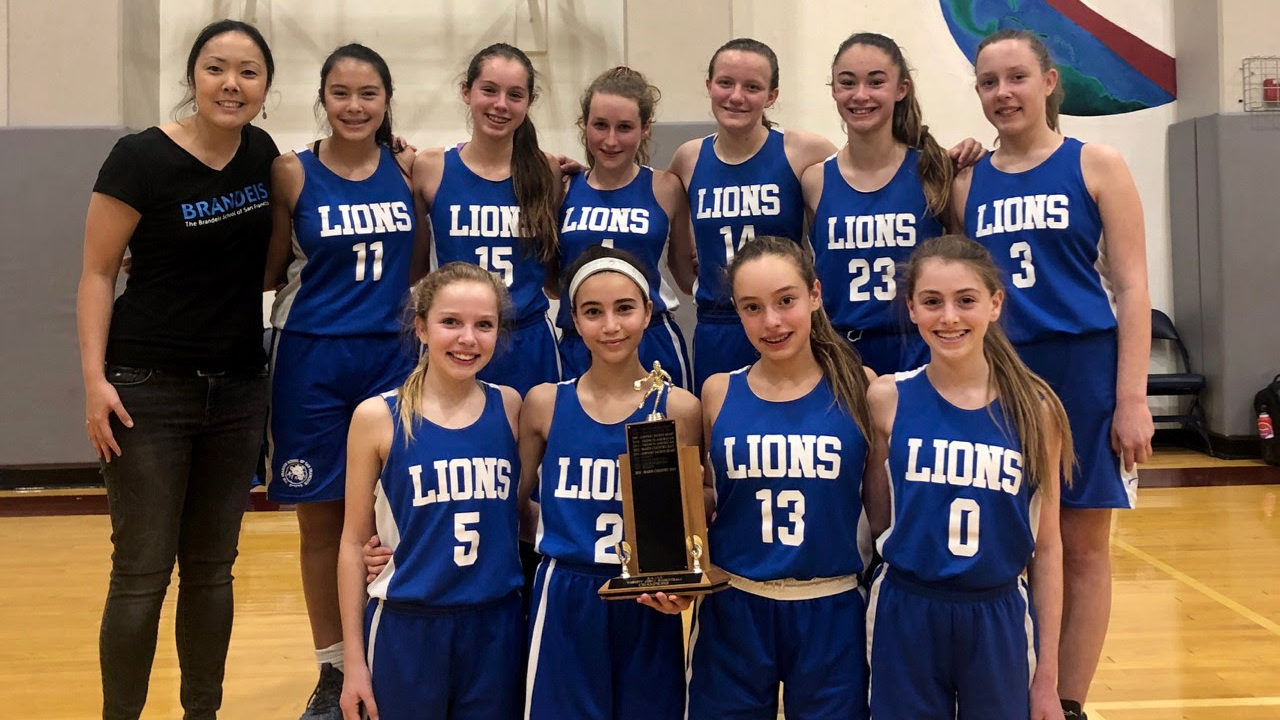 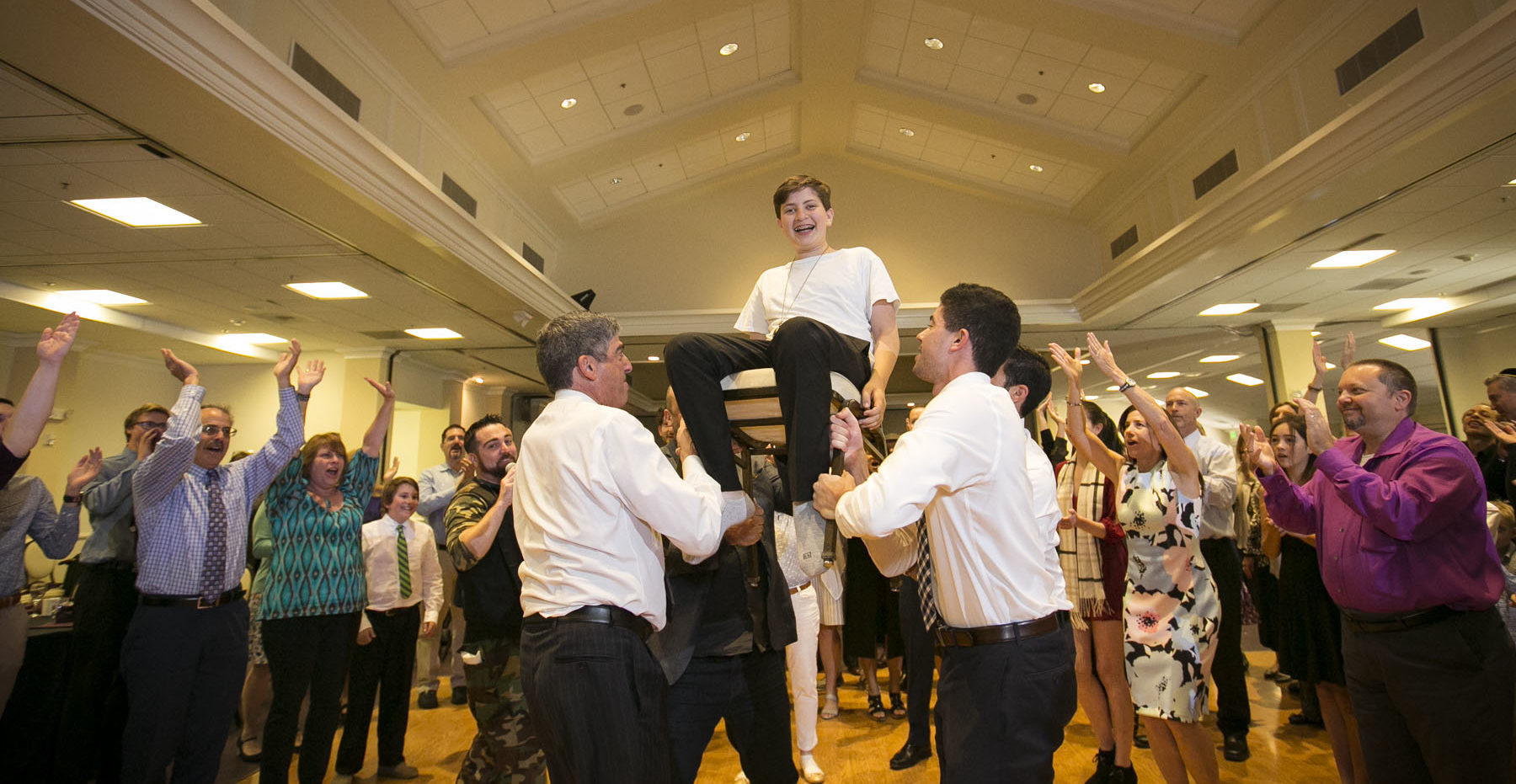