Saxes in the City: Saga begins in S.F., turns corner in Israel

On the 44th day after going on a coffee date with Dave Saxe, Jenn Sockolov knew she was off the market. So she did what many of her peers might do, and proclaimed it on social media. After a few drinks at a de Young Museum gala and after conferring with her husband-to-be to make sure he felt OK about it, Sockolov Instagrammed a photo of them — he in a tux, she in a black cocktail dress — holding champagne flutes with the caption: “Future husband.” And that was that.

Saxe, 38, is from Palo Alto and works in real estate investment. The third generation in a prominent local philanthropic family, he is deeply involved with the Young Adults Division of the S.F.-based Jewish Community Federation.

Sockolov, 28, is a fourth-generation San Franciscan (later residing in Marin) who works as a relationship manager at First Republic Bank.

While the two first crossed paths at the Federation’s Day of Philanthropy in 2013, they didn’t really interact until April 2014, when both attended the Jewish Sports Hall of Fame of Northern California’s induction dinner. (Saxe was there at the invitation of a friend; Sockolov was there because her father and grandfather are board members — her grandfather Bob Sockolov was a 2010 inductee for tennis).

Since there weren’t too many attendees in their age bracket, it was easy for the two to connect. And while Saxe didn’t ask Sockolov for her phone number that night, she had a hunch she’d be hearing from him.

Saxe found her on Facebook later that week and asked her to coffee to discuss “getting more involved in the Jewish community.” Given his involvement with the Federation, it was a line he often used. But this time, he had an ulterior motive.

That coffee date led to a Giants game and more dates, until Saxe asked Sockolov to come with him to Israel on a Jewish Federation of North America’s National Young Leadership mission he was co-chairing.  “That trip to Israel really solidified things for the two of us,” said Sockolov. “Prior to that, I had a feeling this was something more — but the Israel trip definitely made things more serious.”

Said Saxe: “Outside of Jenn’s beauty, she cares so deeply for others. She also has real emotional intelligence and maturity, and I love how she takes on my challenges as her own.”

“Dave has such dedication to everything he does,” said Sockolov. “He’s all-in with everything, whether it’s his work, the Jewish community, his family or me, and everyone knows that about him. He’s 100 percent in, and for so many things.”

The couple moved in together in January 2015, and planned a brunch for their families in March. The night before, they had plans to have dinner and go to a party. Midway through dinner, Saxe said he wasn’t feeling well and wanted to go home.

Sockolov had no clue that his illness was a ruse — and that while they were out to dinner, Saxe’s brother had decorated their apartment according to very specific directions given by his brother.

Sockolov walked in to find rose petals and candlelight everywhere, with “Will You Marry Me?” spelled out in rose petals on their bed.

The next morning when their families arrived for brunch, Saxe pulled Sockolov’s father aside to ask for his blessing, and then Sockolov showed everyone her ring.

The couple were married on May 29 at the Ritz-Carlton in San Francisco by Rabbi Janet Marder, who recited the vows the couple had written to each other.

Among the more serious things he put in his vows, Saxe told his bride that he loved her for putting up with “my unwillingness to throw out old clothes and plastic cups with sports logos on them, my messy eating habits, and my obsession with rotisserie chicken, which for some reason still exists even after living with the most incredible chef for some time now.”

Among the things Sockolov told her groom, “With you there is never a doubt in my mind that I am truly loved. I often give you a hard time about how many emails and text messages you send me throughout the day, but the reality is that every time my phone buzzes, I’m hoping that it’s you checking in to see how my day is going, giving me an update about yours, or sending me a video of you impersonating a panda bear.”

The reception theme was “Saxe in the City.” 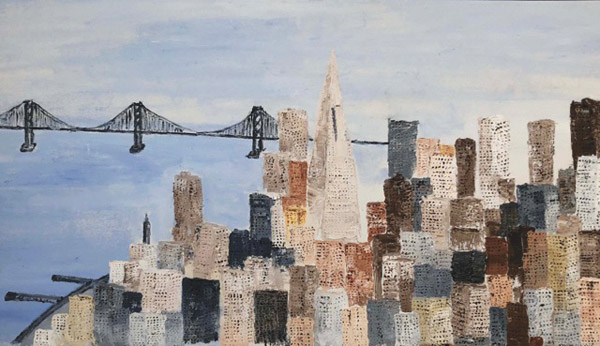