Gov. Jerry Brown signed into law a bill barring California and its public agencies from contracting with businesses that engage in discriminatory conduct due to a boycott of Israel or any other nation, making California the 13th state to take a stand against the boycott, divestment and sanctions movement.

BDS protestor during the Day of Action at Sproul Plaza, UC Berkeley, Sept. 23, 2014

Brown’s office acknowledged the Governor’s signing of the bill on the morning of Sept. 24, including it in a list of 52 bills he had signed. There was no news release or public announcement from the governor’s office specifically about the signing of Assembly Bill 2844, better known as “the anti-BDS bill.”

The bill written by state Assemblyman Richard Bloom (D-Santa Monica) passed overwhelmingly in both the state Senate and Assembly in August, garnering only one no vote in each house. It covers state contracts of $100,000 or more.

AB2844 mandates that “taxpayer funds are not used to do business with or otherwise support any state or private entity that engages in discriminatory actions [including] actions taken against individuals of the Jewish faith under the pretext of a constitutionally protected boycott or protest of the State of Israel.”

Israel is the only country mentioned by name in the bill, although the bill addresses discrimination against any sovereign state.

With the bill’s signing, California joins states including New York and Illinois in opposing the anti-Israel BDS movement. The actions range from laws, such as one in New Jersey prohibiting the state’s public worker pension fund from investing in companies that engage in BDS, to a resolution in Pennsylvania “condemning economic, social, cultural and other boycotts of Israel and growing incidents of anti-Semitism.”

“The state of California sent a strong message that it does not tolerate discrimination, hate or bigotry,” Bloom said in a statement. “The boycott, divestment and sanctions movement seeks to undermine the state of Israel and replace the world’s only Jewish homeland, and only functioning democracy in the Middle East, with a single Palestinian state. AB 2844 helps put an end to that movement here in California.”

“The bill sends the clear and unmistakable message that the state of California wants no part of the goals and tactics of the BDS movement,” Janna Weinstein Smith, the Los Angeles director of the American Jewish Committee, said in a statement.

“I am very pleased, not with just the governor’s wisdom in siding with our cause, but also the swiftness of our actions and stance against a movement pregnant with hate,” Zohreh Mizrahi, president of the IAJF, said in a release.

Critics said the bill was vague and could be misconstrued or subject to abuse.

“In a backhanded way, the bill legitimizes BDS,” Americans for Peace Now said in an op-ed in the Los Angeles-based Jewish Journal. “It states, in effect, that it is perfectly fine to support BDS, so long as you don’t discriminate in the process.”

APN, which opposes BDS but backs targeted boycotts of settlement goods, also said the bill’s prohibitions could inhibit the narrower option of focusing on settlements.

“Does the ‘the nation and people of Israel’ ” in the bill “include settlements that the United States government has long declared illegitimate and that are clearly illegal under international law?” the group asked.

AB 2844 requires companies, when bidding on a state contract, to self-certify that they have a non-discrimination policy that complies with the Unruh Civil Rights Act and the Fair Housing and Employment Act, two landmark civil rights laws that prohibit discrimination based on race, religion, sexual orientation, age and a number of additional categories. In addition, a company cannot have a policy against any sovereign nation or peoples recognized by the U.S. government, including Israel.

“That said, the bill seeks to ensure that those wishing to do business with California are not using First Amendment arguments as a pretext to practice illegal discrimination in the form of boycotts,” Block said in a news release, questioning whether the “current BDS movement (is) merely an attempt to resurrect the age-old boycotts of Jewish merchants, rooted in virulent anti-Semitism, this time masked as First Amendment-protected political speech.” – JTA contributed to this report. 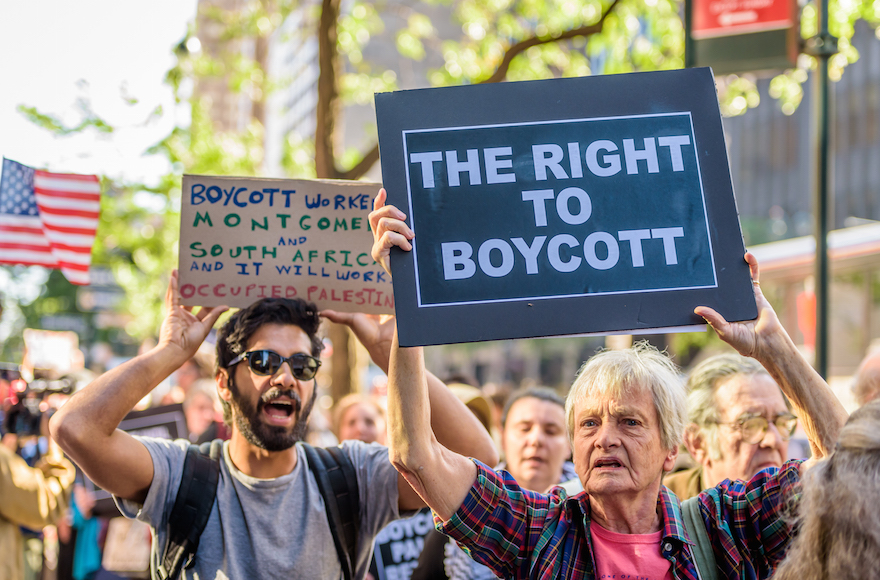