All it took was one meeting with LaDonna Brave Bull Allard, a Sioux elder, to convince Truth Berenson to pack up her Oakland apartment, put all her possessions in storage and drive 24 hours with three companions to Cannon Ball, North Dakota.

There, alongside the sparkling Missouri River and amid rolling grass fields, she joined thousands of others by setting up her tent and watched her neighbors scrawl “NoDAPL”  — opposing the $3.8 billion Dakota Access Pipeline — on their car door.

The 1,172-mile pipeline is projected to carry more than half a million barrels of crude oil per day once completed in January 2017. Its planned route from the Bakken oil shale fields to an Illinois river port will cross under four states, multiple bodies of water and will cause the destruction of sacred Native American sites and burial grounds near the Standing Rock Indian Reservation.

“The night before we arrived I had a Holocaust dream,” Berenson said. “I woke up from that imagining myself arriving at this space, this confluence of all these Native American tribes coming together and the beauty of that and the power of that. I hadn’t been thinking about this in a Jewish context until that dream, when I felt in my bones the collective trauma of genocide.”

Standing Rock Sioux tribal officials claim the pipeline will threaten a source that supplies water to an estimated 10 million people. Energy Transfer Partners, the Texas company building the pipeline, says about 60 percent of the project is completed and that “concerns about the pipeline’s impact on the local water supply are unfounded.”

What began as a small protest camp in April on the banks of the river has transformed into a sprawling village that currently houses thousands of people.  Representatives of nearly 300 tribes are, or have been, present. The long road snaking through the main Oceti Sakowin camp is ringed with hundreds of tribal flags— in what is called the largest gathering of Native American people in North America in the past century.

During the day, people cook food in communal kitchens, build permanent structures to withstand the upcoming winter and travel to nearby construction sites to halt construction and engage in prayer circles. At night, fires crackle in hearths across the plains, and men and women huddle together while they chant and drum.

Several groups in the Bay Area Jewish community are heeding the Sioux tribe’s call for allies in the fight against the pipeline’s construction. On Oct. 23, Kehilla Community Synagogue in Piedmont hosted a Standing Rock solidarity briefing to help local residents learn about ways to join and support the movement.

Wilderness Torah, a Jewish nonprofit in Berkeley, spent much of its recent Sukkot on the Farm festival drawing connections between the events at Standing Rock and Judaism’s ritualistic relationship to water throughout the centuries.

“I personally think that what’s happening at Standing Rock is the most important thing going on in the world right now,” Zelig Golden, the group’s founding director, said in a phone interview. “We’re currently networking with Jewish communities across the country to figure out how to best mobilize support for this movement.”

On Sunday, Oct. 30, Jewish Voice for Peace will co-host an interfaith walk through Oakland that will, among other things, “affirm the call from Standing Rock and over 100 tribes to protect Native people, land, water and sacred sites,” according to the group’s event page on Facebook.

Some Jews staying at the Oceti Sakowin camp even erected a sukkah. When Sukkot ended, the poles that held up the sukkah were incorporated into a fence along the front line of the camp.

“We spoke at a consensus council meeting to explain Sukkot and ask if we could build a sukkah,” Earnest Rose Vener, who used to work for Wilderness Torah and now attends Svara yeshiva in Chicago, told J. in a Facebook message.

Berenson said she met Allard at an environmental gathering in Michigan in July and quickly prepared to make the move to North Dakota.

“I was moved by the poetry of [Allard’s] words, the power of her presence, and her call for us to come support her people as they fight to protect the water,” Berenson told J. in a phone interview. “It wasn’t an intellectual decision. It was just clear I needed to go.”

The conflict drew national attention six weeks ago when Amy Goodman of Democracy Now! captured video of pipeline security personnel attacking protesters with pepper spray and guard dogs. The Morton County sheriff’s department has denied accusations of excessive force by police, saying that 269 arrests have been made since August in response to illegal activity by protesters.

On Oct. 22, at least 127 people were arrested after the sheriff’s department said about 300 protesters trespassed on private property along the pipeline’s right of way.

“This protest is not peaceful or lawful … it was intentionally coordinated and planned by agitators with the specific intent to engage in illegal activism,” Sheriff Kyle Kirchmeier said in a news release following the arrests.

Escalating tensions have led the sheriff’s department to call in support from National Guard troops and from six neighboring states. On Oct. 23, a second request was made by Morton County for additional law enforcement assistance.

The National Lawyers Guild, which has representatives at the protests, told J. that it has received many reports by protesters of harassment and intimidation at the hands of the police. Amnesty International released a statement calling on Kirchmeier “to investigate the use of force” his officers have used against protesters and to “discontinue the use of riot gear … in order to facilitate the right to peaceful protests.”

“We aren’t protesters — we are water protectors,” said Priscilla Pretty Bird, 60, an elder living at the Oceti Sakowin camp who traveled to Standing Rock from the Quecha Tribe of the Fort Yuma Indian Reservation in Arizona. “We are not here to be violent. I came here to help put down medicine, in the ground. To pray for the opposition to open their minds and hearts, for the water to be left alone.”

Hilary Lewis, a San Francisco native who grew up attending services at Congregation Emanu-El, spent a week at Standing Rock in late September as a representative of her employer, Earthworks, a national environmental group that works with communities affected by extractive industries, such as fracking and oil drilling.

“We make pipelines rip through sacred sites and private lands all the time, and that shouldn’t be acceptable. I think the Jewish community would agree that sacred sites are not appropriate for pipelines,” Lewis told J. in a phone interview.

“There are a lot of things the Jewish community could do about the Dakota Access Pipeline without actually going there,” she said. “It could be taught in Sunday school, it could be part of the conversation.” 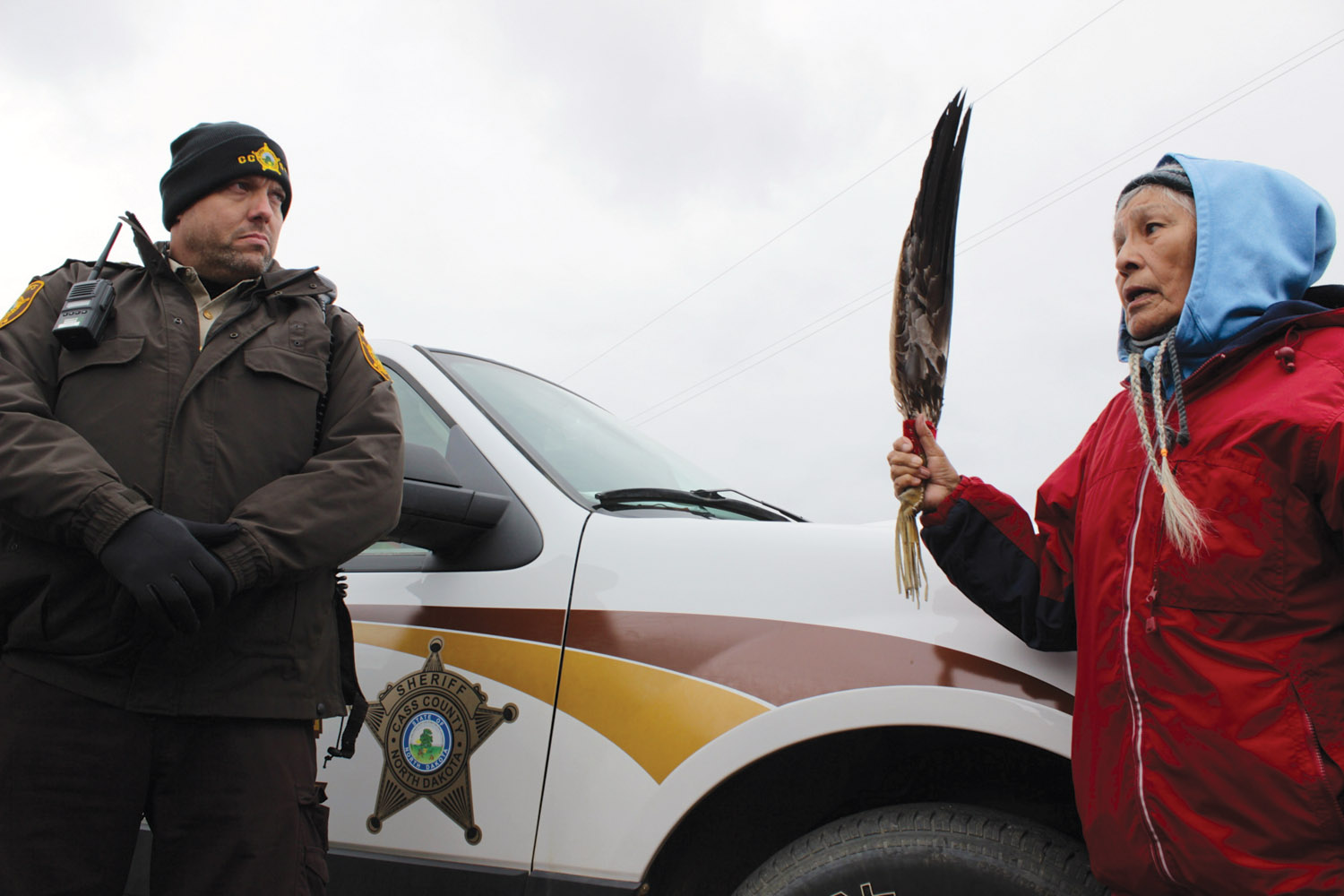 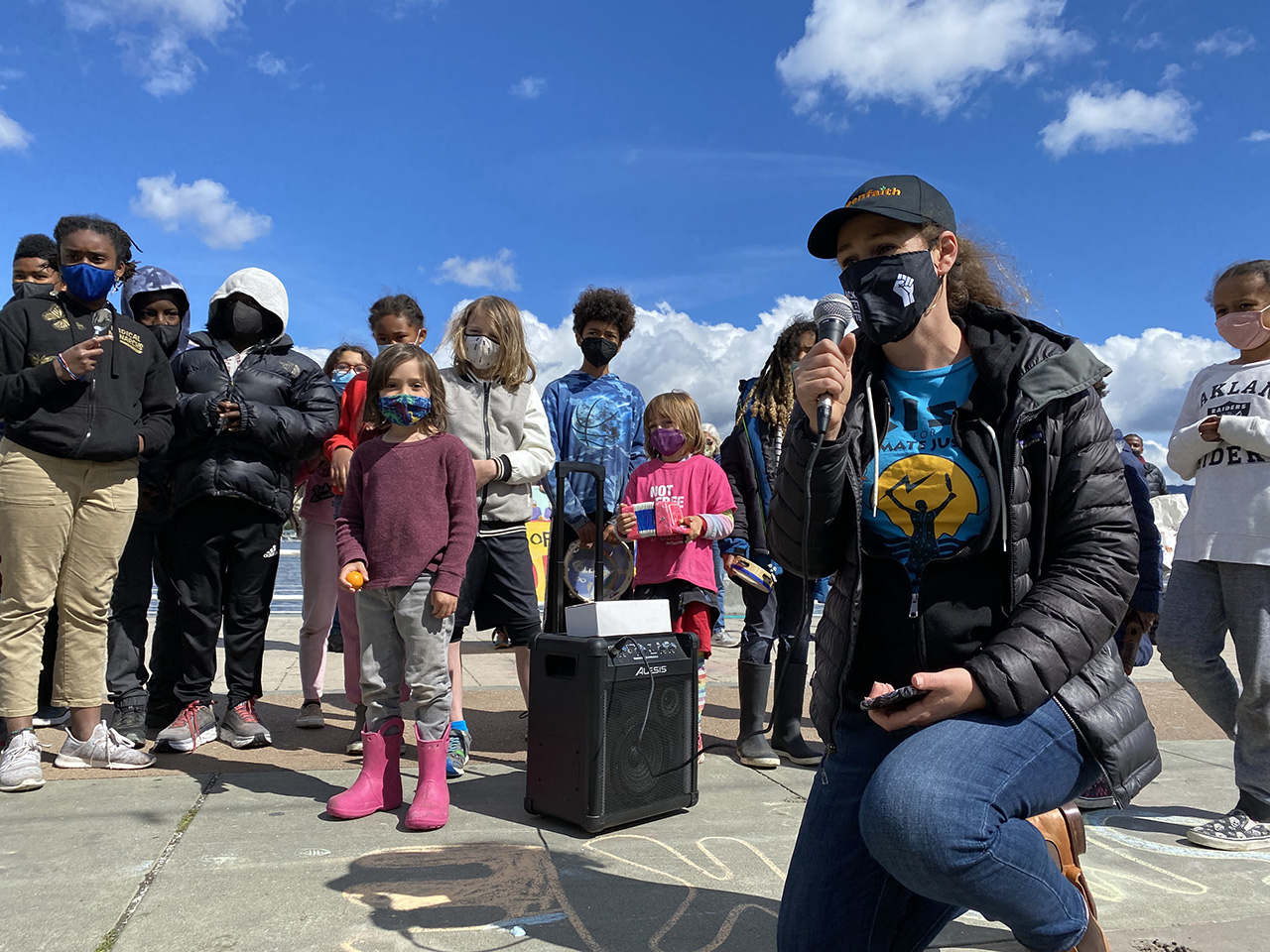