Hearing God’s word above all the noise

The opening verse of the Ten Commandments in this week’s portion is curious (Exodus 20:1): “And God spoke all these statements, saying …”

After all, what we usually hear is Vayedabeir Hashem el Moshe leimor (and God spoke to Moses, to say …). It’s one of the most ubiquitous phrases in the Torah. Why? Because as God communicated the Torah with Moses throughout the 40 years in the desert, Moses was instructed to repeat and relay those teachings to the nation, since no one else was privy to those conversations.

However, the one exception to this was at Mount Sinai, as the entire nation of Israel was present and heard the Ten Commandments directly from God.

Indeed, as pointed out in The Kuzari, a famous work of medieval Spanish Jewish philosopher Yehuda HaLevi, this is one of the unique ways the Jewish faith differs from the others. The other large monotheistic faiths emerged from one or several people claiming to have had a revelation and then subsequently publicizing it and proselytizing others. Judaism makes the claim that we all collectively experienced the same revelation at the same time, thus establishing (to the greatest degree possible) the certainty of its claim, as our 2½ million ancestors who were present and experienced the revelation of Sinai themselves would attest to its veracity.

The great medieval Jewish scholar Maimonides summed it up perfectly when he wrote:

The Jewish people did not believe in Moses our teacher because of the miracles he performed. If one believes in something because of miracles, he may suspect that they were performed through sleight of hand or sorcery … We believe in Moshe because of what happened at Mount Sinai. Our own eyes saw, not a stranger’s, our own ears heard, and not another’s … The revelation at Sinai is the only real proof that Moses’ prophecy was true and above suspicion … (Yesodei HaTorah, chapter 8)

Additionally, the Midrash teaches that not only did all those who were present hear those words, but all of the souls of the yet-to-be-born of future generations were there to listen, as well. So if “we” were all present and heard those commandments, to whom was Moses supposed to relay this information to?

Rabbi Dov Ber — the Maggid of Mezeritch in the 1700s and the foremost disciple and successor of the Ba’al Shem Tov (founder of the Hasidic movement) — explains that the Torah wasn’t just given just once. Rather, every day these words ring out continuously from Sinai and call out to us anew to internalize and absorb them within us.

One of the unique aspects in the description of the revelation of the Ten Commandments was that there was no echo (Deut. 5:19).

Usually an echo signifies the power of a sound. However, an echo also tells us that there is a barrier the sound is bouncing off. A room with soft materials has less echo because the sound is being absorbed. The miracle of Sinai is that the voice was most powerful, it was a great voice, yet because we were there to hear its message, it penetrated every soul to its core, there was no rejection of its content and thus no echo.

The Mishnah in Avot (Ethics of our Fathers) states that every single day that great voice goes forth from Mount Sinai calling out to us. The difference is that at Mount Sinai we all heard it loud and clear. Today our challenge is to hear that voice above the din and noise of a world that suppresses our ability to listen.

It is up to us to develop a softness in our neshama (soul), so that when it hears Torah, it doesn’t bounce off of it like an echo. Rather, it absorbs it the way it happened at Sinai long ago.

This is why when we read from the Torah, we always make the blessing in the present tense, notein haTorah (giver of the Torah), for the Torah is still being given every day.

How do we know this is still happening? When we are moved to study and better understand those holy words, when perhaps out of the blue, we are suddenly inspired to do a mitzvah, or to add a Jewish observance or ritual that we know isn’t in character for us, it’s our soul hearing that voice of “leimor” — that powerful, small, still voice, which has never ceased to continue saying “Anochi”: I am here, waiting for you to come hear me again. 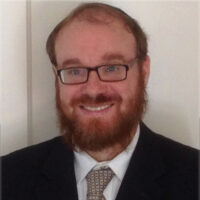