Call it the seven-year itch. Liz Ashby got tired of the same old chopped liver and brisket she had been serving at Paulie’s Pickling in San Francisco’s Bernal Heights neighborhood and felt it was time for a change.

“I’ve been married for seven years, and we’ve had Paulie’s Pickling for seven years. I’ve decided that I’m keeping Paul but changing the food,” she quipped.

The new menu offers Middle Eastern street food, with some distinctly Israeli items on it, like sabich (an Iraqi eggplant and hard-boiled egg sandwich, characterized by the bright orange “amba,” or pickled mango sauce), borekas (cheese pastries), mejadra (a Palestinian rice and lentil dish with caramelized onions) and shakshouka (eggs cracked over a zesty tomato sauce).

“I loved the old menu, but I’ve always loved this food, too,” Ashby said.

Ashby (who has appeared in J. before) grew up Orthodox in Newton, Massachusetts, and still keeps a kosher home. Her non-Jewish husband has one frying pan at home in which he occasionally cooks his own food. For the first years working in the food industry and then when they started Paulie’s, she would have others taste for her because the food wasn’t kosher. Now she will taste herself, but only for her restaurant’s purposes; she still keeps kosher outside the home, too.

While she hasn’t spent any significant amount of time in Israel since she was a child, Ashby has been experimenting with Israeli recipes for a while now.

“I looked at so many different recipes. I’m not offering falafel or hummus because you can already get that in the neighborhood. I know the neighborhood really well, and I know my people, so I started having specials with the old menu and would give people tastes, so I know what they liked.”

The new menu is vegetarian (except for a tuna gyro), so while former customers expecting brisket might be disappointed initially, most know if Ashby’s selling it, it must be good, and they’re tasting their way through the new menu.

Paulie’s is one of three vendors in a small food court, which now has room for a few tables and chairs. Ashby was mindful of not competing with the other food vendors she shares space with, currently Thai and Jamaican.

Among the highlights we tried were the borekas with z’hug (Yemenite hot sauce) and the sabich, and a wonderfully refreshing cucumber lemonade with mint. And one of the must-try items was what Ashby calls “falafel soup.” Haven’t heard of it? We hadn’t either; it’s because she made it up.

“On the old menu we always had a soup of the day,” she said. “I wanted to offer a hearty soup with protein that you can have as a meal. I thought of garbanzo beans, but then giving them the same seasoning as falafel.”

Topped with tahini and za’atar, this soup was all of that, and definitely unique.

Meanwhile, the business is still supplying some restaurants with its pickles, and customers buy them by the jarful at the storefront, but they’ve cut back on selling them at local markets. Paul Ashby was pickling in addition to his full-time job as a contractor, and it got to be too much. Another cook does the pickling now.

Onions, carrots and celery may be three of the fundamental ingredients in many kitchens, but for chef Guy Pinchasi, it’s olive oil, lemon juice and salt.

“Those are the ingredients I use with almost everything,” he said. “I’m not a sauce person. I believe each ingredient has its own unique flavor and texture and taste, and I don’t like to change it. I only like to use things that will enhance it.”

Pinchasi shared some of his cooking philosophy at a demonstration on Israeli hors d’oeuvres with winetasting by Fernwood Cellars at the Oshman Family JCC in Palo Alto last week. It was part of a three-part series about food consciousness and co-sponsored by Hazon, the national Jewish environmental group.

Pinchasi has been working as a personal chef in Silicon Valley this past year, but before that, he worked in some of Israel’s most well-known kitchens, including that of chef Meir Adoni at the Tel Aviv fine-dining mecca Catit.

Pinchasi was limited by not having a stove at his disposal at the JCC, so he had come prepared with some precooked items. His hors d’oeuvres were simple but delicious, like salmon sashimi served in an endive leaf with avocado and beet “cream,” and roasted kohlrabi bruschetta with Cambozola cheese.

Pinchasi roasts vegetables whole, with no tin foil, in a high-heat oven, to bring out their natural sweetness.

Noting that this was his first time doing a cooking demo not in his native tongue, he told his guests to drink more wine, “then you won’t notice my English” (which was fine).

If there was one take-away from Pinchasi’s presentation, it was his opening lines about how too many people are intimidated by the kitchen.

“People are afraid that they’re not going to make the food well, or it will burn, or their guests won’t like it, or their child won’t eat it,” he said. “The first thing you need to leave out of the kitchen is fear.”

Fear should be replaced by love, he said.

“When you get into the kitchen and love what you do, and don’t think about fear or how people might react or what they’ll say about it,” it’s a completely different experience, he said.

Cater a Tu B’Shevat seder at Urban Adamah and you may find your recipe in a cookbook by one of the foremost experts on Jewish food. At least, that’s what happened to Julia Braun, an Oakland-based Jewish food educator and chef. When Braun served a salad of her own invention, Seven Sacred Species Salad with Wheat Berries, Barley, Olives, Figs, Dates, Grapes and Pomegranate, she never dreamed it would be featured in “King Solomon’s Table: A Culinary Exploration of Jewish Cooking from Around the World” (Knopf), Joan Nathan’s latest cookbook.

“It’s an honor to be included,” said Braun. “Joan Nathan is a hero of mine, and I was thrilled to contribute these two recipes, both of which are inspired by my love for the seven sacred species and cooking the Tu B’Shevat feasts at Urban Adamah.”

Braun’s second recipe is a Savory Pumpernickel Caraway Hamantaschen with Caramelized Olive and Dried Plum Filling. (Nathan writes that she had her doubts about it before trying it, but people love it.)

While the collection of 170 recipes has the author flitting from Macedonia to southern India to Arkansas to Brazil in search of Jewish recipes, the Bay Area is represented in a few other ways, starting with the book’s foreword written by Alice Waters of Chez Panisse and Edible Schoolyard fame.

Adam Sobel, a chef for the Michael Mina group, provided the book’s brisket recipe; apparently he taught his non-Jewish mother, who isn’t such a great cook, how to make it. Sobel runs the Mina Test Kitchen, where he once oversaw the execution of a Middle Eastern dinner. He visited Israel for the first time with Israeli American chef Michael Solomonov.

Another dish, while not from a specifically Jewish chef or restaurant, was inspired by a date dessert Nathan had at Sir and Star, a restaurant in Olema. She came up with her own more Mediterranean version: Dates in Brown Butter with Vanilla Ice Cream, Date Syrup and Halvah Crumble. 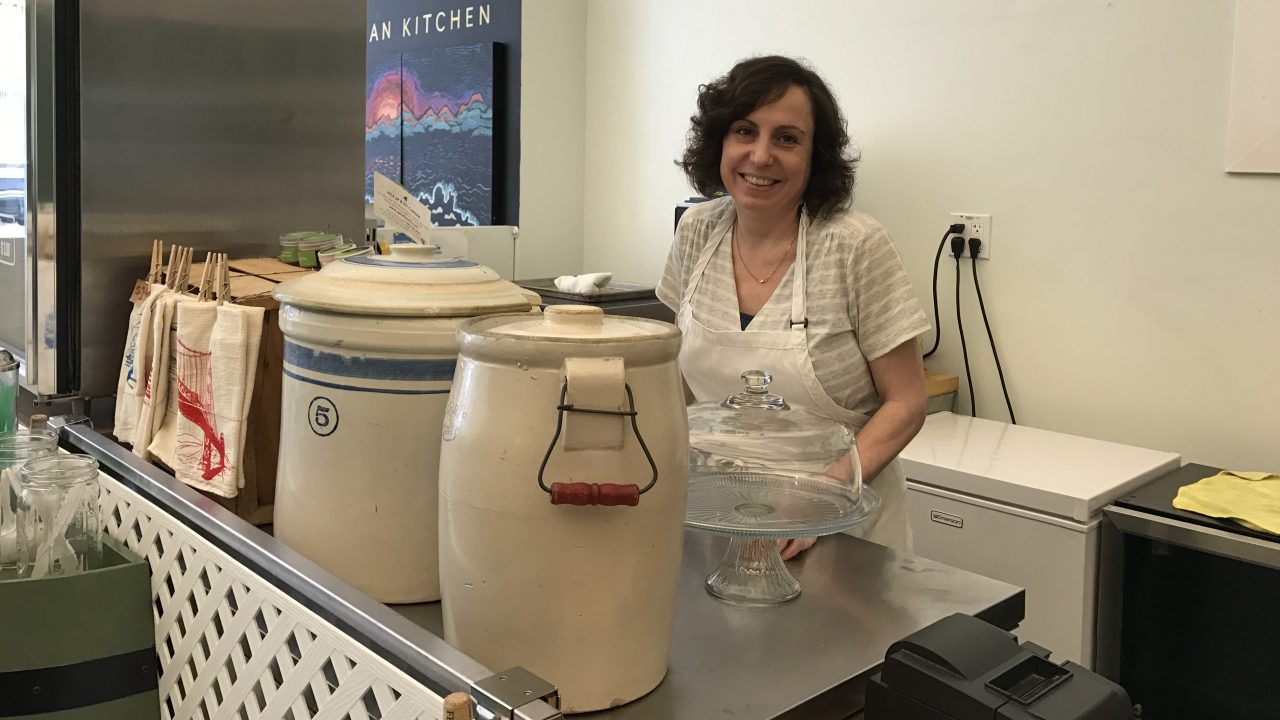