Giving up control is how a mom grows up

When the kids were younger, I could tell them what to eat, what to watch, when to go to bed and, in general, what they were doing and how they were going to do it.

I used to adhere to an ironclad evening schedule. Monday through Friday, we’d come home from preschool and the kids would take a nap. At 4:30 I’d let them watch a pre-approved TV show while I made dinner. We’d eat at 5:30. Bath time was on Mondays, Wednesdays and Fridays at 6:30. Afterward, the kids would sit in our bedroom in their pajamas and watch a cartoon (pre-approved, again by me) while I cut their nails and brushed their hair. At 7:30, I’d read to them in their beds, tuck them in and shut off the lights.

On Saturdays, we’d always go to our favorite café for lunch, and we’d each order the same thing every time. On Sundays, our routine was easy, because their religious school began at the same time as their elementary school.

Now our kids have one foot firmly planted in our home, and the other planted elsewhere — friends, their own interests, and unique sets of likes, dislikes and opinions. I’m not in charge of every aspect of their lives anymore. I’ve had to let go of a lot, which hasn’t been easy for me. But I’ve learned that I’ve also gained something. There are benefits to lightening up.

There used to be only a handful of TV shows I’d let my kids watch. When Samuel wanted more TV time than allowed, I’d give in under the condition that he watch “Nova.” And he did, for hours and without complaint. Now, instead of “Barney,” “Word Girl” and “Nova,” they’ve moved on to “Quantico,” “How to Get Away with Murder” and other awful crime shows. But we also watch TV together: cool documentaries and interesting movies and silly ones, too. And “SNL” — we laugh a lot.

Sweets used to be for holidays, special occasions and weekends. Cut-up fruit would be the after-school snack and the after-dinner sweet. I switched from whole wheat to white bread in middle school when sandwiches in their lunch bags were coming uneaten. From there it was an easy slide to croissants, cupcakes and ice cream during the week.

It was easy when baby wipes quickly and easily took care of all messes. Now, we make mistakes as we muddle through. Things are imperfect. And that’s OK.

But here’s the thing: I’m proud that the kids aren’t picky eaters. They eat pretty much everything we put in front of them, from kale to cookies. Meals have become a fun way for us to come together and connect, especially now that we are all so busy.

Gone are the days when I’d know the kids’ homework schedules. Now it’s on them and up to them. Instead of me micromanaging, they’ll enlighten us with work they are excited about. Last week it was Samuel’s presentation on Medgar Evers; before that, Sophie’s paper on the drug trade’s effect on Central America’s deforestation. It’s cool to learn things from your kids.

Giving them a little wiggle room on one side gives us some wiggle room on the other. I understand I can’t control their lives like I did when they were younger. The days when all I had to do was strap them into the car seat, the bouncy seat and the stroller and take them wherever.

It was easy when baby wipes quickly and easily took care of all messes. Now, we make mistakes as we muddle through. Things are imperfect. And that’s OK.

Maybe there’s been a shift in my priorities that’s also causing me to let out the reins. I’ve moved all that stuff that I thought was a big deal (bedtime, snacks, TV watching, rigid schedules) to a lower spot on the shelf. What’s now on the top shelf is wanting the kids to learn how to be independent, pull themselves up when they’ve had a setback, learn the value of hard work and instill in them Jewish values.

How much sugar they eat is less important to me than what they’re doing to help make the world a better place. Being kind and “doing kind” is more important than the hours they spend binge watching “Lost” and avoiding the mess in their rooms.

What I really want to do is squeeze my kids all the time and hold them tightly and fiercely. But I know if I smother them too much it will backfire. So for now, I’ll lighten up and take what I can get. 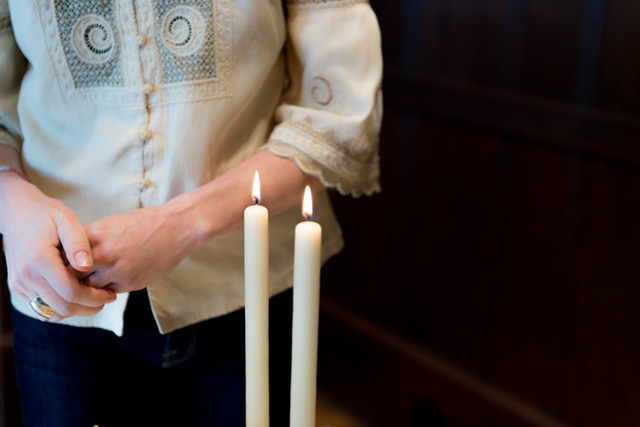