With those words, the Passover narrative begins. And with those words, Jews who have recently arrived in the Bay Area from the Soviet Union will be thinking about two things — the freedom they’re savoring now, and the nightmare of anti-Semitism they left behind.

From the first week of their arrival Feb. 8, Mary Dubrovskaya and her family, for example, have been busy learning English, beginning a job search, furnishing an apartment in San Francisco, and adjusting to their new lives in America.

Those lives tend to be hectic and confusing, sometimes grating, sometimes frustrating. At the same time, however, the family is looking forward to celebrating Passover here.

Former Passovers, they explain, passed without much fanfare. Dubrovskaya, as well as her brother Vladimir Gofman, who arrived in San Francisco a year ago, had similar experiences. “It was a festive dinner — that’s all,” she said.

If the Passover Haggadah dictates that Jews retell and relive the history of oppression to freedom, the Dubrovskaya-Gofman clan will be adding their own oral family history to the legacy.

Dubrovskaya’s great-great-grandfather was an observant Jew who was killed in a pogrom in the 1800s. Her own husband had seen his religious schoolteacher killed and the classroom building burned to the ground by anti-Semitic Ukrainian mobs in the 1930s.

Even now, the family worries about the relatives they left behind. Like many Soviet Jews, they are concerned that anti-Semitism among the masses may be growing. The most alarming development, they say, is the emergence of a right-wing nationalist movement known as Pamyat, which holds, among others things, that Zionists control both the Soviet and international press. Nor are they encouraged by reforms that include the opening of a yeshiva and Jewish community center in Moscow. “You can’t change more than 100 years of Soviet anti-Semitism overnight,” Gofman said.

ROME, (JTA) — Representatives of the Join Distribution Committee and HIAS in Italy have set up a coordinating committee to facilitate the applications of Jewish displaced persons in this country who desire to immigrate to the Unites States under the Displaced Persons Act. Meanwhile, it was revealed by Louis Horowitz, JDC director for Italy, that a recently announced International Refugee Organization — Italian Government — JDC agreement designed to speed the transfer of DPs from this country to Israel has not yet gone into effect.

TEL AVIV, (JTA) — Only about three to four thousand Jewish refugees remain in Italian displaced persons camps and will be transferred to Israel soon, Arie Oren, Israeli consul general at Rome, said on his arrival here this week.

ATHENS, (JTA) — A government decree implementing a 1946 law providing for the turning over of Jewish heirless property to a fund for the rehabilitation of needy Greek Jews was published in the Official Gazette this week. The decree, approved by the Cabinet several weeks ago, was signed by King Paul March 27.

Mail to Israel is Censored in Syria

NEW YORK — A complaint from the National Education Department of the Zionist Organization of America that its mail to Israel was being censored by Syrian authorities enroute, has brought a quick pledge from the U.S. Post Office Department that mail to Israel will hereafter be routed directly.

An air mail letter addressed to Carl Albert, Director of the ZOA Education Department to a correspondent in Givatayim, Israel, was returned recently with the notation: “Service between Syria and Palestine Interrupted.” The letter had been opened and bore the marks of the Syrian postal censor. 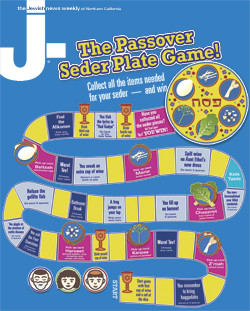