Reutlinger seeks funding for Holocaust survivors and other residents in need

For years, the Reutlinger Community has quietly assisted Holocaust survivors and residents who have simply run out of money and otherwise could not afford to stay at the senior residence.

Now, the facility’s Resident Assistance Fund itself is in need of aid.

The Reutlinger Community/Schiff Center for Life has asked rabbis at East Bay and Tri-Valley synagogues to help get the word out that the fund can no longer keep up with residents’ needs.

Declaring May 19 and 20 “Shabbat Across the East Bay,” the Danville Jewish senior living facility hopes to raise awareness of the “critical need in the community” to bolster the account. So far, six congregations have signed on.

“As residents enter the community today, they do so older, frailer, and with fewer financial resources than in the past,” Reutlinger CEO Jay Zimmer said in a letter to area rabbis. “Our excellent care has allowed residents to live longer lives, but in the process of doing so they often deplete their financial resources and require a subsidy to meet their expenses. The cost of those subsidies now approaches $1 million annually — an amount we can no longer sustain financially.”

Resident Assistance Fund expenses nearly doubled in the 2015-16 fiscal year alone, according to the nonprofit, which began as the Home for Jewish Parents in Oakland more than 60 years ago. The board has set a strategic goal of doubling the size of the fund’s endowment to ensure it serves current as well as future residents.

Sixteen residents — the majority of them Holocaust survivors — are being subsidized, Zimmer said.

A “continuum of care” facility, Reutlinger provides several living situations for its 180 residents — ranging from assisted living for fairly independent folk, “enhanced” assisted living, memory care to skilled nursing and rehabilitation. Fees are all inclusive — covering meals, housekeeping, nursing care, social services and more. Base fees range from $5,500 a month for a studio apartment in the assisted living unit to $7,500 a month in the memory care unit. At the skilled nursing care and rehabilitation center, fees start at $292 a day.

Karen Hamilton, whose mother, Renee Nosanchuk, has lived at Reutlinger for four years, is grateful for the financial aid.

“I pleaded, kind of cried, to get her in there,” she said.

Nosanchuk, 84, had been living with Hamilton and her husband in Concord. But Hamilton, who works in San Francisco, said that after her mom began losing her balance and falling, the family started looking at senior residences.

“My mom didn’t have a lot of money,” Hamilton said. “She just had a small retirement and Social Security.”

At Reutlinger, “They were kind enough to take her in at a very low rate.” Nosanchuk was placed with a roommate for the first few years and then given a studio, “which is perfect for her,” Hamilton said. “She loves it there.”

Her mother, who uses a walker to get around, takes full advantage of the many activities and especially appreciates the kosher meals, Hamilton added.

“I don’t worry about her anymore,” she said.

Another resident who receives assistance — she’s been at Reutlinger for 10 years — depleted her assets after a few years there. When that happened, “It was a struggle for us; we had to pay out of pocket for a bit,” said her daughter (who wished to remain anonymous). Had the family not received aid, she added, “I don’t know what we would have done.”

Her mother, now 100 years old and in the skilled nursing unit, is nonetheless “thriving” — going to lectures and recitals, even painting — a hobby she took up eight years ago in the art program — which “is phenomenal,” her daughter said.

“We have a really terrific community” at Reutlinger, added the daughter, who lives about 25 miles away and visits her mother about once a week, often for lunch on the patio. There’s “wonderful care” and a “wonderful rabbi,” she said. “This is a blessing.”

Debora Kohn, the full-time rabbi at Reutlinger who is coordinating Shabbat Across the East Bay, said participating synagogues have pledged to help get the word out to congregants through their newsletters. Signing on so far are Congregations Beth Chaim in Danville, Beth Emek in Pleasanton, B’nai Tikvah in Walnut Creek, Beth Torah in Fremont, Temple Beth Sholom in San Leandro and Temple Isaiah in Lafayette.

Kohn noted that among staff, information as to who is receiving aid from the Resident Assistance Fund is kept “absolutely confidential.”

“Most of us [on staff] do not know who is getting financial assistance and who is not … It makes no difference in the care they get.”

Besides leading religious services, Kohn works with residents and their families on a full spectrum of activities — from celebrations to end-of-life matters.

“People are with us for many years,” she said. “We become like family.” 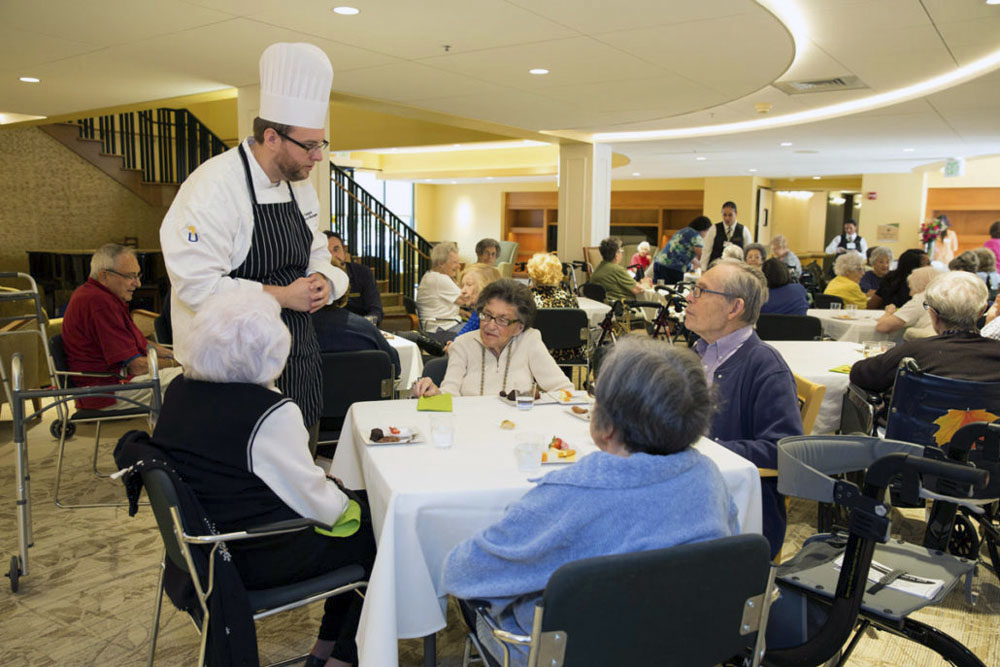