Grandma’s attic leads to an exhibit at Palo Alto JCC

As the only grandchild in her family, Roslyn Sholin inherited a Pennsylvania house in 2002 — and a bunch of dust-covered boxes in its attic.

Fifteen years later, the contents of those boxes have turned into an exhibition of family life that traces the Jewish immigrant experience in America.

“My Attic, Your Story,” on display at the Oshman Family JCC in Palo Alto through Nov. 1, tells the story of Sholin’s maternal grandmother (Sadie Tick) and her descendants through their artifacts.

From Passover haggadahs to World War II dog tags, from a 1924 tax return to a set of Ten Commandment cufflinks, the display cases at the JCC follow a family’s journey through the American experience.

“The Sadie story and what it represents is very powerful,” Sholin said. “I also think the process of telling stories using ordinary objects is very potent.”

Sadie came to Scranton, Pennsylvania, from Poland as a Yiddish-speaking teenager early in the 1900s. An invitation to her 1912 arranged marriage to Joseph Tick is on display.

The Ticks bought a house in 1921 and raised four children there. Two of the four were lifelong bachelors who remained in the house after Joseph died in 1951 and Sadie passed away in 1958. After the last of her uncles died in August 2002, Sholin attended the funeral and then stopped by the house where as a young girl she had visited her grandmother.

“I was the only heir,” she said. “I walked into Grandma’s house and it was now my house, and it was an urban archaeological site.”

Sholin, who spent her career in finance at Bay Area high-tech and biotech firms, started making regular visits last October to the Scranton home to get it ready for sale. A brochure that accompanies the exhibit says she discovered “a living, breathing museum” there.

“The October trip was like the discovery phase where you went through layer upon layer,” she said. “I would pull down these boxes in the attic that were full of dust, and they were organized by decade. Each one was more flabbergasting than the other. Each one packed a punch.”

There were family photos and old cookbooks, candlesticks and an 1867 Russian kopek coin. One box yielded a 1912 receipt for Sadie’s engagement ring, which Sholin still wears.

The artifacts sat in Sholin’s home in Emerald Hills, in San Mateo County, until a couple of years ago — when she attended the annual convention of the Council of American Jewish Museums, in San Francisco in 2015, and got serious about creating her own exhibit.

She had documents translated from Yiddish and Russian, and hired a curator. She met with arts directors at Bay Area Jewish organizations, and picked the Palo Alto JCC for the exhibit’s debut.

The exhibit is housed in the JCC’s fitness center, with some of the artifacts lining a hallway outside the spinning studio. People swimming and working out walk past the Tick family’s dishes and jewelry.

Sholin said she hopes to take her exhibit to other Bay Area Jewish facilities after its stay in Palo Alto, making it accessible to people who may remember similar childhood scenes when they visit Sadie’s attic. 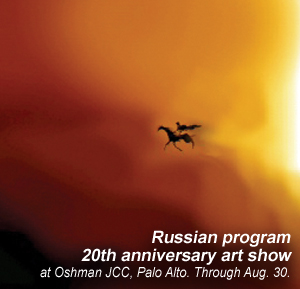 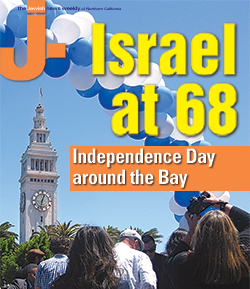 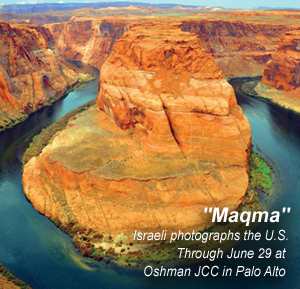