Updated 5:10 p.m., Nov. 15 to include plaintiffs’ intent to amend their complaint.

A group of Jewish students and community members whose lawsuit alleges systemic anti-Semitism at San Francisco State University vowed to amend the complaint after a federal judge said he would dismiss their original filing because it lacked specificity.

U.S. District Judge William Orrick said at the end of a 57-minute hearing on Nov. 8 that the suit filed by the Lawfare Project on behalf of the Jewish students needed to focus on the current situation on campus and not on what it had claimed was a half-century of anti-Semitism at SFSU.

“Undoubtedly, I’m going to dismiss the complaint with leave to amend, and I’d start honing the complaint,” Orrick advised Seth Weisburst, an attorney for Lawfare. “A shorter, plainer statement of the claim would be a better submission.”

Weisburst said after the hearing that “we’re confident we’ll be able to amend the complaint to address the concerns the court has.”

Lawfare filed the suit in June, pointing to decades of alleged anti-Semitism at SFSU and focusing on two events: the campus shout-down of Jerusalem Mayor Nir Barkat by pro-Palestinian groups in April 2016 and the exclusion of San Francisco Hillel from hosting a table at a February 2017 “Know Your Rights” fair on campus. The suit seeks monetary and punitive damages, admission of fault, and actions aimed at protecting Jews on campus.

“Jews are afraid to walk from point A to point B on campus. They are afraid to wear a Jewish star (necklace),” Weisburst said in the hearing. “Jews are treated like second-class citizens on this campus. It’s not just from students, it’s from the administration.”

Bradley Phillips, an attorney for SFSU, said there was no evidence of university discrimination against Jewish students and that offensive speech by pro-Palestinian groups who protested Barkat’s appearance was protected by the First Amendment.

“I think those statements are all directed at Israel, Israeli policy and the mayor’s policy. They are not directed at people because they are Jewish, there is a difference,” Phillips said at the hearing.

A university investigation of the “Know Your Rights” fair made public in August determined that Hillel had been a victim of retaliation and was denied its free-speech rights, but it rejected accusations of religious discrimination in Hillel’s exclusion from the fair. That case remains on appeal.

The judge said he found no evidence that Jewish students were denied their First Amendment rights in the incident involving Barkat, and no violation of equal protection rights in the “Know Your Rights” event.

“There aren’t allegations of direct discrimination,” Orrick said. “I think more needs to be alleged than the events that have been described to show a hostile environment today. We can’t rely on what happened in 1973. The claim lacks specificity.”

Elizabeth Smith, SFSU’s associate vice president for marketing and strategic communications, said the university was “pleased that Judge Orrick recognized the plaintiffs’ claims that the university discriminated against them based on their Jewish identity and that the university has been indifferent to their concerns about anti-Semitism are not viable.”

“Instances of intolerance or anti-Semitism are neither promoted nor tolerated at S.F. State by the president or by administrators,” Smith said. “San Francisco State University is deeply committed to the elimination of anti-Semitism in our community and to fostering a safe and welcoming campus for our Jewish students.”

The Lawfare case specifically targeted Rabab Abdulhadi, a professor in SFSU’s College of Ethnic Studies, and asked that she be forced to pay damages. Judge Orrick cast doubt on those allegations, saying the lawsuit lacked evidence that “she acted with specific intent to discriminate against the plaintiffs.”

About 60 people rallied outside the courthouse before the hearing, demanding that Lawfare’s suit be dismissed and saying it was an attempt to stifle free speech at SFSU and to silence Abdulhadi. They then packed the courtroom, and later celebrated the judge’s plan to dismiss the claim.

“This is new McCarthyism, to silence any Muslim,” Abdulhadi told supporters after the hearing. “They want to be able to stop us from being able to speak. They want to stop me from teaching.”

One of Abdulhadi’s attorneys, Ben Gharagozli, said he looks forward to Lawfare refiling the case.

“The plaintiffs are going to have another chance to humiliate themselves in court,” he said after the hearing. “It would have been great for it to end here, but I think this is even better because we get to beat them again.” 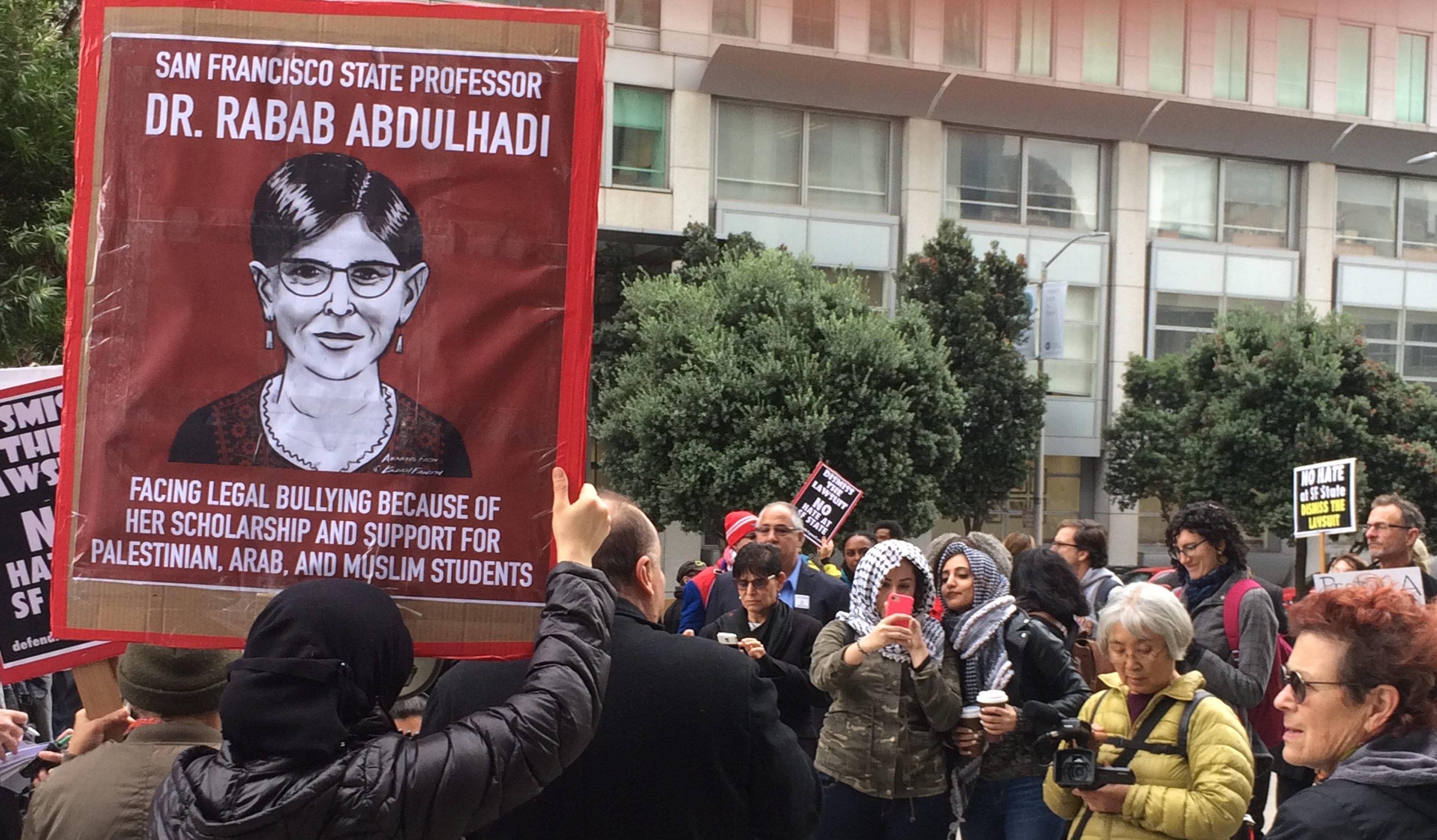