‘Yiddish not spoken here’ — but my dad had a different idea

I grew up in Israel in a domestic war zone — a “language war” that raged between my parents. The fight was between Hebrew and Yiddish. Ours was not the only household where this war was fought. It was a struggle between the new Israel and the old diaspora, but it was very personal and quite emotional.

My mother grew up in Tel Aviv, went to a school for girls in Neve Tzedek, where the language of instruction was Hebrew, and spent time on a kibbutz before returning to her beloved Tel Aviv and becoming an actress. Yiddish for her was a symbol of the doleful diaspora (galut d’vuya). My father, on the other hand, came from Lithuania in 1935 to join the Ohel Theatre and later the Cameri Theatre as a stage actor. He knew and spoke Hebrew perfectly, with no apparent accent, but Yiddish and Yiddishkeit flowed in his blood.

And then the two of them met. My mother told me later that the worst thing that could have happened to her was falling in love with a man called Zalman. Zalman is one of those terribly diasporic names. And while many Israelis changed their first and last names to Hebrew at the time, my father refused to do so. He was holding on to his identity.

When the 1948 war broke out, my mother was adamant that Yiddish would not be spoken in the house. She herself did not know Yiddish, so it meant that guests were not allowed to speak Yiddish either.

He taught me how to read Yiddish in secret.

But my father had planned a sweet revenge. He taught me how to read Yiddish in secret. When my mother was out, he and I would sit together, and in no time I was able to read. It’s not that difficult for those who know Hebrew, since it has the same alphabet, but it doesn’t use vowels. We would sit on the terrace, comfortable in wicker armchairs, and he would close his eyes and listen to me read from a book of songs and ballads by Itzik Manger, a beloved poet. I would read one poem after another and he would laugh or smile and sway from side to side to the rhythm of these wonderful and playful poems. Once he told me that I read as if I understood it. You see, I could read very well, and had the right intonation and rhythm, but I didn’t understand a word.

Nowadays I understand just a little bit, enough to understand a joke or to bring tears to my eyes when I hear a Yiddish lullaby. I guess that even though the only lullabies I heard in my childhood were in Hebrew, Yiddish and Yiddishkeit run in my blood also.

While Hebrew was the default language in my household and both my parents were immersed in Hebrew culture, literature and poetry, I was denied the knowledge of this other language — the language of my father’s childhood, of his heritage.

I’m happy to say that nowadays there is a Yiddish revival movement in Israel that includes literature, poetry and theater. I hope for all Israelis to embrace their heritage by keeping alive Ladino, Arabic, Amharic and all the other languages of their parents’ lullabies. There are many ways to be Israeli! 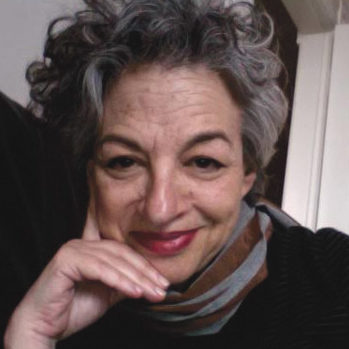 Vavi Toran is the Israel education specialist at Jewish LearningWorks and an accomplished artist and public speaker on Israeli arts and culture.