At noon on April 19, I stood as a siren sounded and church bells began to ring throughout Warsaw to honor the 75th anniversary of the Warsaw Ghetto Uprising, that astonishing and tragic battle by Jewish men and women who led the first civilian revolt in all of Nazi-occupied Europe. The Nazis needed a month of heavy fighting to subdue the rebellion in the ghetto, which before the war had been the thriving Jewish district of Muranow, immortalized by I.B. Singer and other Yiddish writers.

As I walked through the city, young people filled the streets handing out paper daffodil pins for coat lapels, with the words “Warsaw Ghetto Uprising” and the date “19 April 1943.” Daffodils were the spring flowers that uprising commander Marek Edelman used to place each year at the foot of the Ghetto Fighters Monument, created in 1948 to remember the brave people who fought alongside him, most of whom perished. The daffodil pins were part of a campaign to “connect through memory” that was organized by POLIN Museum, which stands opposite the monument.

Eventually, I joined thousands of people from Poland and around the world, of all faiths and nationalities, to participate in the official ceremonies honoring the anniversary — and of reviving the memory of those events. Standing on the actual site of the revolt, I could not help but feel a yearning to see the faces and hear the voices of those who fought their last stand in the name of Jewish dignity.

While the former ghetto is certainly a geographical place of memory, as Elie Wiesel once said — a memory of overt violence — it is also a place of cultural resistance. Seventy-five years ago, 60 Jews trapped inside the Warsaw Ghetto, facing certain death, created an irrefutable and lasting record documenting the brutality of Nazism from beyond the grave.

The story of Emanuel Ringelblum isn’t well known inside the United States, but it should be. In the wartime ghetto, Ringelblum and other historians, photographers, artists, social workers and ordinary Jews armed themselves with pen and paper, camera and paintbrush, resolutely documenting Nazi atrocities and the oppressive daily life in the ghetto. They buried their evidence so that it might be uncovered and used against the Nazis when the day of reckoning came to the Third Reich. Unearthed, the documents offer a unique testimonial to the plight and extermination of Polish Jews in 1940-43.

The legacy bequeathed to us by the armed and cultural fighters of the Warsaw Ghetto resonates deeply in present-day Poland, where historical memory is being preserved, confirmed and dignified through careful academic research, while it is simultaneously confronting open challenges in the political realm.

At the Emanuel Ringelblum Jewish Historical Institute in Warsaw, the place where the ghetto documentarians used to meet to organize the materials they had collected, an extensive program of conservation, publication and analysis has been ongoing for several decades, largely with support from Poland’s Culture Ministry. The entire archive of 35 thick volumes is being translated into English for publication and digitization. I’m proud that the Taube Philanthropies, which I direct, is subsidizing this effort.

In the political realm, Poland’s government has enmeshed itself in national and diplomatic crises triggered when it passed a law that could criminalize misrepresentation of Poland’s role in the Holocaust, including use of the phrase “Polish death camps.” The controversial law, which many worry could stifle discourse about World War II in Poland, especially its relations with its Jewish citizens, has fueled levels of anti-Semitism in Poland and of anti-Polish sentiment in Israel not seen for many years. The law challenges the difficult process of honestly confronting memory — something that is inextricably linked to these kinds of commemorations.

After the official ceremonies, I walked through the city, observing people of all ages who were wearing some of the more than 70,000 daffodil pins distributed in Poland and internationally. A young woman approached me with a pin, told me the history of the uprising and said it is our common heritage — regardless of nationality or religion. A couple asked me for directions; a deaf person asked me to sign a petition for the rights of the disabled; others simply smiled and nodded. I saw many daffodils on my walks, as well as on bus and tram rides, and each person I saw locked eyes with me and smiled, as if we shared a badge of knowledge and connectedness.

In this time of uncertainty, the daffodils brought Polish citizens together in the name of memory: the memory of the Jews who lived in Poland for centuries, the knowledge that ultimately Hitler failed — and the understanding that sharing those memories brings us closer together as human beings.

The author is the executive director of Taube Philanthropies, which made a gift of $1 million to translate, publish and digitize the Ringelblum documents, and an additional $500,000 to fund the renovation of the Emanuel Ringelblum Jewish Historical Institute’s main hall, which, along with the entire building, survived the German occupation of Warsaw. 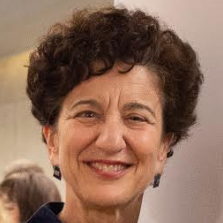 Shana Penn is the executive director of Taube Philanthropies.