Why we need Jewish Disabilities Awareness and Inclusion Month

My father had been summoned to meet with the Hebrew school principal. “What have you done?” my mother asked.

“Nothing,” I replied with absolute accuracy.

I can vividly recall my father returning home from that meeting. He was angry.

“Your teacher says you are mentally retarded. The principal says they don’t teach retarded kids. They are removing you from the school.”

I had been labeled and discarded. Yet my Hebrew school principal was not an unkind man. I remember him for his warmth and enthusiasm. My teacher was a young Israeli woman who was actually very nice.

Labeling and discarding. It was part of the culture, in both the Jewish and secular worlds.

February will be Jewish Disabilities Awareness and Inclusion Month, a designation that did not exist in the fall of 1961, when I was denied a path to my bar mitzvah because I was expelled from Hebrew school for lack of smarts.

If you were ever wondering why we need a specifically Jewish disabilities awareness, it’s because the problem has been part of our culture. Jews value learning. We have community nachas (pride) for the accomplishments of all of those smart Jewish people.

The trap becomes how we treat those who are not so smart. “Not everyone is an Einstein,” my father told me, while adding with pride that Einstein was Jewish.

This is ironic because the text is so clear. You don’t need to find a subtle point in the Mishnah. The Passover haggadah tells the story of four sons: The simple one is treated kindly at his level of understanding; it is the smarty-pants, arrogant one who is put in his place.

In my time, I served on three school boards, one Jewish and two public districts. The culture has changed dramatically for children, in part due to the Americans with Disabilities Act of 1990, signed by a president, the late George H.W. Bush, who envisioned a kinder, gentler nation.

Yet, how kinder and gentler are we with the adults? How do we interact with those we come across in everyday life? Have you noticed the middle-aged man bagging groceries who speaks with a stutter and doesn’t make eye contact? Do we allow him to remain invisible?

I have a Chicago cousin whose learning disabilities are apparent. His curse in life is not his disability. It is social isolation. About 20 years ago, he joined a health club. He told me about a man who would chat with him when their workout times overlapped. I thought, “What a mensch.”

The man had an unusual name. One I had not heard before: Barack Obama.

Disability Sensitivity Training 101: Be a mensch.

My personal story became family folklore. My father was not about to accept the principal labeling me “retarded” or his expulsion pronouncement. My father made a bet that he could get me up to grade level in two months, with the help of a tutor, if the principal would defer my expulsion.

My father was irritated particularly with me. Three weeks earlier, at a parent-teacher conference, my fourth-grade teacher in public school had informed my parents that I was the smartest boy in the class.

Returning home from that conference, my mother kvelled, “Gordy, we are so proud of you!” 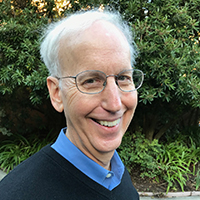 Gordon Lewin is a member of the Coastside Jewish Community. He served on the boards of the Palo Alto School for Jewish Education, Menlo Park City School District and Sequoia Union High School District.