Allan G. Byer passed away at his home in Hillsborough on April 11, 2019 after a long illness. He was 91 years old.

He was born in Cincinnati, Ohio in 1927, the only child of Isa and Lillian Byer. In 1949, Allan graduated from Ohio State University with a B.S. in Business Administration. Upon graduation, he worked as a sales representative for several women’s clothing firms and served his country as a Naval Petty Officer during World War II and the Korean War.

A job with apparel manufacturer Fritzi of California brought Allan and his new bride, Marian, to San Francisco in 1959. After several years of hard work, and with the loving support of Marian, he founded Byer California in 1964. Byer California continues to be a key supplier of young, contemporary women’s and girls’ fashion sportswear and dresses to leading department stores throughout the United States.

In 1992 his love of baseball led him to join the new ownership group of the San Francisco Giants, which kept the team from moving to Florida. He was a leader among the group, known for his wit, candor, generosity and passion for the community. He was a fixture at both Candlestick Park and Oracle Park and enjoyed celebrating the Giants’ World Series victories in 2010, 2012 and 2014. He also dedicated his time and energy to the Giants Community Fund as a longtime board member and supporter.

Allan also established Byer Properties, which owns and operates Bay Area commercial properties, including community shopping centers in Cupertino and Santa Clara and 128 King Street — a landmark building across from Oracle Park in San Francisco. In 2014, he created Cooperstown S.F. at 128 King Street, a Hall of Fame exhibit space that includes more than 40 memorabilia cases of game artifacts and mementos, memorable artwork, and recognition of the members of the Baseball Hall of Fame in Cooperstown, New York. The space also includes special sections devoted to the Giants’ Hall of Fame members as well as the Bay Area Baseball Exhibit (B.A.B.E.), which recognizes teams, players, and others with Bay Area connections.

Beyond his love of baseball and the Giants, he was a dedicated philanthropist and was instrumental in building the Peninsula Jewish Community Center in Foster City and the new Mills-Peninsula Hospital in Burlingame. He previously served on the board of the San Francisco Campus for Jewish Living and was President of the San Francisco Fashion Industries organization. In 2007 he was inducted into the Jewish Sports Hall of Fame in Columbus, Ohio. Additionally, Allan and Marian were avid golfers and loved playing rounds with their longtime friends at Lake Merced Golf Club and The Springs in Rancho Mirage, California.

A memorial service was held. In lieu of flowers, donations can be made in memory of Allan to the Giants Community Fund at jrgiants.org or to Peninsula Temple Sholom at sholom.org.

Haya Krausz was born on April 21, 1926 in the Carpathian Mountains in Czechoslovakia. She was raised Orthodox along with her six siblings. Haya was very young when the Holocaust started but managed to survive; however, her parents, grandparents, and three of her siblings did not.

She and Tom married in 1946 and welcomed their first daughter, Ann, while living in Italy. They then immigrated to Israel in 1948, where Tom fought for the War of Independence that created the State of Israel. It was in Israel that they welcomed their second daughter, Miriam, in 1954.

In 1959, Haya’s aunt sponsored her and her family to go to the United States. The family of four sailed to America, finally settling in Oakland, where they raised their two daughters.

Haya began working at Ernie’s Bakery, which was owned by her cousin, and then later at the Safeway Bakery in MacArthur Plaza, where she worked for thirty years, churning out the most mouth-watering sweets you could ever taste.

Haya’s life revolved around her children, grandchildren and great-grandchildren. Her greatest joy was having family and friends over, feeding them her delicious food made from scratch, surrounded by the beautiful flowers from her garden.

She is survived by her two daughters: Ann and Miriam. Her six grandchildren: Missi, Jamie, Chase, Kalee, Layne and Ian. And her great-grandchildren: Maddy, Sami, Luke and Stella.

She died peacefully with her daughters and all her grandchildren by her side.

Devoted husband of 8 years to Margaret and of 52 years to Phyllis. Loving father to Shelley (Jeff), Laura, and Greg. Proud grandfather to Nicole, Jordan, and Brian. Paul cherished the memories of his older brothers Ted and Sam and his cousin Leonard and was beloved by his many in-laws, cousins, nieces, nephews, and friends.

Paul was born in Buenos Aires, Argentina, as Pablo Przepiórka, to parents Harry and Celia, immigrants from Eastern Europe who sought a safer home for their sons. With his family, Paul made it to the United States just before WWII, where he would grow up in San Francisco, ultimately graduating from UC Berkeley in 1953 and Boalt Hall in 1958.

Paul established his Oakland law firm, partnering with Morris Dangott and Alan Scharlach, and helped many in the community as a personal injury lawyer. A longtime supporter of social justice, Paul traveled widely with his family and devoted his leisure time to Oakland Athletics games, lowball poker, and reading novels. Everyone loved Paul for making a difference in so many lives.

In lieu of flowers, the family prefers memorial gifts to Jewish Family and Children’s Services of the East Bay or to the Alameda County Community Food Bank.

A memorial service was held April 10 at Temple Sinai in Oakland.

Ruth was a legal secretary in Oakland for many years. She loved cooking, music, and animals, especially cats. During her years living at Rossmoor, she was a member of Happy Hoofers Tap Dancers and Rossmoor ORT, where she previously served as Recording Secretary and Membership Chairperson. She will be deeply missed, but she will remain in our hearts forever.

Private funeral services were held under the direction of Sinai Memorial Chapel, and interment was at Home of Eternity, in Oakland on April 9, 2019.

Bob was known to be able to talk to anyone, anywhere, at any time. When you met him for the first time, he would immediately know your entire life story. He loved people. Bob had the gift of gab and even had his own language, which included “Bobisms.” He wanted to be known as “Nice Guy Bob.” He passed peacefully surrounded by his beloved family, friends, and dog Rudy.

Bob was born in Worcester, Massachusetts to Elfriede and Sydney Srebnick. Bob came to San Carlos as a young boy with his mother Elfriede Serbin, brother David Serbin, and his grandparents Bertha and Samuel Margulies, who all predeceased him. Raised by his mother and grandparents, who escaped Nazi Europe (Vienna) in August 1939, Bob learned a strong work ethic.

Bob began his 30-year career at Koret of California in 1977. He woke up early every morning excited to go to the office. During the time that the company was owned by Levi Strauss, they sent him to night school while working full time. He received his BS in Organizational Behavior and Human Relations from the University of San Francisco, which served him well. He subsequently ran Koret’s customer service department, making it a model department in the industry. He then was asked to turn around Koret’s retail outlet division or close it down. He proudly grew that division from 10 stores to over 70 stores across the country. He made life-long friends as a result of his career with Koret.

In 2007, Koret was bought by a conglomerate, and he was let go. But that did not stop Bob. He reinvented himself and went into the construction business. Along with a partner, he established a construction company, which he was quite proud of. Bob retired in 2014 and spent his days spending time with his beloved friends and family.

Bob met his beloved wife of 44 years, Cindi, as a teenager while members of United Synagogue Youth. They raised two children, Noah and Mallory Mitchell, whom he was so proud of. He also adored his son-in-law, Jermell Mitchell. He loved watching Noah and Mallory excel in their sporting activities while in school and then see them grow and have successful careers of their own. Bob was so proud that both of his children entered helping professions — Noah a police officer and Mallory a therapist. The light of his life was the birth of his grandson, Nadav, who was born two days before Bob’s second cancer surgery. Nadav brought such strength and love during the last three years. Bob and Cindi loved traveling with their family and close friends.

Bob and Cindi joined Peninsula Temple Beth El in San Mateo in 1988, where they both became quite active. One of Bob’s proudest times was his time as President of the Board of Directors. He proudly spoke of his accomplishments as President, including his instrumental role in the renovation of the synagogue and reinvigorating the temple Brotherhood. The community of PTBE has been so important to him. 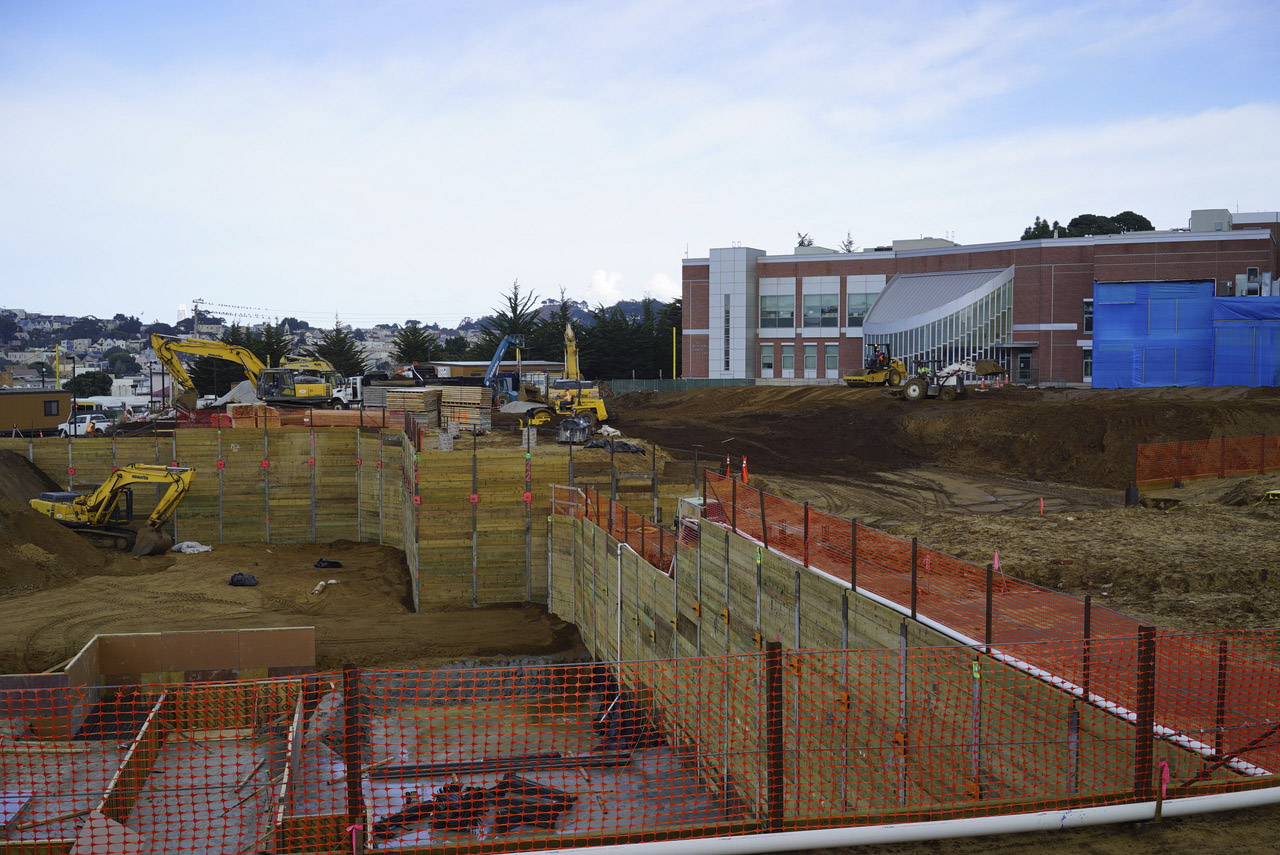