An upcoming exhibit at the Magnes museum in Berkeley brings to light a fascinating yet little-known slice of modern European Jewish history.

“El Lissitzky’s Chad Gadyo at 100” focuses on a recent gift to the Magnes Collection of Jewish Art and Life at UC Berkeley: a complete set of 11 colorful lithographic images by El Lissitzky, a Russian Jewish avant-garde artist born Eleazar Markovich Lisitskii in 1890.

A show highlighting the song, perhaps better known in modern times as “Chad Gadya,” is significant, says Magnes curator Francesco Spagnolo, if for no other reason than that these El Lissitzky illustrations are quite rare. The artist published an edition of just 75 copies a century ago, and only about a dozen of them have made their way into public collections worldwide.

Also noteworthy, Spagnolo says, are the contributions of the artist in the cultural world of the early 20th century and the context in which he worked.

As New York’s Jewish Museum makes clear on its website, El Lissitzky may not have been as widely known as Marc Chagall, a contemporary with whom he worked at the People’s Art School in Belarus, but he was a leader in the artist movement called Suprematism, a Russian abstract form that favored geometric shapes and patterns.

Before he embraced Suprematism, El Lissitzky was part of a group of Jewish artists who flourished in the early days following the Russian Revolution, Spagnolo notes.

Unlike their predecessors, the czars, whose dynastic rule was often marked by flagrant and numerous examples of anti-Semitism and anti-Jewish violence, the Revolution’s early leaders encouraged Jewish artists to honor their heritage with works that touched on their religion’s rich culture and history.

Contrary to the widespread belief that the Communist regime had always promulgated and enforced anti-Semitic policies, the initial post-1917 “Soviet leadership was open to Jews and their emancipation,” Spagnolo says. “There was a coexistence of Jewish ethnographic work,” including folktales, music and art.

“It was a time of great hope for many Jews,” he adds. “Jewish artists were allowed to express themselves in a Jewish vernacular.”

El Lissitzky’s “Chad Gadyo” is a striking example of Russian Jewish art being produced at that time. The beautifully rendered illustrations of the “goat song” — whose provenance, Spagnolo says, is decidedly not Jewish, but rather old Provençal French of the Middle Ages — are accompanied by Yiddish and Aramaic text.

Instead of stressing any kind of divine intervention in relating the song’s tale of the “cat eating the goat” and the eventual slaying of the Angel of Death by God, El Lissitzky focused on the “Soviet message” of “socially engaged art,” such as the image of a water carrier that exalts “human labor,” Spagnolo points out.

“Chad Gadyo” was El Lissitzky’s last known Jewish-themed work before he fully immersed himself in the Soviet avant-garde, says Spagnolo, who calls this work his “swan song” to his Jewish heritage. Plagued by poor health for many years, he died in 1941 at age 51.

By the time of his death, the celebration of the Jewish vernacular had long ended, says Steven Zipperstein, the Daniel E. Koshland Professor in Jewish Culture and History at Stanford University, who noted Stalin’s increasing paranoia about Jews and a concomitant decline in pro-Jewish sentiment among rank-and-file Soviets.

The gift of the “Chad Gadyo” illustrations was made by the family trust of a Berkeley couple, Ira Fink and Paula “Penni” Hudis, soon before Fink’s death at age 82 in April. The gift was made in honor of the late Seymour Fromer, the founder and director emeritus of the Magnes, to mark the 10th anniversary of his death, and the official name of the exhibit is “A Tsigele / One Little Goat: El Lissitzky’s Chad Gadyo at 100 (1919-2019).” In Yiddish, a tsigele means “a little goat.”

Hudis says the Magnes was “the perfect place for the ‘Chad Gadyo,’” in part because Fink, an architect and urban planner, was delighted when the museum in 2010 became affiliated with UC Berkeley, where he earned his master’s degree and doctorate.

During his lifetime, Fink amassed an extensive collection of architectural books about synagogues, Hudis says. Approximately half of these books, numbering in the thousands, also have been donated to the Magnes. 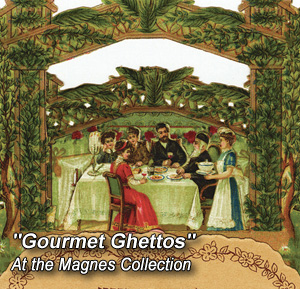 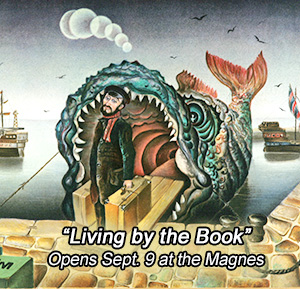