‘All you gotta do is listen’: Connecting at a Black-Jewish Shabbat marathon

I had wanted to organize a Black and Jewish community event for a long time, celebrating our shared legacy. The timing now more than ever seemed right considering the threat of Covid-19, the tense political-social climate, the deep pain and mistrust in the African American community and rumors of anti-Semitism within Black Lives Matter.

Together with my friend and collaborator, hip-hop celebrity Kosha Dillz, I wanted to create a safe, multi-community space and an evening of storytelling and healing through music, comedy, dance and conversation.

We decided to organize a virtual Black and Jewish Shabbat experience July 3 on Zoom, which we called Soul Vey.

I wanted to organize this Shabbat experience not only to represent my recently created nonprofit, Value Culture, which aims to connect new generations to culture and philanthropy, but also to represent my Jewish generation. It’s time for more of us to do the right thing, and for Kosha Dillz and me, that was getting battle-tested members of the Black and Jewish communities to converse, learn, laugh, share, listen, offer prayer, make music and heal with each other.

Of the many events I’ve put on, I was especially proud of this one. I learned that virtual events can work to empower and grow community. This event went an hour and 45 minutes over our expected finish time as people kept sharing stories … just like at a real Shabbat dinner!

What did I learn?

One of my many favorite parts of the evening was when we asked the Zoom room how we can be better allies to each other’s communities. I loved what everyone came up with. If only star wide receiver DeSean Jackson of the Philadelphia Eagles had attended the event, maybe he wouldn’t have shared his hateful, insensitive social media post about Jews. The former Cal standout is not a bad guy; he just needs some education on Jewish history (never quote Hitler), just like we need to learn more about the current issues in Black communities (which are not all anti-Israel/anti-Semitic).

The need for education was a popular answer we heard from many participants.

Shari Rogers shared a clip of her powerful new film “Shared Legacies,” a documentary about the Jewish contribution to the Black civil rights movement. She told us that she was inspired to do the film by Martin Luther King Jr.’s adviser, Clarence Jones, who wrote a book titled “What Would Martin Say?” She told us how “important it is for us to learn about each other and help each other.”

Another popular answer was listening — really listening. “How Jewish is that!” commented Rabbi Peretz Mochkin, pointing out that the central Jewish prayer, the Shema, is a commandment to listen.

My grandmother, Roselyne Swig, said that we should all “take it seriously and really pay attention” to the work of becoming better allies.

Akil, of the legendary hip-hop group Jurassic 5 and a Black Muslim man, noted that “we’re all human” and we all go through similar experiences. “That’s our common denominator. We are all part of humankind,” he said, adding that we are all on a “journey from one creator” together.

Activist Revital Iyov from Israel said we need to be “supporting each other’s cultural identities,” and that we should be calling in instead of calling out; we need to acknowledge that everyone has some form of prejudice, and we need to unlearn the hate we carry.

Maurice Olsberg from England said, quite simply, “listen to Black people.” Don’t divert from the topic, or make the issue about something else, he said. “All you gotta do is listen.”

Other suggestions included supporting each other’s businesses, starting businesses together, having more engaging, civil conversations and continuing to educate ourselves. Plus, of course, turning to music, dance, arts, comedy and love.

One of the most important things I learned from the event was that we as Jews need to celebrate the friendship we have with Black communities, and that more generations of both communities need to be reminded that historically we have been friends and that has never stopped.

Now, more than ever, we need to have each other’s backs, and support each other. Jews marched with Martin Luther King Jr. and still stand with the African American community today.

Education is key to successful allyship. We need to be better at educating each other’s community about our histories, cultures and commonalities. Let us never forget we are friends and family. We all come from the same place and our religions begin in the same place.

Time to throw the misconceptions out for good.

Tikkun olam includes the Black community, Jewish or not. Just listen to what Aklum, the Ethiopian Israeli educator, told the group: “I’m a proud Jew, and a proud Israeli, and a proud Black man. Black is beautiful.”

We need to work together so those in future generations, including my friend’s newborn son, Elijah, can grow up to be strong, proud, Black and Jewish. I want him to know that he can rely on both of his communities for support, Birthright for a trip to Israel, and that we’ll all be dancing together, the hora and the dougie, at his bar mitzvah party. 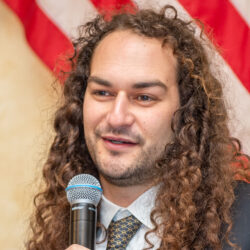 Adam Swig is the S.F.-based founder and executive director of Value Culture.