Aaron Keyak has been included in the Jerusalem Post list of the 50 most influential Jews of 2020. Keyak, profiled by J. in July, is a San Francisco native and head of outreach for Joe Biden’s presidential campaign. He was included on the list in the No. 20 spot along with two other Jews from the Biden campaign, “more for the influence they may wield after Nov. 3 than the influence they actively employ today.”

The S.F.-based Jewish Community Federation is honoring Nancy Grand with its 2020 Judith Chapman Memorial Women’s Leadership Award. Grand has held many prominent lay positions in the Jewish community, including development chair and vice president of the board of the JCCSF and senior vice president of the American Jewish Joint Distribution Committee. “Nancy is an authentic and accessible leader who has been a mentor and inspiration,” said Jan C. Reicher of the San Francisco Campus for Jewish Living in the Federation’s announcement. “She makes leadership look easy.” Grand will be honored at a virtual event later this year.

Manny Yekutiel has been nominated to the S.F. Municipal Transportation Agency board by Mayor London Breed. Yekutiel is the owner of Manny’s, a cafe and wine bar in the Mission District that also serves as a community meeting place, often presenting talks and events of civic import. According to the Examiner, Breed described him as a “regular rider of public transportation in our city” who “understands how critical Muni is to everyone in our city, especially our workers.”

Taube Philanthropies is giving its 2020 Jewish Peoplehood Award to filmmaker Roberta Grossman. Grossman is the director of several acclaimed documentaries, including “Blessed Is the Match” about the life of Hannah Senesh, “Hava Nagila: The Movie” and “Who Will Write Our History,” which premiered at the San Francisco Jewish Film Festival in 2018. “Roberta is a master storyteller of Jewish history, and for all of her filmmaking accomplishments, the foundation’s nomination committee was unanimous in recommending her for this award,” Taube Philanthropies executive director Shana Penn said in a press release. Created in 2011, the Jewish Peoplehood Award is given periodically; Grossman is the fourth winner of the award, which comes with a $10,000 gift.

Four Northern Californians are part of the new class of the Avodah service corps. Danielle Moyal of Alameda is working at Howard Brown Health’s Broadway Youth Center in Chicago, Rachel McKinnon of San Mateo is working at the Jewish Child Care Association in New York City, Roxy Rozo-Marsh of Berkeley is working at the National Immigrant Justice Center in Chicago, and Victoria Mohtes-Chan of Davis is working at Comprehensive Youth Development in New York City. They are part of a cohort of 74 young Jewish adults serving for a year with organizations advancing social justice in several U.S. cities.

Alix Wall — a contributing editor, correspondent and food writer for J. — recently covered a very Jewish Bay Area wedding for the New York Times. It was the story of Michael Chertok, 57, of San Francisco, and Anthony Sauler, 50, of Oakland, whose wedding was held at Hillel at Stanford and remotely officiated by Rabbi Mychal Copeland of Congregation Sha’ar Zahav in San Francisco. Chertok is the director of philanthropy for the S.F.-based Jewish Community Federation and Endowment Fund. The newlyweds met in 2016 on OKCupid, when each was mourning the loss of a pet.

After a 1.5-mile move, Moishe House Oakland-Temescal is now Moishe House Oakland-Rockridge. The house, whose three residents have their rent subsidized in return for organizing Jewish programs for their young adult peers, was the very first Moishe House, founded in 2006. It had been in Temescal since 2014. On Oct. 25, they held an event called “Temescal Reminiscing + Come Get Your Stuff,” during which friends of the house dropped by the front porch to catch up, share favorite memories of the Temescal house and comb through “a large free pile, of both our things and (maybe) yours!”

Rabbi Andy Kastner has left the Bay Area to become vice president of Jewish life at Combined Jewish Philanthropies, the Jewish federation of the Boston area. Kastner was formerly the interim executive director of the Jewish Federation of the East Bay, which he helped to integrate into the S.F.-based Jewish Community Federation. “I have been so nourished by the East Bay Jewish community,” he said in a statement. “The creativity, ability to lean into complexity, and connection to tradition truly embodies Reb Zalman Schachter-Shalomi’s vision of Jewish life being lived through the ‘windshield as opposed to through the rearview mirror.’”

Kate Sylvester has joined the S.F.-based Jewish Community Federation as director of human resources. She has previously worked for institutions such as SFJazz, SFMOMA and Stanford University. “Kate’s leadership will be a tremendous asset for the Federation as it recruits and nurtures the talent necessary for our team to achieve our strategic goals,” Federation CEO Danny Grossman said in a statement.

Rabbi Andrew Straus is the new president of the Northern California Board of Rabbis. Straus, who lives in Oakland, is the deputy regional director of J Street and also was the senior rabbi at Temple Sinai in Oakland for a few years. He is taking the reins from Rabbi Pam Frydman of Congregation B’nai Emunah in San Francisco; she will remain on the board as immediate past president.

Bella Ben-Shach is the new deputy director of the S.F.-based Institute for Curriculum Services. Previously, she has worked as a Jewish and Israel education program director of young adults and college students. Ben-Shach was born in the Soviet Union but grew up in the South Bay. She has a dual master’s in Israel studies and nonprofit management from Brandeis University.

Vered Cohen has joined Congregation Beth Sholom in San Francisco as executive director. She previously was the administrator of Congregation Netivot Shalom in Berkeley. “Vered is smart, driven and friendly,” synagogue board president Ellen Ginsberg said in an email to the congregation. “She is thoughtful and collaborative and clearly understands what lies at the heart of a shul.”

Russian-born Silicon Valley tech investor Yuri Milner and his wife, Julia, have announced a $10 million gift to the Wharton School of the University of Pennsylvania. The funds will provide full-tuition scholarships to 60 Israeli MBA students attending Wharton over the next 10 years. “As a former international student myself, I know the transformative impact that an education in America and at Wharton can have,” Milner said in a press release from the university.

To submit some community news for next month’s Our Crowd, email david@jweekly.com. 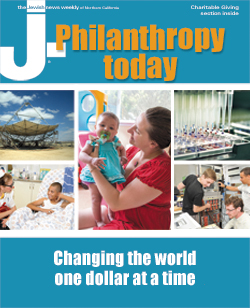