I’ve been the family historian for 20 years. Here’s our story.

Over the past 20 years, I’ve become my family’s family historian. The passing of my father Hershel Herzberg — the last of his generation — inspired me to tell his life story in this week’s J.

Hershel Herzberg (1934-2020) was an Army veteran who aspired to be a lawyer. Instead he became a high school teacher, earned a master’s degree in American history and served the San Mateo Unified School District as a social studies teacher and curriculum writer for almost 50 years.

He and his family were fortunate to have lived in San Francisco during World War II. After the war, he was drafted into the Army, and from 1957 to 1959 he served as a soldier in postwar Germany, living in former SS officer quarters at Dachau, the concentration camp outside Munich. His role was to calculate the trajectory of big guns in the event of a Russian invasion.

My dad’s knowledge that it could have been his family at Dachau had a profound influence on him throughout his life. He served in the Army Reserves from 1959 to 1963.

Hershel’s ancestors were pioneers in the Jewish community of the American West.

His grandfather, Rabbi David Radinsky, helped launch the first Orthodox Hasidic congregation in Denver in the late 1880s and early 1890s. Congregation Zera Abraham (the seed of Abraham) is still in existence today.

David served as rabbi and masmid, a Talmudic judge who was responsible for the resolution of disputes between Jewish businessmen, and as such was precluded from doing business himself.  Because rabbis could not financially support the family, his wife, Rosa Leah Brenner Radinsky, launched the Continental Trading Corporation (a rag business) in 1892 to service the railroads that went through Denver. The rag business became financially lucrative, and eventually evolved into a national hotel and restaurant linen business.

In 1902, the entire Radinsky family of 10 traveled to Israel so that David could pursue religious studies in Mea Shearim in Jerusalem. His industrious wife, with a small group of dedicated women, initiated fundraising for and the eventual founding of Ezrat Nashim, which became the first mental health hospital in Jerusalem.

Rosa Leah and the other founders took care of the hospital, visiting the sick, running the office and keeping the books.  A photo taken in Jerusalem in Ottoman Palestine in 1902 showed Rosa Leah seated in the middle of the women, surrounded by seven co-founders, including the mother of Israeli President Reuven Rivlin.

When the family returned to Denver, the successful business Rosa Leah had started helped fund the operations and maintenance of Ezrat Nashim, which grew over time.  This hospital today has been renamed Herzog Hospital, after Sarah Herzog, the daughter of the chief rabbi of Israel, and has become the largest mental health hospital in the Middle East.

The family found its way to the Bay Area when Rabbi David developed a breathing condition and moved westward with his wife. Together they would start one of the first kosher grape operations in the Napa Valley, according to the Napa County Historical Association.

My grandmother Eva, the youngest of the Radinsky children, used to be put on a train from Calistoga to San Francisco on Shabbat to stay with Orthodox families. It was at one of these weekends that she met Samuel Herzberg, the son of Bernard Herzberg and Fannie Schmulian from Lithuania. My grandfather and namesake.

They would have three sons and a daughter, Shana Riva, who died at a young age. My father Hershel was the youngest, born 14 years after his closest brother. He always said he was a replacement for his sister Shana Riva.

Bernard, my great-grandfather, studied at a gymnasium (a secondary school in Germany) and was able to communicate fluently in German. He learned the real estate business while working in the late 1890s for Adolph Sutro, the mayor of San Francisco from 1894 to 1896. Bernard attended the Webster Street synagogue in the Fillmore neighborhood before becoming a founding member of the large Reform synagogue, Temple Emanu-El.

After the 1906 earthquake, the family business purchased a number of large homes all over San Francisco which my father lived in growing up; however, due to the Depression, many of these were lost.

My father, whose death notice in J. can be read at tinyurl.com/hzh-jobit, became a humanitarian with a passion for teaching.

Hershel and my mother, Dorothy Crews from Scarsdale, New York, met as volunteers in one of the first Peace Corps delegations, from 1961 to 1963 in Nigeria. They married in Nigeria in 1962. Herschel would later train future Peace Corps volunteers at UC Berkeley and Morehouse College in Atlanta, where he got to meet Martin Luther King Sr.

I was my parents’ first-born child, born after my parents returned from Nigeria to San Francisco, where my sister, brother and I would become the third generation of San Franciscans on his side of the family.

My father would often tell his students, “Copy my good points and not my bad points, and have the wisdom to know the difference.” He took the same personal approach to studying the lessons of history.

My dad loved to write curriculum for the high school district, the Holocaust Center of Northern California and the State of California. Unlike others who left teaching behind after retiring, Hershel continued as an “all subjects” substitute teacher for another 15 years.

My dad lived out his values, including as a champion of San Francisco’s tolerance for others, as well as the lessons of public service he learned as a former veteran and Peace Corps volunteer. He cherished his experiences as a teacher, so that future generations could learn from history, and not repeat its mistakes. 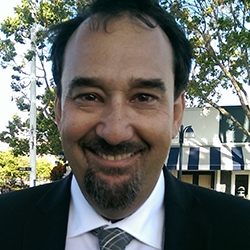 Sam Herzberg has served as senior planner for the San Mateo County Parks Department. He lives in San Carlos.