As a Holocaust survivor, I feel angst over what’s going on in Ukraine

This should be a week of celebration for me: turning 98 in Berkeley, still walking with a spring (and not a walker!), with most of my wits, a lot of passion and much nostalgia. Also I’m alive to celebrate another Passover, reliving the freedom of the Jewish people.

Instead I wake up with a jolt, with nightmares of boots marching, bombs exploding.

With anxiety, I listen to the news of Russia invading, advancing, bombing, devastating Ukraine. (Alexa reads me the news as I have macular degeneration.)

Every day is worse. First there was the bombing of Babyn Yar — visions of piles of bodies in my mind. Then, the deluge of refugees, packed into trains: Will they get out? The babies born in shelters amid bombardment. The dead lining the streets of Bucha: raped, handcuffed, burnt, tortured. Not enemy soldiers, just people trying to stay alive.

As a Holocaust survivor, I feel pain and anxiety ever more deeply. The images I see remind me of the vivid scenes of Nazi terror and occupation. I was handcuffed and then imprisoned in an internment camp in Nexon in the winter of 1941. There, too, I saw people dying as their persecutors laughed.

One of my nightmares that I relive during the Ukraine war has me caught in the middle of artillery fire between the Nazis and Americans in the south of France in August 1944. At that time, I imagined all was finally safe. I had finally managed to get some fresh eggs from a farmer. Amid the blasts, just feet away from me, I jumped into a ditch and, in my anxiety, crushed the very, very expensive eggs (which would have been a rare treat).

RELATED: The surreal life of 200 Jews at a 4-star resort in wartime Ukraine

Worse than the memories is the profound disappointment in humankind.

What I can’t believe — what I can’t fathom — is that this is happening now.

I do take solace from several developments that are far different from what happened during the Holocaust: The world is not only watching but reacting, protesting, sending aid, sheltering, supplying arms (not enough and not soon enough). Ukraine has a bold, articulate Jewish leader in Volodymyr Zelensky. And video cameras are recording the horrors of genocide and most people in the world are seeing it all  in real time on their smartphones.

The other change for me is that I’ve joined a Zoom group of Holocaust survivors that meets every week through S.F.-based Jewish Family and Children’s Services.

We have so much in common, and my fears, anxieties and hopes find an echo in our discussions, activities and Jewish rituals.

As we sang “Dayenu” at our seder last week, I was moved beyond words. And I felt our deep bonds of support and compassion. 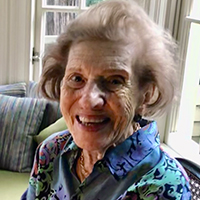 Monique Joseph of Berkeley was born in Cologne, Germany in 1924 and fled to France with her family in 1933. She was imprisoned twice, escaped on New Year’s Eve 1942 and lived the rest of the war in hiding with false papers.