For all its weighty, bittersweet symbolism, Passover is at heart a celebration.

Nowhere was that more apparent than at the Jewish Community Center of San Francisco's 19th annual first-night seder, enhanced this year by the addition of live klezmer music.

Some 400 guests filtered into the huge JCC gymnasium on Friday of last week. The seven-piece klezmer group L'Chayim, led by snowy-haired Rabbi Sholom Groesberg, played with all the intensity of a high school band trying to win the talent show.

Klezmer, the traditional Jewish folk music of Europe, relies on instruments like clarinet and accordion for its distinctive sound. The songs themselves reflect a multinational blend of Jewish identity in which Yiddish, Hebrew and English all have their places.

This year's JCC seder drew twice as many guests as last year's. More than 100 people signed up in the final 24 hours alone. Lenore Naxon, director of development for the JCC of S.F., helped plan the event and was not surprised by the strong response.

L'Chayim was formed three years ago in the East Bay and its repertoire links traditional Jewish folk songs with American show tunes and jazz.

Among those who came to see the band were Gert and Ruth Marcus, refugees from Nazi Germany. After fleeing to Beijing in 1938, they ultimately settled in Daly City. Gert Marcus, a cantor who once officiated with Groesberg at Temple B'nai Torah in Antioch, carries a worn black-and-white wedding picture in his wallet and pulls it out on the slightest provocation.

Ruth Marcus, who was at the JCC seder for the first time, was taken with Israeli-born singer Ruti Magadish, who played tambourine and sang traditional Passover songs in high, clear Hebrew.

"Isn't she lovely!" Ruth Marcus exclaimed. Wearing a long, white dress adorned with fresh flowers, Magadish performed what she called "scarf dancing," reminiscent of May Day ribbon dancing, to celebrate the renewal of spring. She was a particularly big hit with the young girls in the room, who flocked to her side throughout the evening.

Groesberg, now retired from both his Antioch pulpit and a career in engineering, led not only the band but also the seder. He guided the large crowd with humor and ease, pausing for familiar songs, readings by audience members and explanations of the history of certain parts of the ritual.

As is customary in Jewish homes everywhere, he skipped a few pages to hasten the meal.

As the evening wore on, a dance floor was cleared and many guests stayed late for Israeli folk dancing.

"The beautiful thing about Jewish people is that they always find unusual ways to celebrate," said Nate Levine, the JCC of S.F.'s executive director, "especially in a place like San Francisco, where traditions are made to be broken." 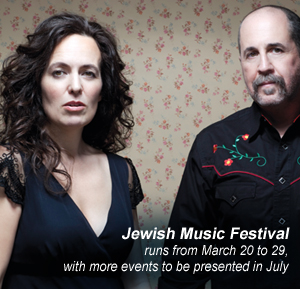