HIGHLAND PARK, N.J. — Three employees are hunched over a long butcher-block table that takes up most of the small room. They pour batter and squeeze filling into various aluminum tins bound for the kosher-for-Passover ovens in Schick's Pesach bakery.

To get from the table to the ovens they have just enough room to walk down a crowded aisle between bakery machines. The bakery itself takes up two apartment-sized spaces on either side of Schick's Bakery in Brooklyn.

The pesachdik bakery has its own tables, bakery racks, ovens, mixers and other equipment. And to get from the baking side to the packaging rooms, employees walk outside.

From the shop in Brooklyn, kosher-for-Passover food is shipped to supermarkets, bakeries and homes all over the country. And then there are the loyal customers who arrive early in the morning on Sundays preceding Passover and stand in a line that reportedly runs down the street and around the block for treats like cheese pie (cheesecake by another name), chocolate rolls, cookies, macaroons and Parisienne tortes.

"Schick's bakery is known all over for the best cakes," said Sima Schall whose husband collects orders through the Highland Park Conservative Temple and drives a van to Brooklyn to pick up the goodies. "It's not just temple members, but people know we do this every year and order through us. A few of my friends go to the bakery before Pesach. They like to go on a Sunday and get there very early."

Schick's, which stopped selling chametz before Shabbat on March 12, reopened selling Passover products on March 16. It closes for the first two days of the holiday, but reopens during Chol Hamoed, the middle days of Pesach.

It's a family owned and operated business. Moshe Braunfeld and Chaim Widawsky, both concentration camp survivors, bought the bakery in 1960. About 15 years ago, their sons came on board.

"It was time for the next generation to pick up the load for the family business," said Chaim Braunfeld, who was a college English teacher before taking the helm of the bakery business. "Now I spend less time putting on an apron and more time at the computer."

One achievement he's proud of is a line of "high quality gourmet cakes" he developed. The younger generation also brought in other features like computer-generated labels complete with bar codes and UPC symbols. Innovations like that appealed to grocery chains, like Giant Foods, which sent a truck to pick up a shipment of about 300 boxes of various Passover delicacies earlier this month.

Customers can find Schick's products in many kosher supermarkets and bakeries.

In Highland Park, Lachmaynu kosher bakery cleans the store for Passover and then stocks Schick's products exclusively. In fact, Yakov Stiel, owner of Lachmaynu, is also a distant cousin of Schick's owners. If you go back five generations in his family and four in Braunfeld's, they share the same grandfather who operated a bakery in Krakow, Poland.

Passover has always been an important part of Schick's business. "It's very intense," Braunfeld said during an interview from his office, a cubicle with a computer and a small desk, in the bakery. "It's tremendous work. Every year we say, 'How did we get through it?'"

He said the trick is in the timing.

"By keeping to a disciplined timetable," Braunfeld said, "it becomes possible."

Pesach baking starts around Purim and production increases as Passover draws closer. On March 11, before the Passover storefront even opened, the Passover bakery was operating from 7 a.m. to midnight with between 10 and 15 employees, said Sariel Widawsky, vice president in charge of production and Chaim Braunfeld's cousin.

"As we get closer to the holiday, we go into 24-hour shifts," Widawsky said. "Being a family business, we take more family members who come in to help."

Despite how busy it is during Passover, the younger Braunfeld still makes sure he finds time for his Jewish studies. He hasn't missed a day of Torah study since he began a Daf Yomi (page of Talmud a day) project nearly two years ago.

To ensure the kashrut of the bakery and that the Passover bakery is chametz-free, employees are scheduled to work in one bakery or another. "It's carefully monitored and a mashgiach (who oversees food preparation) is on duty at all times," Braunfeld said.

The Schalls are not the only customers who return year after year, Braunfeld said.

"Over the years there's a relationship that's built up. There's a great excitement the Sunday before Passover. There will be 100 people in line. We see them year to year." 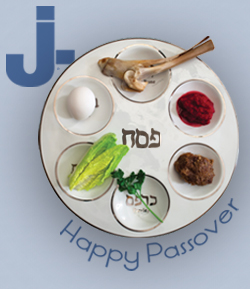