A giant painted chicken once stood at the entrance to Petaluma.

George Nitzberg, 76, remembers it from his childhood.

That was back in the 1930s, when Petaluma wore the proud title of “Egg Basket of the World” — back when hundreds of long, low wooden chicken sheds dotted the fertile valley, producing millions of eggs a year that were transported throughout the country.

Among the thousands of chicken farmers who worked that land were several hundred Jewish families — idealists, socialists, Jews from the shtetls of Eastern Europe and the sweatshops of New York’s Lower East Side, young men and women who dreamed of escaping urban poverty and mixing their labor with the soil of the earth.

“The word went out there was a chicken community here in Petaluma,where Jews could make a living,” says Nitzberg, who moved there from Los Angeles with his mother in 1925. “So we all got together.”

Today the Sonoma County community is absorbed into the Bay Area’s suburban sprawl. Some of the old chicken sheds are still standing — their roofs caved in, their paint peeled off — but the chickens moved out long ago, when the small family farms were bought out, one by one, in the 1950s and 1960s.

But 75 years ago, when Petaluma was a sleepy farming town of fewer than 5,000 residents, it was also home to a unique American Jewish community of socialist farmers.

Like the early kibbutzniks, many of Petaluma’s pioneers rejected the bourgeois institutions of marriage and organized religion.

Others experimented with vegetarianism and anarchist ideas, growing their hair long and living communally — at least until they started having children.

The socialist pioneers started arriving near the end of World War I. For some, Petaluma was only a stopping-off point on their way to Palestine or Soviet Russia. But most stayed.

They brought their newspapers, their political parties and their Zionist organizations, and for several decades maintained a tiny oasis of Jewish internationalism in Northern California’s agricultural heartland.

“These people did not follow the customary pattern of east European immigrants migrating to enclaves in the great eastern cities, the children migrating to new suburbs and the assimilated grandchildren spreading out across the American map,” writes Kenneth Kann in “Comrades and Chicken Farmers,” his 1993 study of the Petaluma Jewish community.

“These Jewish immigrants settled on California chicken ranches and established a vibrant political community that combined socialist and Jewish internationalism with the parochialism of an ethnic minority in small-town America. From their Petaluma chicken ranches they maintained a world political and cultural perspective, [one] they knew was lost on succeeding generations.”

The children of that founding generation stayed in Petaluma, taking over the chicken ranches from their parents, and then moving into other fields as the chicken industry collapsed in the mid-’60s.

The third generation, the baby boomers, mostly left the area.

Gussie Sovel, 98, is one of just two survivors from the original group of Jewish pioneers still living in Petaluma. Born in Galicia, she immigrated to New York in 1917 and then came to Oakland in 1919. There she met and married Ben Sovel, a Bialystok-born Petaluma chicken dealer.

When she followed her new husband back to Petaluma in 1923, it was a shock. “There were maybe 20 Jewish families,” she says.

The couple bought their own chicken farm, raising up to 15,000 chickens at a time, in three-month cycles.

After Ben lost a leg in 1927, Gussie took over both the dealership and the farming business. Her world revolved around eggs, feathers and nightly meetings of the International Workmen’s Circle, the Jewish socialist organization to which Ben and most of the other Petaluma Jews belonged.

“As the years passed, many more Jews came, from New York, Chicago,” Gussie says. “We had a wonderful community, more than 120 families in the Workmen’s Circle. So warm. Like a little kibbutz.”

Most evenings there were “political meetings,” which were primarily social get-togethers.

The founding members of the community were, like the early kibbutzniks, intellectual farmers who chose agricultural work for ideological reasons, and who never neglected the world of ideas.

But political divisions ran deep, almost from the beginning. The early Petaluma Jews were virtually all socialist but soon split into left-wingers and right-wingers, the left being Communist Party members or close sympathizers, while the right were more casually socialist.

In addition to that main political bloc, there were a handful of religious Jews who maintained a modicum of Jewish ritual life.

For their benefit, when the Jewish Community Center was built, a tiny room was grudgingly allocated for “the shul.”

Some Labor Zionist families arrived in the 1920s. Several of them moved on to pre-state Israel. Among them were Batya and Louis Menuhin, aunt and uncle of violinist Yehudi Menuhin. Petaluma residents remember the entire community dressing up and driving to San Francisco’s Civic Auditorium the night Yehudi Menuhin gave his debut concert.

Petaluma’s Jews didn’t mix much with their non-Jewish neighbors. Most of the time, relations were cordial, but tempers flared during times of national political tension, such as the Depression and the McCarthy era of the early 1950s.

Nitzberg remembers the night of Aug. 22, 1935, when right-wing vigilantes tarred and feathered his father, Sol, a staunch Communist Party member who had been organizing local apple-pickers to strike for higher wages and better working conditions.

The Sonoma County Grand Jury indicted 12 men for the crime. All were acquitted.

After the trial, the Nitzbergs left Petaluma for a few months, making their way slowly to New York; Sol intended to go to the Soviet Union.

“Thank God Stalin didn’t let us in,” his son says. “He stopped taking immigration just then. Otherwise, we would have gone.”

The family returned to Petaluma, where George Nitzberg later bought his own chicken ranch. He operated it until 1963 or 1964, when prices plummeted and he sold out.

The empty chicken sheds still stand in his backyard. One has been refurbished and is used by a local charity to sell antiques and used goods. “I rent it to them for a dollar a year,” Nitzberg says.

The postwar 1940s represented the golden era for Petaluma’s Jewish chicken farmers. But their world came crashing down in 1950, when Sen. Joseph McCarthy’s blacklists and Communist witch-hunts spawned a nationwide red scare.

In Petaluma, the Jewish community split right down the middle. In one fell swoop, the right-wingers, anxious to avoid being tarred with the same brush as their Communist Party friends, passed a resolution kicking leftists out of the JCC.

After the split, Jews who had been bosom buddies simply stopped speaking to each other, some for decades.

His mother says that after the split she didn’t set foot in the JCC for many years. “We were the main group there, about 250 of us in the Workmen’s Circle, and they told us to turn over our books one day,” she says.

“Most of our group never went back. It hurt. We were the ones who built that JCC.”

The tallest buildings standing today in the farmlands outside downtown Petaluma are the grain silos of the Barlas Feed Co. The company used to belong to Leon Barlas, 85, who came to Petaluma as a toddler in 1917. His father, a Russian-born coppersmith, went into the poultry feed business in the 1920s.

After graduating from high school in 1934, Leon studied modern farming methods by visiting supermarket chains in the Midwest. He returned to Petaluma with the drive and knowledge needed to buy out the small, family-owned farms that could no longer compete with the low-priced chickens flooding the market from huge ranches in Georgia and other Southern states.

Through the ’60s, as the smaller Jewish chicken ranchers failed one by one, the Barlas brothers bought them all, until, he claims, “we were raising 95 percent of the chickens in Sonoma County.”

But even the Barlas boys couldn’t hold out forever against the megacorporations. By the late 1970s, Barlas was renting out the chicken business to an outside firm. He finally sold the feed mill just two years ago. But he still owns the land the chicken sheds stand on.

After 80 years on the same property, it’s hard to let go.

Most of the ex-chicken farmers went into other businesses. When Nitzberg sold his chicken business in the mid-’60s, he became a plumber. Sol Fishman, 88, opened a janitorial supply business after selling the chicken business that had been in his family for nearly 50 years in 1967 — “at a great loss,” he says.

As members of the second generation married and had their own families, they rejected their parents’ intensely communal lifestyle and its lack of individual privacy.

“Before television, people would just drop by, without invitation,” says Lil Krulevitch, who was born in Petaluma in 1920. “Then television came in, and it all changed.”

Krulevitch and her husband got out of the chicken-farming business in 1958 and started a retail and wholesale egg delivery route. She still owns their farm but leases it to a local trucker.

As the founding generation aged and died, the religious JCC lost its impetus and was finally taken over by Congregation B’nai Israel in 1976. Now, religious services are held in the grand social hall.

The Jewish community today is run by young professionals who moved to Petaluma in the 1970s and 1980s. Bill Sovel’s son Barry says he’s the only member of the third generation he knows who attends the local synagogue.

“They call me when they need a minyan,” he says.

Forty years after the “great split,” hurt feelings are beginning to mend. Most of the oldtimers have adjusted to the change. Gussie Sovel is a dues-paying member of the synagogue and shows up for High Holy Days when she can. Krulevitch helps prepare snacks for synagogue events.

“But we all still call it ‘the center,'” Fishman says.

There are still chickens in Petaluma but they are no longer a big money-making operation. And there are no Jews left in the business from the original, pioneering generation.

“I didn’t want my kids to go into the chicken business,” Fishman says. “It was too hard work. Looking back, I don’t know how I did it.” 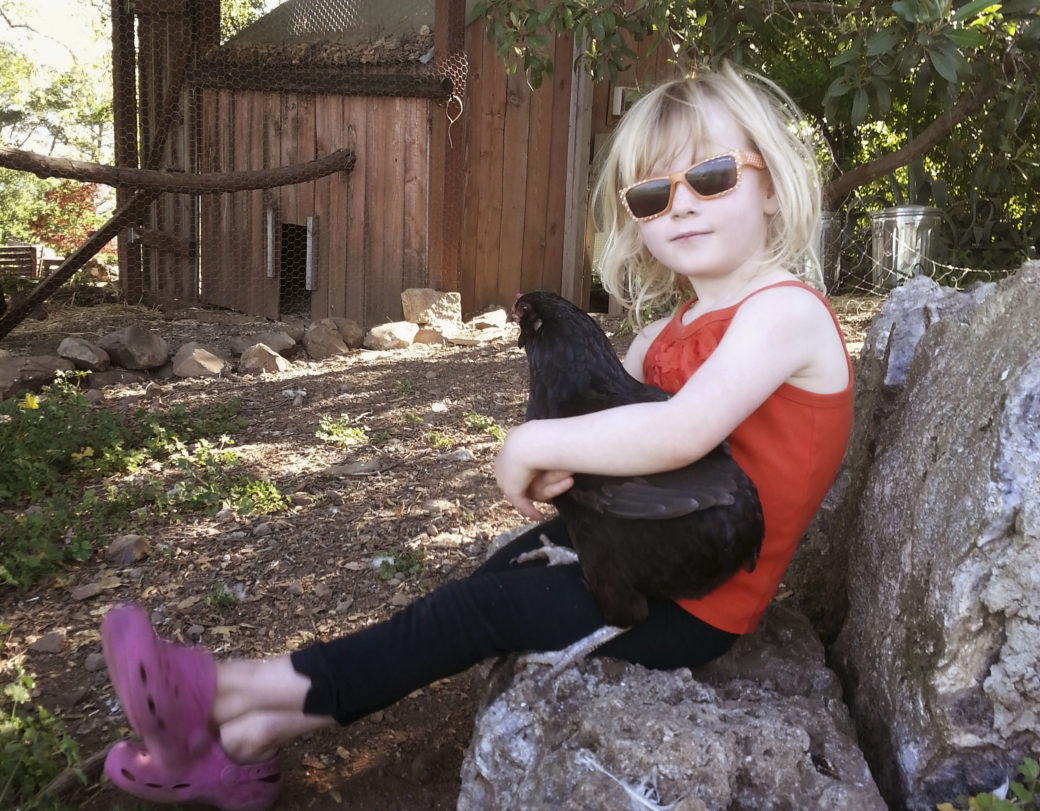